It is rare that one finds medieval art or sculptures in Australia and probably the last place on would expect to encounter such would be in the Australian War Memorial, built in 1936 to commemorate the sacrifice of Australians who have died in war (essentially since the mid 1800s).

On entering the War Memorial you will encounter two lions, one on your right and one on your left, sentinels guarding the walkway to the Hall of Memory and the Tomb of the Unknown Soldier. 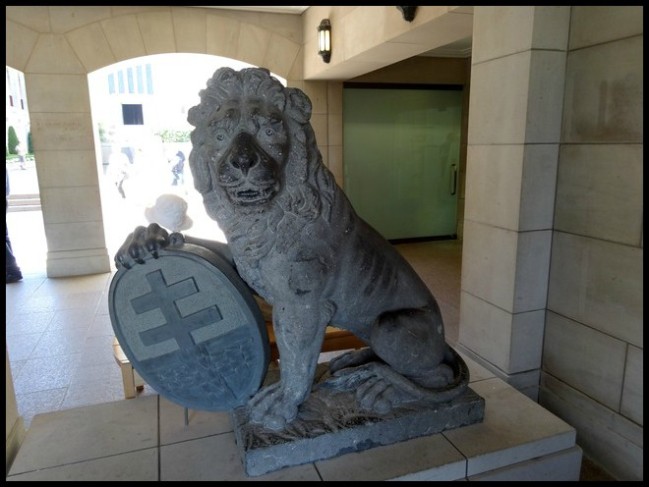 Australian War Memorial literature indicates that the limestone lions, recovered from the Menin Gate at Ypres (now Ieper), Belgium toward the end of WWI were gifted to Australia in 1936 by the burgomaster (mayor) as a token of friendship and an acknowledgement of Australia’s sacrifice. In return Australia presented Ypres with a bronze casting of C. Web Gilbert’s sculpture Digger which is now on display in the Salient 1914—18 War Museum in the rebuilt Cloth Hall in Ypres.

It is interesting to note that there is no record of other Empire countries (Canada, Newfoundland, New Zealand, the UK, South Africa or India) having received any gift from Ypres. A statue from the Cloth Hall in Ypres currently in the Auckland Museum is thought to have been “souvenired” by an officer as opposed to having been gifted to New Zealand.

An alternative, and probably more precise, view as to how the lions came to be in Canberra is that, the then, Australian Ambassador, Bruce actually asked for the lions specifically for the Australian War Memorial then being built in Canberra and his wish was granted.

Where were the lions between the early 1920s and 1936? Yet another view, perpetuated by some local Ypres townsfolk is that Australian soldiers had already “self-gifted” themselves the lions and they were indeed already in Australia – hidden until the 1936 official gifting or request. 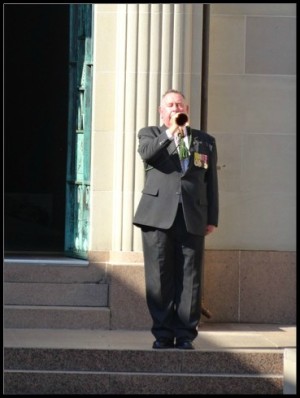 How the lions officially came into the possession of Australia doesn’t really matter any more. For others, and indeed Australia, the daily Last Post Ceremony performed, to this day, by the Ypres firemen is ample thanks for Empire sacrifices in Ypres and Belgium. If you can, time your visit to the Australian War Memorial to coincide with its daily Last Post Ceremony which is held at 5pm (as the Memorial closes).

The lions (which each carry the coat-of-arms of Ypres) are thought to date back to the eleventh century and in later years to have stood at the entrance to the Cloth Hall, Ypres’ civic and commercial centre. In the mid to late1800s on the occasion of the refurbishment of the Cloth Hall the lions were moved to the Menin Gate which was really one of two cuttings (as opposed to a gate) in the towns medieval ramparts as you may discern in the picture below – a pre war postcard of the old Menin Gate.

The lions stood and welcomed thousands of (and simultaneously farewelled, to their death, so many)  Allied (mainly Empire) soldiers as they made their way to the Western Front during World War I. Over 36,000 Australian soldiers were killed or wounded on the battlefields of the Ypres Salient, most of them during the battles in 1917. Over 6,000 of them have no known grave and are now commemorated on the Menin Gate Memorial.

During the war the lions (most of the town was destroyed) were badly damaged by German artillery fire and, while recovered from the rubble, they were not incorporated into the Menin Gate Memorial built in 1927 – though it does include a single much larger lion which sits atop the Memorial.

Until 1985 the lions (for the most part one only) were displayed at the War Memorial in their original damaged state. Between 1985 and 1987 the lions were restored by Kasimiers L. Zywuszko, a Polish-born sculptor. The restoration work was deliberately not ‘blended in’ such that visitors can easily distinguish the restored from the non restored. In 1991 the lions were again put on display at the Memorial, in the position you see them today.