This review is on the building and sculptures around it. For details of my internal visit see my separate review – Visit Chairman Mao Zedong.

The Chairman Mao Memorial Hall or Mao’s Mausoleum is located at the southern end of Tiananmen Square between the Monument to the People’ s Heroes and Zhengyangmen Gate. The size of the square and buildings like the Great Hall of the People and the National Museum, which flank the square, make the mausoleum look much smaller than it actually is. Do not be mistaken, this is a massive building covering an area of 57.2 thousand square meters, 220m from east to west and 280m from north to south.

Large though it is, the building was built in around 10 months – testimony to the industriousness of the Chinese people and the pull (or push) of the Communist Party. The foundation stone for the mausoleum was laid in November 1976 and the mausoleum opened in September 1977.

Looking at the boxy building, the standout features are the forty-four granite columns standing on a burgundy Sichuan granite base and holding up a golden glazed double-eaved roof – a stylised Chinese look, for sure, but with a strong undertone of Soviet brutalism.

The white marble plaque above the main entrance (north side) is embossed: “Chairman Mao Memorial Hall”

Building materials for the Hall (and indeed builders) were sourced from all over China. In addition to the Sichuan granite I referred to above, pine rocks came from Jiangxi, color pebbles from Nanjing, milky quartz the Kunlun Mountains, rock samples from Mount Everest and very rare Phoebe nanmu wood (used in the doors and walls of the Hall of Mourning) from Hainan Island.

The Mausoleum sits on the former site of the Gate of China (Zhonghuamen – formerly the “Great Qing Gate” – Daqingmen), the southern ceremonial gate of the Imperial City during the Ming and Qing dynasties which was demolished in 1959 during the communist development of Tiananmen Square.

While the main part of the building is given over to the Hall of Mourning for Mao Zedong and his larger than life statue in the adjoining Great North Hall, halls on the second floor celebrate the revolutionary achievements of comrades Mao Zedong, Zhou Enlai, Liu Shaoqi, Zhu De, Deng Xiaoping and Chen Yun. These halls are generally not open to the average tourist. 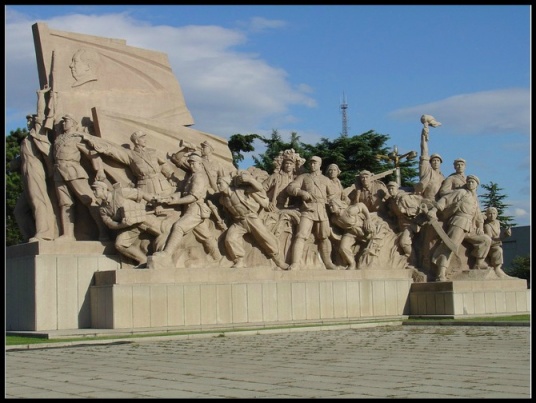 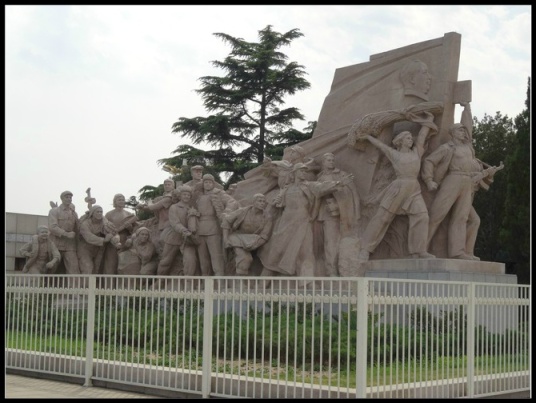 The sculptures to the north of the Memorial Hall depict scenes from the Revolution and some of the great achievements of the Chinese people under the leadership of Chairman Mao and, in so doing, present a socialist realist interpretation of the national struggle presented via the nearby Monument to the People’s Heroes.

The sculptures to the rear (south) of the Memorial Hall depict the New Democracy period and the Socialist Construction period under the theme of “Carry the cause of our revolution through to the end.”

In all there are over sixty individual clay figures, each around 3.5 metres high, brought together in the four groups rising to almost 9 metres high. The sculptures were completed in less than five months by over 100 sculptors from 18 provinces.

This blog entry is one of a group (loop) of entries based on a number of trips to Beijing.  I suggest you continue with my next entry – Visit Chairman Mao Zedong– or to start the loop at the beginning go to my Beijing Introduction.