No-one outside North Korea really knows how many people died in the 1994-2000 famine and estimates range from 240,000 and 3,500,000. The collapse of the Soviet Union left the country without its traditional external support, a series of droughts and floods lead to failed harvest after failed harvest and the centrally planned economic system failed so disaster resulted.

So, what do you do when your country is going through a horrific famine and thousands of people are dying of starvation or hunger-related illnesses? END_OF_DOCUMENT_TOKEN_TO_BE_REPLACED

It had been a long day but having finished dinner around 10pm there was still one more activity prior to calling it a day. It was time to eat some some petrol baked clams. END_OF_DOCUMENT_TOKEN_TO_BE_REPLACED

We had been up since around 6am so when we arrived at our hotel, the Ryonggang Hot Spring House, at around 8pm we well and truly needed a rest. But no, before we were given our room keys we had to eat dinner first. Such is the life of a tourist in North Korea. END_OF_DOCUMENT_TOKEN_TO_BE_REPLACED 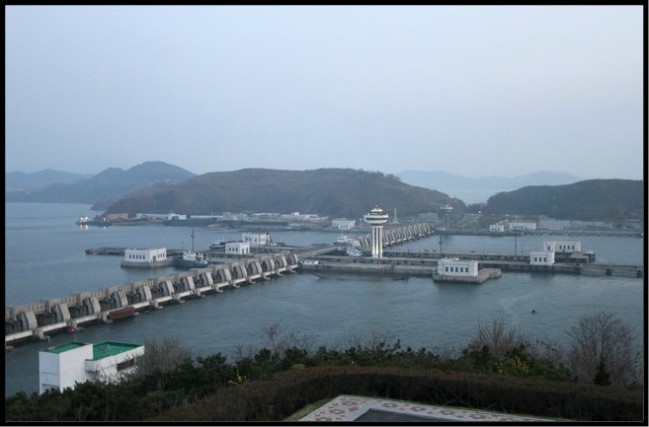 The 8km long, $4billion, West Sea Barrage across the mouth of the Taedong River was completed in 1986.  It was designed to manage water levels in the Taedong River and alleviate irrigation and drinking water problems in the region. The exact location for the barrage was, we were told, personally selected by the Great Leader, Kim Il-sung, – engineering, hydrology and geology being but a few of this great man’s limitless talents. END_OF_DOCUMENT_TOKEN_TO_BE_REPLACED

Those who have read others of my North Korea entries will be aware of what North Korea thinks of the United States. Since 1866 when the US warship, the General Sherman, was destroyed and all its crew killed after it sailed up the Taedong River seeking to engage in trade with, and land missionaries in, the country against the expressed wishes of the Korean Imperial Court, the United States has been seen as the very devil incarnate. The US continues to be held responsible for everything negative in North Korea. Every opportunity to demean, belittle, humiliate and insult the US is availed of. END_OF_DOCUMENT_TOKEN_TO_BE_REPLACED

Nampo (or Namp’o), having started out life as a small fishing village, is now North Korea’s most important industrial and port city. It is located about 50 kms to the south west of Pyongyang and 15km from the mouth of the Taedong River. END_OF_DOCUMENT_TOKEN_TO_BE_REPLACED