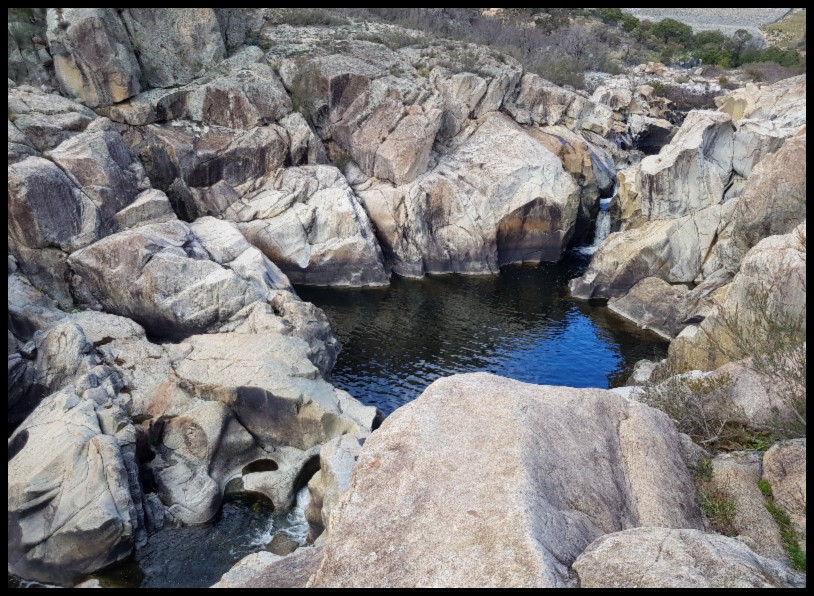 At about 200 metres return this is the shortest and easiest, noting that there are some steps, walk in the Googong Foreshores reserve. If you just walk in and enjoy the views then you can easily complete the walk in 15 minutes.

In addition to enjoying the views from a couple of viewing platforms, assess to the Queanbeyan River, down from the Googong Dam wall, is permitted. You may enjoy, in addition to a scramble across the rocks, a swim or a paddle in one of the icy cool rock pools: Perhaps not a great idea outside the summer months but surely a refreshing respite from the searing summer heat. Be aware though that swimming here, though popular in season, is officially not advised (it is not banned) due to hidden rocks, etc in the water and potentially slippery rocks so exercise care if you do go for a swim.

Fishing is permitted in the freshwater pools and the river. Who knows? You may go home with a nice Rainbow Trout, Golden Perch, Murray Cod or a Silver Perch or two, if the signage is to be believed. Just remember that while the Australian Capital Territory Government manages the reserve, New South Wales’ (NSW) fishing laws apply so you need a NSW fishing licence and must comply with posted bag limits.

This short walk is accessed from the far end of the small car park at the Googong Pump Station, in the northern section of the Googong Foreshores reserve. The reserve (northern) gates open at 8.00am and are locked again at 6.00pm in non-daylight savings time and at 8.00pm in daylight savings time. The carpark is about 30kms or 30 minutes drive from Canberra city centre.

A short distance from the car park I came across an intersection at which I presume a sign will be erected when work on the paths currently underway is completed.

First up, I veered right to a lookout which gave me a brilliant view up to the Dam wall.

You cannot access the river from this point so having enjoyed the view I returned and followed the lower track to a second lookout for wonderful views, as depicted below, across the cascades (though the water level was low when I visited), up towards the dam wall, as well as down along the river. Access to the river and rock pools is via a short though steep path from this lookout. There is a fence stopping you from going right up to the dam wall!

Overall this is an easy walk, accepting that there are steps and the path is a little rocky in part. There is even a picnic table, by the looks of it rarely used – why I am not sure as it has a nice view, high above the gorge before you reach the intersection depicted above.

If you do the Black Wallaby Loop Track walk which, in part, takes you along the other bank of the river you can get equally good views into the gorge and views across to the lookouts on this walk. I did that walk earlier in the day and the photo below hopefully whets your appetite to do likewise.

My next Queanbeyan review– HERE

Return to the beginning of my Queanbeyan reviews – HERE