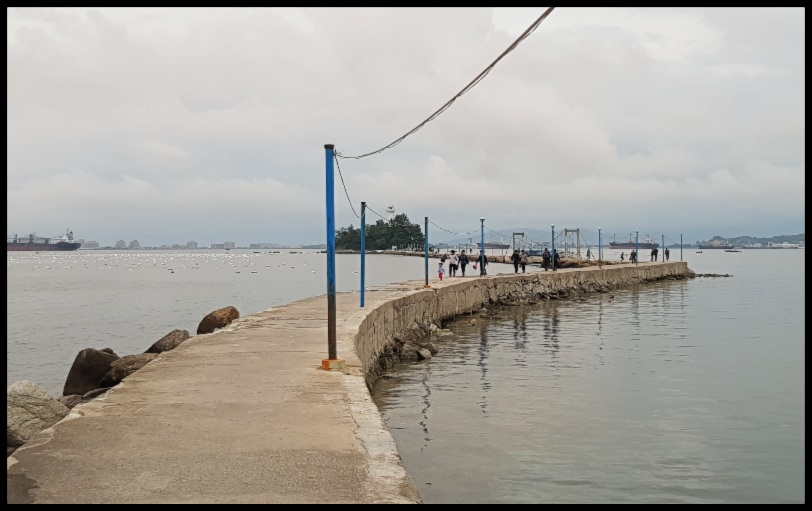 Wonsan has been an important port since it was established in around 1880, primarily for trade with Japan. In 1919, during their occupation of the Korean Peninsula, the Japanese further developed the port and built a causeway/breakwater out to Jangdok Islet on which they built a lighthouse – for the protection of the harbour and shipping, mainly their own.

The causeway and the lighthouse, which was rebuilt in 2009, still protect the harbour and shipping today and additionally provide a pleasant escape from the city for tourists and locals alike, although more so for locals.

While our hotel, the Dongmyong, was at the entry point to the causeway we were only permitted onto it and out to the islet in the presence of our guides. We were offered two opportunities to enjoy the walk – one at sunset and one in the early morning. A couple in the group went both times. I settled for the sunset option though sadly it was too cloudy for a decent sunset.

Entry to the causeway was, as I recall, about one Euro. While many countries around the world will accept certain foreign currency notes, North Korea is the only country I know that readily accepts certain foreign coins.

The walk to the islet is about 1.2 kilometres each way and, at a nice leisurely pace, took us about an hour and a half, return.

The causeway, and to a lesser extent the small rocky islet, is a popular spot with locals who come to fish, drink and enjoy BBQs and other foods – with a focus on freshly caught fish which was readily available for purchase, a sign that private enterprise is alive and kicking in North Korea, if still some what from being the predominate driver in the economy.

In addition to watching the locals fish and otherwise enjoy themselves the walk affords great views of the Wonsan skyline and of the Mangyongbong 92 ferry, docked by the quayside. The ferry, like its predecessor, was used to ferry goods and cargo between North Korea and Japan until 2006 when Japan, as part of international sanctions against North Korea, banned North Korean vessels entering Japan.

Moving on towards the islet and lighthouse we came across many small scale fishermen and women preparing their boats and nets for later trips to sea.

The Changdokdo Lighthouse, to give it is proper name, is one of many lighthouses aiding seafarers along the country’s coasts but, apart from the frequently visited one on Pi Island at the West Sea Barrage, is the only one which foreign tourists can visit. I don’t think this is due to a specific ban on foreigners visiting lighthouses but rather because none of the others are within easy reach of authorised tourist sites.

Lest foreigners have a particular interest in North Korean lighthouses the country has produced postage stamps featuring many of them.

From the lighthouse we had a good view back along the causeway.

Returning to the hotel, by which stage it was getting dark, bbqs were underway.

While I did not walk out again to the islet the following morning my friend did and he shared this final photograph with me, one I especially like. I feel it is very worthy of sharing here (with his permission).

This is my last North Korea – Wonsan 2018 review