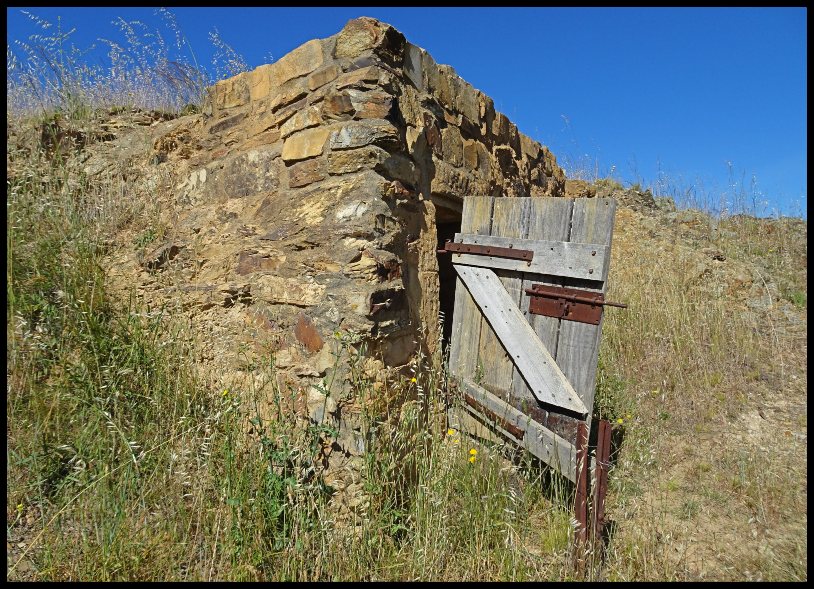 The Towrang Stockade and the Great South Road

When Messers Hume and Meehan visited the Goulburn area, the first Europeans to properly explore the area and see its potential, in 1818 they certainly did not do the trip from Sydney in two hours, along to-day’s multi-lane Hume Highway which connects Sydney to Melbourne via Goulburn. Rather, they would have travelled across country on horseback and on foot, if lucky along Aboriginal tracks. The 200kms trip would have taken many days, if not weeks, through a heavily, and almost impenetrable, forested area covered with Bargo brush.

The following year in 1819, presumably based on feedback from Hume and Meehan, New South Wales’ Governor, Macquarie, ordered the construction of the Great South Road from Picton to the Goulburn Plains. Picton was (and indeed still is!) about 90 kilometres west of where Captain Arthur Phillip had landed with the First Fleet in 1788 and was then the furthest extremity of the New South Wales road network.

In 1820 Macquarie visited the Goulburn area and found:

‘a noble, extensive, rich meadow near a fine large pond of fresh water, the cattle being up to their bellies in as fine, long sweet grass as I have seen anywhere’.

Of course the Great South Road would not have been completed by the time of Macquarie’s visit and it took some years before a very basic road was completed.

The original Great South Road was rebuilt and re-routed based on plans drawn up by the Surveyor-General, Thomas Mitchell, in 1833. To-day Mitchell’s work on the Great South Road is best preserved at Towrang Creek (10 kilometres north of Goulburn), where his stone arch bridge and a number of culverts can still be seen although they no longer form part of to-days  Hume Highway, Australia’s present day Great South Road.

Naturally the construction of Mitchell’s road was a mammoth task needing a large number of workers for what was then a very manual and arduous task. It will probably come as no surprise to my reader that many hundreds, if not thousands, of convicts transported from the Motherland, especially those who were deemed least capable of reform or improvement, would find themselves road builders in one of Britain’s furthest flung colonies.

So that work could be carried out efficiently and cheaply (i.e. workers could walk to and from their work daily) the planned route was divided into sections and stockades (essentially penal camps) were established in each section to house the convict workers, their military guards and supervisors and to store materials. The Towrang Stockade, which housed convicts between around 1836 to 1843, was one of the largest and is the only one from which remnants remain to this day.

Due the Hume Highway running between the location of the former stockade and the remnants of Mitchell’s Great South Road it is necessary (for safety reasons) to visit both sides separately, not a difficult task. 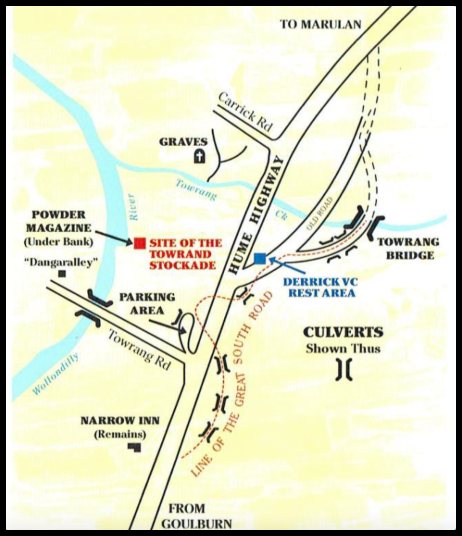 Assuming you visit from Goulburn, it is logical to visit the stockade side of the Highway first but you need to be aware that its location is unmarked and when you do find it you will be confronted with a sign advising that you enter at your own risk. The stockade is on private property but with access permitted for those with a genuine interest.

Just one word of caution, as the grass is often not cut you do need to watch out for snakes, particularly in the summer months.

The parking area for the stockade is immediately after the Towrang Road turn-off on the Hume Highway. Having parked, walk in a northerly direction along the fence-line and you will see the gate pictured below.

Located on this side of the highway are vestiges of former stockade buildings, a powder magazine and a small graveyard. While the stockade almost certainly included stables, a blacksmiths and possibly a bakery no evidence of their existence remains. Below is local artist Ken Kenchington’s impression of what the stockade may have looked like in the late 1830s. 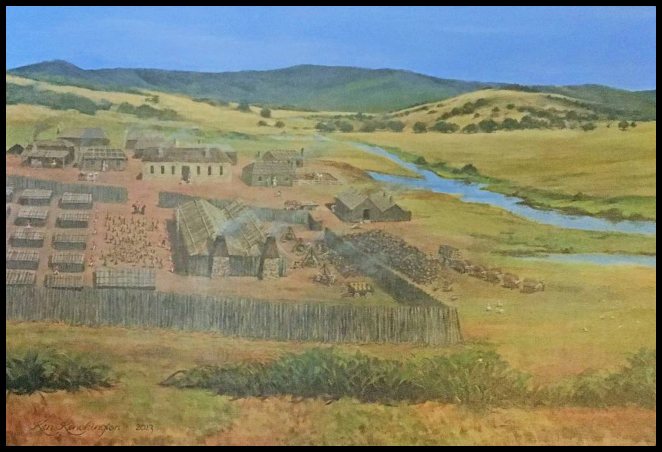 Traversing the paddock (field) the first area encountered was used as quarters for soldiers and convicts. Apart from some rubble, thought to be from the more sturdy soldiers quarters, little remains of these buildings.

It is thought that in excess of 250 convicts were housed in this area.

“there were hardly ever less than two hundred and fifty prisoners at Towrang – men of all degrees of crime, truly a motley group of criminals; not a few of whom has been ‘sent out’ for…….. first offences”

When soldiers and others were added this would have been quite an impressive compound.

The convicts were classified into two categories with the first category being the ‘light sentence’ ones who were engaged in tasks such as looking after officers’ horses and quarters and driving stockade bullock teams.  The second category – the ‘Iron Gang’ – comprising those with sentences of over 14 years and life did all the heavy roadwork, in chains, and under the guard of armed soldiers. Members of the Iron Gang typically worked from day-break to five in the afternoon.

Both categories of  convict survived on meagre rations (‘a supper of salt, junk, damper and ‘post and rails’ tea), and slept on a bare board with a single blanket, ten to a ‘convict box’ or cell of about twelve feet square. Running through these temporary and movable boxes was a central chain which was passed through the leg irons of  Iron Gang convicts to secure them at night.

In addition to harsh living conditions for those who complied with the rules, rigid discipline was enforced and floggings were routinely administered for even the most trivial of offences such as smoking or talking to passers-by on the road. Typically 20-50 lashes would have been given for trivial transgressions while more serious ones like attempting to escape earned the malefactor 100 lashes. Such was the need for punishment that two floggers, chief flogger Billy O’Rouke (who ‘revelled in his work’) and Black Frances (an ex-convict) were on the payroll. In an address to the Goulburn Historical Society in 1951 a Mr SH Hume referring to Black Frances described him thus:

‘Negro, flogger and pimp, he was a most unlovely character’.

Partly excavated into the hillside above the Wollondilly River is the powder magazine.

Also, see my main picture at the top of this entry.

The magazine was used to securely store blasting powder used on the road cuttings and for splitting building stones. Secure storage was required not only to stop convict ‘misuse’ but also to prevent passing bushrangers adding it to their arsenals. The entrance and upper part of the magazine entrance passage were restored in 1975 but the remaining underground section, which you can enter, is in its original condition.

Moving eastwards and just across the generally dry Towrang Creek,  the stockade graveyard can be found. According to records both soldiers/their family members and convicts (estimated at up to eighteen in unmarked graves) were buried in this area though today there are only three headstones remaining.

The inscription on one of these headstones, that of soldier Pte John Moxey, poignantly includes a timely reminder for the living:

The headstone of Mary Brown, a four year old child, describes her as ‘a dish’. Contrary to what the term means to-day, in the 19th century it was slang for ‘a perfect child’. 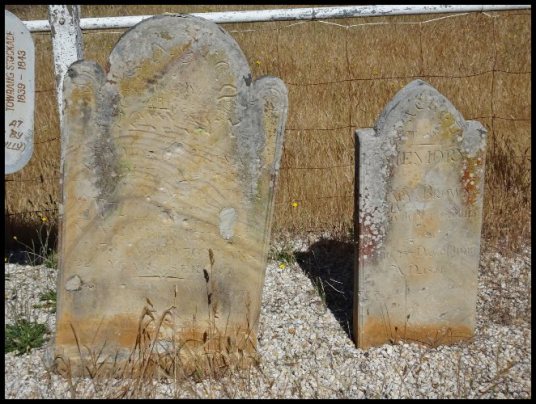 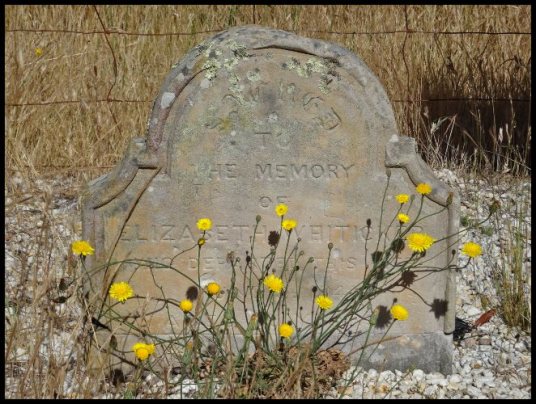 Having viewed the graves I returned to my car and, heading in the direction of Sydney, crossed the Highway at the next crossover ( Carrick Road) and entered the Derrick VC Rest Area. The rest area is one of many along the Highway dedicated to Australian Victoria Cross winners, this one honouring Sergeant Thomas Derrick for his heroic exploits at Sattelberg, New Guinea during World War II.

In addition to its proximity to remnants of the Great South Road the rest area is a pleasant shaded stop with tables, benches and facilities for travellers seeking a rest, a pee or a place for a bite to eat along their way. While I understand that overnight camping is not officially permitted here there were a few parties doing just that when I dropped in.

Anyway, as I did not stop there to rest, pee, eat or camp I just parked my car and located the information board on the Towrang Stockade. From here I followed a short walking track to the Towrang Bridge, fording the dry Towrang Creek.

This sturdy bridge, possibly designed by colonial bridge designer David Lennox, was built in 1839. It is a beautiful piece of stone masonry constructed by convicts from the stockade using dressed sandstone. It and six surviving  high quality culverts in the vicinity formed part of Mitchell’s Great South Road, the vast majority of which has long disappeared.

While I have referred to quality work on the bridge and culverts it does need to be pointed out that the Great South Road was still by 1858 described as ‘a scarcely formed bullock track with its tottering bridges, rugged steeps and treacherous passes’. It was also greatly favoured by bushrangers who sought to supplement their income at the expense of passing travellers. On both accounts there was great rejoicing in Goulburn when the railway line to Sydney opened in 1869.

10 thoughts on “The Towrang Stockade and the Great South Road”