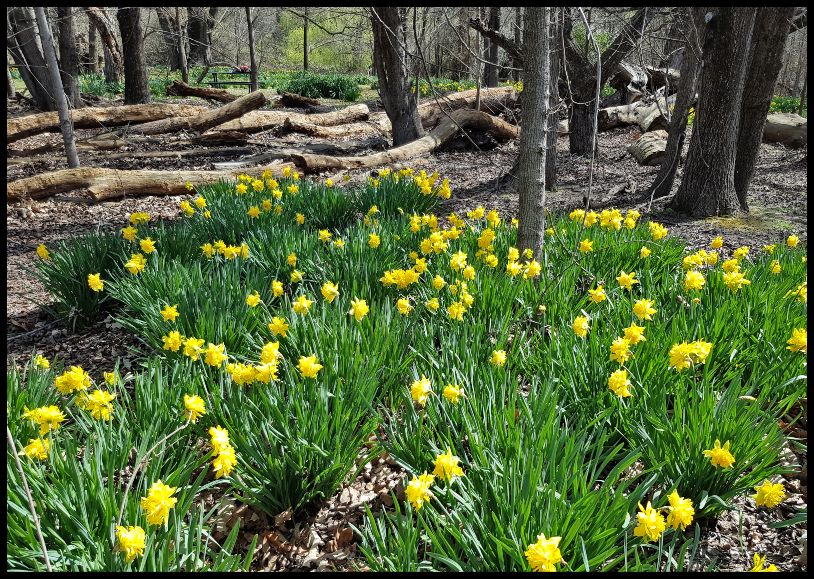 There are three official walking tracks to the former Sherwood Homestead, about 35 kilometres drive from Canberra. I have written separate reviews on the other two – from Blue Range Hut (the most popular approach) and from East-West Road (the easiest). This review covers the walk from Mountain Creek Road but as I could not resist the temptation to take in two peaks in the vicinity of the former homestead the 8.4 kilometres official walk increased to 11 kilometres and became somewhat more difficult, on the huffing and puffing scale.

My walk started from a small parking area at a Parks entry to Sherwood Forest. This is located on the left hand side, about 1.5 kilometres drive along Mountain Creek Road, from its intersection with the Uriarra Road. While the Mountain Creek Road is gravel it is easily accessible by two wheel drive vehicles.

Leaving the parking area, to my left I had a beautiful view, across a small man-made drinking dam for cattle / sheep and green pastures towards Mt McDonald. Mt McDonald, which overlooks the Cotter Dam, is accessible, on foot, as an extension to the Cotter Catchment Lookout Track walk.

After admiring some early spring flowers I moved on along the gravel management track which slowly ascended though fairly open but increasingly scrubby terrain between Mt Dowling on the left and other hills in Sherwood Forest on the right. From the track I also had good views backwards towards the Murrumbidgee River and valley.

Very soon I was among eucalypts. On the way back out I was reminded that summer was on its way when at 20 degrees Celsius I could faintly sense that very distinctive eucalyptus smell which on the one hand I love but which on the other hand I have grown to fear as it reminds me of how combustible these trees are in hot weather. The smell always brings back memories of the devastating Canberra bushfires of 2003 and of fires Australia wide in the 2019/20 summer.

After about 20 minutes, and having gained about 100 metres elevation in 1.5 kilometres, I arrived at the pine plantation which dominates the Sherwood Forest. These pines were planted at some time after 2003 when a major bushfire ripped through this area destroying everything in its path. In addition to being a source of timber, the pines also help combat erosion and thus improve the quality of water flowing into the Cotter Dam, one of Canberra’s main water sources.

About 100 metres after entering the pine plantation I came to an intersection  at which point I veered right (I seem to recall there was route marker recommending this) taking me deeper into the pine plantation, along an undulating though relatively easy going management track.

Had I turned left at the intersection and headed downwards along and unplanted corridor containing rather ugly electricity pylons and wires I would have come out near the former Sherwood Homestead too. If I had not returned via Mt Dowling I would have come back this way to complete the official circular walk (see the pink link on the route map above).

I continued for about 1.8 kilometres, with very limited views, until I reached another intersection. Here, if I had been going directly to the former homestead I would have followed the direction marker and veered left. Having decided to climb Two Sticks Hill, the hill I had seen a number of times previously as I approached the former homestead from the other direction, I veered right and very soon reached a locked gate taking me out of the Sherwood Forest.

After climbing across the gate I took a sharp right turn and continued uphill for another 500 metres at which point I walked around a corner and nearly fainted!

I exaggerate slightly but on walking around the corner I was confronted with a hill of about 300 metres in length with an elevation gain of 80 metres – an approximately 30%, on average, incline with short sections somewhat steeper.

That old dogged accounting spirit kicked in and on I went. While a hard slog I took it slowly up the hill and in so doing, about half way up, crossed the (unmarked) border from the Australian Capital Territory into New South Wales.  Though impossible to photograph well, the views back towards the Cotter Dam/Reserve made up for the effort required as did the view across into New South Wales when I reached the saddle, the high point on the management track where I would turn south and head into the bush towards Two Sticks Hill peak.

From here to the unmarked Two Sticks Hill peak it was about 500 metres and while there was a very indistinct path I decided, in the main, to remain on the ridge line from the saddle and thus had to do a bit of rock hopping along the way. The peak was back in the Australian Capital Territory and less than ten metres higher than the point at which I left the management track. I knew I had arrived at my destination when I started loosing altitude!

It is important to be aware that there is absolutely no view from the peak and that views anywhere, having left the management track, are next to zero. What you do get to see are the remains of an old stone wall, a few old wooden posts and a bit of old fencing wire.  Given this, and that hill on the way up, one could be forgiven for deciding not to come up here but I had plenty of time on my hands and I do have an interest in obscure things like old walls and fence lines so, why not?

Initially I thought the wall, which runs for around 200 metres, may have marked the ACT- NSW border but given the direction it runs in I concluded that could not be the case. Later research confirmed this so I can only assume that it was just an old, and obviously now unused, fence line.

Having dined without a view I retraced my steps to the management track and gingerly back down the steep hill, taking care not to slip.

On returning to the intersection with the Sherwood Homestead track I turned right and made my way downhill, passing by the pine plantation on my left and euculypts on my right, for another kilometre until I arrived at the former homestead, marked by the sound of the gurgling creek passing by and a wonderful display of springtime daffodils which has appeared here each year since the 1860s, notwithstanding that no one has lived here for around 100 years.

After chatting with a few other walkers (who, very oddly, didn’t share my interest in the remnants of old stone walls and decrepit fences and hadn’t climbed Two Sticks Hill!) and having enjoyed the daffodils for about half an hour it was time to make tracks. Knowing that my next target was the top of the hill, part way up Mt Dowling, depicted below it would have been tempting to head straight for it from the spot I took this picture, at the former homestead site.

Thankfully I had read up a little in advance and knew that a creek (the least of my worries) would have to traversed as would a high barbed wire fence and an abundance of thorny blackberry bushes, if I took the direct approach. Accordingly, I decided to stick to the slightly longer management tracks, as I suggest you do should you do this walk.

After about a kilometre and shortly after crossing the creek referred to above, and just past a power pylon I decided to take a fairly steep 250 metres shortcut to my right, up along a fence line to join the management track that would take me to the top of Mt Dowling.

Had I stuck to the management track I was on (and thus the official walk omitting Mt Dowling) it would have lead me back to the intersection with the track I came in on earlier in the morning, near the entrance to the pine plantation, coming from Mountain Creek Road.

On the shortcut, as I neared the management track to Mt Dowling I came upon a barbed wire fence that on closer inspection I found to be electrified. Somewhat disillusioned and knowing I could not cross the fence I decided to follow it in a northerly direction in the knowledge that in the worst case scenario I would get back to the management track and have to go the long way round, adding 1.6 kilometres to my walk. Thankfully, within 50 metres I found that the fence had fallen sufficiently to allow me to nervously step over it, without finding out for sure if there was a live current running through it.

Having connected with the management track the walk to the top of Mt Dowling was relatively easy, especially when compared to the hike up Two Sticks Hill, and afforded spectacular views in all directions. Well worth every step.

After a short stop at the top I decided on another shortcut, this time straight down to the management track I had taken in from the car park earlier in the day. As I had closely inspected this side of Mt Dowling on my way in I was fairly confident that there would be no fences to contend with along my planned route. Thankfully I was correct and I soon rejoined the management trail for the short walk back to the car park and the end of my walk.

Summary of walk options and distances

Hopefully I have not confused my reader to much with the walking options available in and around this part of the Sherwood Forest. If I have, perhaps this summery (used in conjunction with the map above) may make amends.

Walk to Sherwood Homestead via Two Sticks Hill and Mt Dowling (as I walked it – blue on the map, in an anti-clockwise direction ) – about 11km – walking time around 3.5 hrs. With breaks and not rushing it, I took 5 hrs to compete this walk.

This is my last CANBERRA – WESTON CREEK AND THE WESTERN ACT review. For other CANBERRA reviews click HERE.