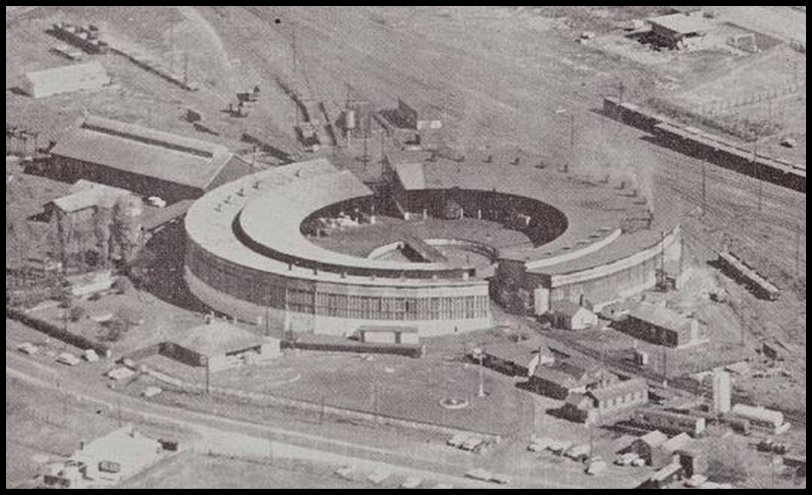 Based on a quick look at my main picture above you could be forgiven if you thought this review might be about a sports arena of some sort. What we actually see here is a Railway Roundhouse, in fact the largest one in New South Wales.

A roundhouse is a large storage and/or maintenance shed for trains and carriages. It is circular in form so that the locomotive, for example, enters into the centre of the circle and onto the giant turntable which is then rotated allowing it to move or be shunted off into the shed on one of the many roads (tracks), as they are called.

In this roundhouse there were 42 roads and thus storage/ maintenance bays available for use. From the more recent picture below you will notice that almost half the original sheds have been removed but you do get a good picture of how the engines, or mainly carriages here, have been moved from the central turntable into their allocated bay.

If you have read my review on Goulburn Railway Station you will recall that Goulburn was the first train station in New South Wales outside the Greater Sydney area and that the first train came here in 1869. As Goulburn was the end of the Southern Line a maintenance facility and more extensive yards were required. While the city had such facilities from the outset it wasn’t until 1918 that the 42 road roundhouse was completed with its 90ft (27 metre long) turntable. Actually the original turntable was a bit shorter and subsequently extended. By this time the Southern Line had been extended west into outback New South Wales and south to Melbourne, with a resultant significant increase in traffic to support and extended workshop/depot. The depot and roundhouse closed in 1986 though it was used for storage and refuelling for a few years after this.

Many of the locomotives and carriages on display are privately owned and stock changes as restorations are completed.

Also worthy a look (and included in tours) is the extensive workshop complete with a large wheel lathe, machine shop, sheet metal shop, and blacksmiths station, where restoration work is carried out.

The roundhouse can only be visited via a guided tour though tours are run on demand and only need one person. My guide, having worked in the roundhouse, as most guides have, had an intimate and detailed knowledge of the facility and was extremely personable and keen to share that knowledge.

I will finish with a few words of advice / caution:

The refurbishment and restoration of trains and rolling stock is a slow and labourious process, primarily due to a lack of money and skilled volunteers. Given this, it is sad that many visitors have commented, on social media, on the decrepit state of many of the locomotives and rolling stock on site and also on the lack of maintenance of buildings and the ‘unprofessional’ way the museum is run. Clearly they miss the point and would have been better not to have visited. Those with a genuine interest in railway history and the preservation of that history will absolutely love this place. For me, it is the number one attraction in Goulburn but I do have a particular love for all things trains.