Being a regular visitor to the Australian War Memorial museum in Canberra I am used to a focus on Australia’s contribution to various wars with Australian and ally artefacts and some war trophies being used to tell that story. While the Rocky Hill Memorial certainly covers Australia’s contribution the focus here is much more on the exhibition of war trophies (enemy objects captured and taken from the field of battle by the victor) – such that visitors, especially Australians ‘can see the tangible results of’ the valour of Australia’s armed services overseas.

During World War I (the focus of this museum though it also covers World War II), driven by the efforts of the Prime Minister and senior military officers, the Australian Imperial Forces (AIF) captured more war trophies per head of population than any other country. After battling with the Imperial War Museum in London, which had first dibs on trophies collected by the Allies, Australia got to choose what it wanted to bring home.

Goulburn did well in the initial distribution and its haul included two German Howitzer field guns. One of these was captured by the 45th Battalion at Villers Bretonneux and was used against the retreating Germans by the 110th Battery. The other, a 150 mm gun, was captured by the Ist Australian Light Horse Regiment in a skirmish near Mafrak in Palestine, in September 1917. Also included in the initial haul were two German Maxim machine guns.

Perseverance by the Town Clerk and others, backed up with commitments to display the trophies received, lead to many more items being received by Goulburn throughout the 1920s.

Initially arrangements were made to display the trophies at the Goulburn Technological Museum (long since closed). Space there proved insufficient and everything, plus some additional receipts, was moved to the crypt in the Rocky Hill Memorial Tower when it opened in 1927. The museum remained in the Memorial Tower until 1999.

In 2000 the former caretaker’s cottage, just down from the Memorial, was re-purposed as a museum and everything was moved in there. Over the past 15 years or so I have visited this museum on a number of occasions and though a bit of a cramped rabbit warren, packed to the rafters, I have loved it and continue to do so. What I especially like is that everything is clearly labelled and for the majority of items the labelling includes an extended description or story related to the item on display. Clearly the whole place is a labour of love and a credit to all those involved.

In June 2020 an additional display space of 230m2 was added to the museum in the form of an ultra modern, purpose built building adjacent to the existing museum. I visited this in early July 2020 and remain ‘a little out’ on whether I like its exterior or not but am willing to give it some time to settle into the environment. The intent behind the design is admirable.

Ashley Dennis, from the design consultants, said of the design:

“We have incorporated mirrored cladding elements to reflect the surrounding landscape whilst signifying the precinct as a place of reflection, while the textured concrete structure is a contemporary interpretation of the memorial tower.”

‘Native grass plantings on the roof mimic the surrounding rugged landscape and help to blend the new building into the rocky escarpment, particularly when viewed from the memorial tower above.’

Internally, I really like the new area as it is spacious and well laid out and thankfully the trait of excellent labelling has continued into this area.

Notwithstanding the additional space the now ‘old area’ remains a cluttered rabbit warren and I write this as a compliment and have the sneaky suspicion (perhaps hope) that the new area will become more cluttered, in the not to distant future, than is the fashion in most museums today. I for one will not be complaining though understand that with increased visitor numbers increased space is required!

Given the large volume and range of exhibits it would be impossible for me to go into detail on even a fraction of what is on display here. Rather than attempt to do so I will highlight just a few of the items I find particularly interesting, noting that I tend to focus on smaller items (covering World Wars I and II) with personal significance to individuals and the more quirky items rather than armaments and such like, though there are ample of those for anyone wishing to focus on that aspect of the museum. There really is something for everyone here.

A few of the exhibits which particularly appealed to me:

One of the most hideous developments of World War I was the use of chemical weapons, initially by Germany against the French near Ypres in April 1915. Soon both sides were using various forms of chemical weapons and gas masks became standard equipment.

As these weapons have a similar affect on animals as on humans it followed that gas masks had to be manufactured for the large number of horses in service on the front during World War I.

Depicted below is the museum’s late-war German horse respirator. These respirators were typically manufactured from austerity materials such as reclaimed cotton and paper as other higher quality material was in short supply. The accompanying photograph shows German artillery men leading their horses on the Western Front – donning this type of gas mask.

Although this particular sign was attributed to the German Army, given that it is in English, it is almost certainly of British or Commonwealth origin. While signage was a popular souvenir for soldiers very few WWI signs remain in a condition as good as this one making it a prized possession of the museum and an item of national significance.

This sign and its companion one directing stretcher borne cases to a different location were all too common along various fronts.

The accompanying photograph below, containing a similar sign, ‘depicts a YMCA stall at St Jean supplying hot drinks to walking wounded troops from the New Zealand Division of II Anzac Corps on the 5/10/1917, the day after they captured the village of Grafenstafel during the Battle of Broodseinde.’

Silk or cloth maps were carried to assist servicemen (in this case British) escape back to safety in the event of capture or their otherwise finding themselves behind enemy lines.

These maps had distinct advantages over paper maps in that the could be used without an accompanying rustle or crackling, they could be carefully hidden inside cloth uniforms (e.g. sewn into seams) reducing the likelihood of their being found during frisking or other inspections, they were less likely tear and they would not dissolve in water. Additionally, if necessary, the ‘maps’ could be used to patch clothes, filter water or as a bandage or sling in the event of injury.

A Good Luck Flag was a traditional gift given to Japanese servicemen deployed in military campaigns, in particular WWII. They were flags signed by family and friends and often contained short messages wishing the soldier victory, safety and good luck.

A little bit of lighter relief before I continue……. 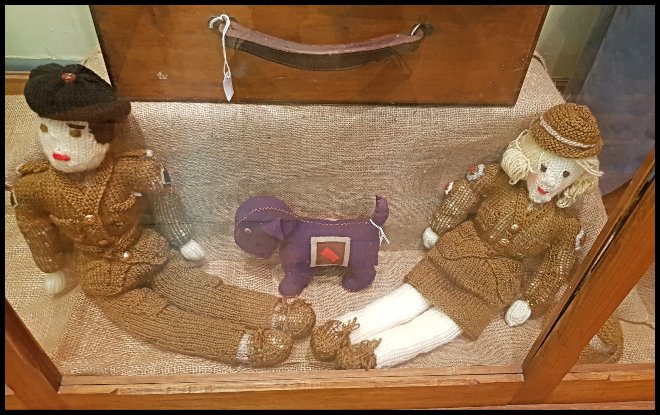 An article on the Australian War Memorial website reads:-

‘The name Changi is synonymous with the suffering of Australian prisoners of the Japanese during the Second World War. This is ironic, since for most of the war in the Pacific Changi was, in reality, one of the most benign of the Japanese prisoner-of-war camps; its privations were relatively minor compared to those of others, particularly those on the Burma–Thailand railway.’

Of course everything is relative and Changi was no holiday camp and was often a transit point for other more deadly camps in the region, in addition to being a hell-hole for some, depending on when they were there.

Apart from the main gate and a small portion of the perimeter wall nothing of the original WWII Changi Prison now remains, in situ, in Singapore. A small museum with some smaller artefacts, prison records and a replica of one of the chapels built by Allied prisoners is open to visitors near to the former prison site.

During a number of demolition phases Australia reached out to Singapore and managed to secure a number of artefacts from the old prison.

In 1988 one of the original prisoner-of-war chapels was secured and re-erected in the grounds of the Royal Military College, Canberra, were it was dedicated as the national memorial to Australian prisoners of war. See my separate review on the chapel HERE.

The Rocky Hill Memorial Museum managed to secure the original wooden cell door depicted below together with a number of smaller artefacts which are contained within the small ‘cell’, entered via the door within the museum.

This memorial plaque was issued after World War I and given to the next-of-kin of all British and Empire service personnel who were killed in, or died as a result of, the war.

Almost 1.4 million of these plaques were distributed. They became known as a Dead Man’s Penny as they were made from bronze and, though significantly larger, looked similar to the penny coin in usage at the time.

For me, the most touching exhibit in the museum.

While to lookout is open daily from 7am to 5 pm entry into the Memorial Tower and Museum is restricted to:-

10am – 4pm Monday, Wednesday, Friday
10am – 4pm Saturday and Sunday
Also open 10am – 4pm all school and public holidays.