Goulburn is a thriving regional Australian city in New South Wales’ Southern Tablelands, well situated on the main travel routes between Sydney, Canberra and Melbourne. It is about two hours drive from Sydney and an hour from Canberra.

Prior to European settlement the Goulburn area was a meeting place for a number of Aboriginal groups. The rough location of four meeting or ‘corroboree’ sites can be seen, from a distance, when you visit, as you must, the city’s excellent WWI memorial and museum on Rocky Hill which also affords excellent views across the city. The recently extended museum, adjacent to the memorial, focuses on WWI and WWII war trophies – enemy items captured during the respective wars.

While it is thought that John Wilson and his party were the first Europeans to see the Goulburn Plain in 1798 it is explorers Hume and Meehan that were the first to put it on the map and see its real potential in 1818. Meehan named the city, then a planned settlement, Goulburn after Henry Goulburn, Under-Secretary for War and the Colonies.

Settlers quickly followed the explorers, determined to capitalise on region’s agricultural potential. These early settlers included a significant number of British and Irish convicts, including at least one woman who arrived into Sydney in 1788, on the First Fleet. What particularly surprised me was the number of Jews who settled in Goulburn in the mid 1800s, again convicts from Britain. Equally surprising was how quickly they disappeared from the city in the 1880s, for reasons unknown. A great place to learn more about the early settlers is the city’s three old cemeteries – St Saviour’s, Mortis Street Pioneer Cemetery and the small Jewish Cemetery.

Wool production quickly became the region’s favoured industry, based on a demand from Britain. The first wool exports from Australia to Britain began in the 1820s, and the industry boomed throughout the 19th century and beyond. Despite setbacks such as drought, world war, and depression, wool continued its traditional dominance until the mid-20th century. Goulburn, like many parts of Australia, was well and truly ‘living off the sheep’s back’.

While other parts of Australia prospered much more from gold-rushes in the mid to late 19th century Goulburn’s main source of wealth, though there was a short-lived gold-rush in the region, continued to be agriculture.

All this money swilling around in the city lead to a massive building boom in the latter half of the 19th century. This manifested itself in private investment in grand hotels, coffee palaces (at the instigation of the Temperance Movement, to rid the city of some of its 74 drinking establishments), shops, residences and ornate office buildings.

Impressive though the private construction was it was only surpassed by the churches and local Government. Church investment resulted in two cathedrals (see below), numerous churches, schools and convents while major government buildings like a grand courthouse, railway station, waterworks, police station and the post office were constructed. 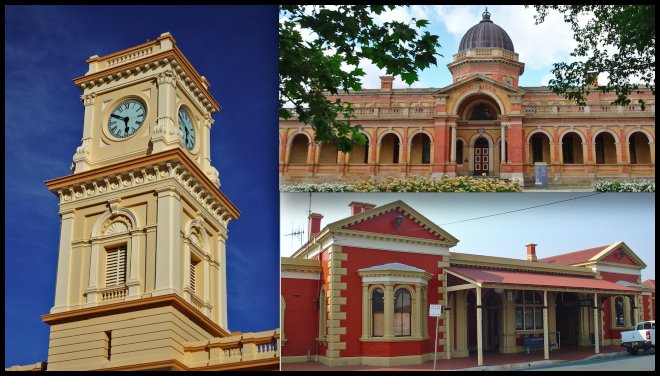 The city truly remains a treat for connoisseurs of Victorian and early Art-deco architecture. While a large number of these older buildings remain fully intact (including those pictured above, naturally!) don’t forget to look up to see some more attractive higher stories as you wander around the commercial streets in the city. Alas many older ground floor facades have given way to the more modern, commercially focused and downright ugly looks of the 20th century.

In 1863 Goulburn was declared, by Queen Victoria through the issue of a royal letters patent, Australia’s first inland city though it had a population of well less than 5,000. Today it still only has a population of around 24,000. It’s declaration as a city was based on the Anglican Church choosing the then town as the centre of a new diocese, covering most of the state of New South Wales, outside Sydney and Newcastle. St Saviour’s cathedral was duly built. A short time later the Roman Catholics also chose Goulburn as the centre of a substantial diocese and a second cathedral, Sts Peter and Paul’s, was built.

The arrival of the train into Goulburn in 1869, the first line in New South Wales outside Greater Sydney, put the city at a tremendous advantage. A visit to the Goulburn Rail Heritage Centre and the Railway Station provide a great insight into the development and role of the railway in Goulburn.

Many felt that the city would be doomed to the annals of history when the Hume Highway, connecting Sydney to Melbourne and Canberra bypassed it in the early 1990s. This turned out not the be the case and Goulburn remains a vibrant regional centre with sufficient to keep a visitor occupied for a few days, longer if they use it as a base to explore the local area. That said, too many people still visit the city (and often just the part abutting the highway) for an hour or so on their way to or from somewhere else.

Goulburn has a varied range of accommodation pitched to suit all tastes and pockets though the availability of low cost or free camping/ caravaning would entice many more longer term travellers who currently just spend a few hours here and move on. Living only an hour from Goulburn, apart from one night when I actually stayed here, I visit the city on day trips or en route to and from Sydney.

The city has a wide range of quality (and not so quality) eating options with a number of great coffee shops and other eateries in close vicinity to the beautiful Belmore Park, in the centre of the city, and along Auburn Street, in particular. And yes, Dear Reader, there is no problem finding a smashed avo (avocado) or a ‘Four N Twenty’ meat pie and tomato sauce if either is what you need or want.

But really, who could pass by this Asian restaurant on Auburn Street for some ‘Bellygood’ food?

And should you drop anything on your belly, fear not, take your soiled garment to the local laundry mat!

Those seeking some live entertainment of an evening should consider a show at the historic Lieder Theatre, noting that it only puts on a limited number of performances each year. The theatre is home to Australia’s oldest existing theatre company, the Lieder Theatre Company, which was established in 1891. The theatre itself was built in 1929.

An additional culture hit can be obtained by visiting either or both of the city’s small art galleries and for those seeking some reading material a visit to the Argyle Emporium is highly recommended. The Emporium is a massive second hand bookshop – certainly the largest I have seen in Australia and indeed anywhere!

For those who must shop (not me!) head for Auburn Street, Goulburn’s ‘Country Mile of Shopping’. This street is lined with a plethora of boutiques and speciality stores. While not quite Fifth Avenue or Bond Street there is certainly enough here to keep an interested shopper busy for an hour or two. More to my taste are markets and there are a few of these each weekend, in the City and surrounding villages, offering fresh local produce, arts and crafts and collectables.

Most people come by car – One hour from Canberra and around two from Sydney.

The only practical public transport option from either Canberra or Sydney is by train. There are sufficient services to make a day trip from either viable, assuming you are comfortable with an early start. Further details can be found at at http://www.nswtrainlink.info/

Hopefully this introduction to Goulburn has whetted your appetite sufficiently to stay with me as I explore, in more detail, the history and delights of Goulburn, including many things not mentioned here, in the series of reviews to follow.

My next Goulburn Review – HERE

22 thoughts on “Goulburn – Chilled Out Country Living, With City Benefits”