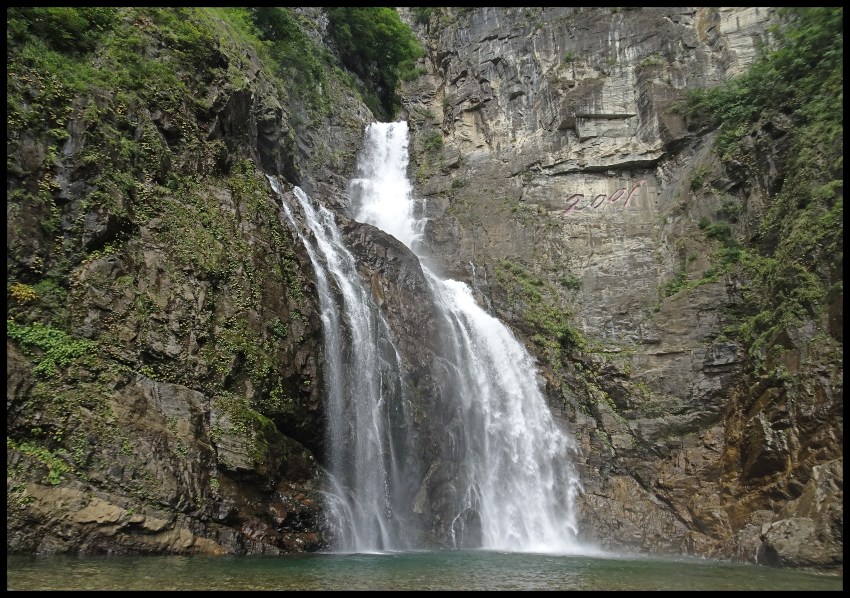 Overland from Pyongyang to Hamhung via the Ullim Falls

With the military and other celebrations to mark the 70th anniversary of North Korea’s foundation, on the 9th of September, over it was time for us to head east for the first of two forays which would let us see a large part of this, much less frequently visited and scenically beautiful, side of the country. For this trip we started with a bus ride, 300 kms across the country giving us a wonderful introduction to this beautiful scenery and an insight into country life more generally. This review is a photo journal of my trip from Pyongyang to Hamhung, on the east coast of North Korea.

While the highway was paved (concrete) the whole way it was rough and rather ass numbing in parts – increasingly the latter as the hours passed. We had transferred from our larger luxurious coach, with two seats per person, to two smaller and rather cramped smaller buses which we would need on subsequent days, in even more hilly terrain with much poorer roads.

The bumpy roads, the hilly terrain and a few stops (including one unscheduled one) en route meant that it took ten hours to travel the 300kms to Hamhung. Notwithstanding the welcome breaks en route everyone was rather relieved when we arrived into Hamhung a little before dusk.

As we left Pyongyang, all bright eyed and bushy tailed, we made a short stop at the Monument to the Three-Point Charter for National Reunification, more commonly referred to as the Reunification Arch or Monument. The arch sits on the main highway south which, had we continued there-on, would have taken us to the DMZ and the border with South Korea. The monument, about which you can read more HERE, expresses a hope that, one day soon, the Korean peninsula and people will once again be united as one.

Shortly after passing under the arch we took a left turn and headed east along the Pyongyang – Wonsan Highway, though not before getting clearance to do so.

While there are particular restrictions as to who can enter and reside in Pyongyang, people also cannot arbitrarily move around the country as they please so checkpoints are a common feature along all roads. Though tourists are not questioned, searched or otherwise interfered with, the identification of local people (i.e guides/drivers, etc) accompanying them is checked/ verified at these checkpoints. That said, the particular checkpoint pictured along side did seem a little different than the others (I wish I could read what it says on the top!) and may have been some form of highway/ traffic monitoring station as opposed to the more common military checks featuring, well, more military and road blocks. Photography at military checkpoints is, not surprisingly, prohibited.

Travelling east, initially the landscape was fairly flat with distant rolling hills all of a particularly pleasant, green pre-harvest hue, punctuated with the odd village here and there. 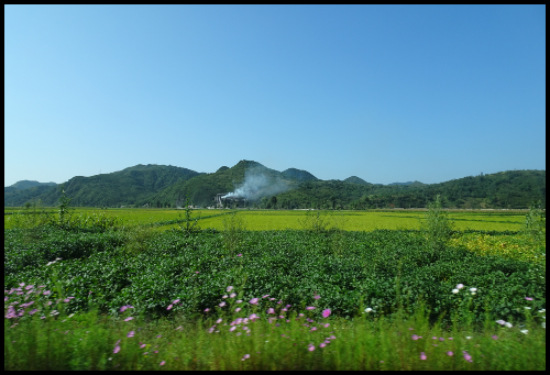 After a couple of hours and having moved into somewhat hillier country we drew to an unscheduled stop to let our overheated engine cool down – whoops, I mean admire the flowers. Ours was not the only vehicle stopped along the road such that travellers could  admire the flowers: Flower gazing seemed to be a particularly popular indulgence along this hilly section of the highway! 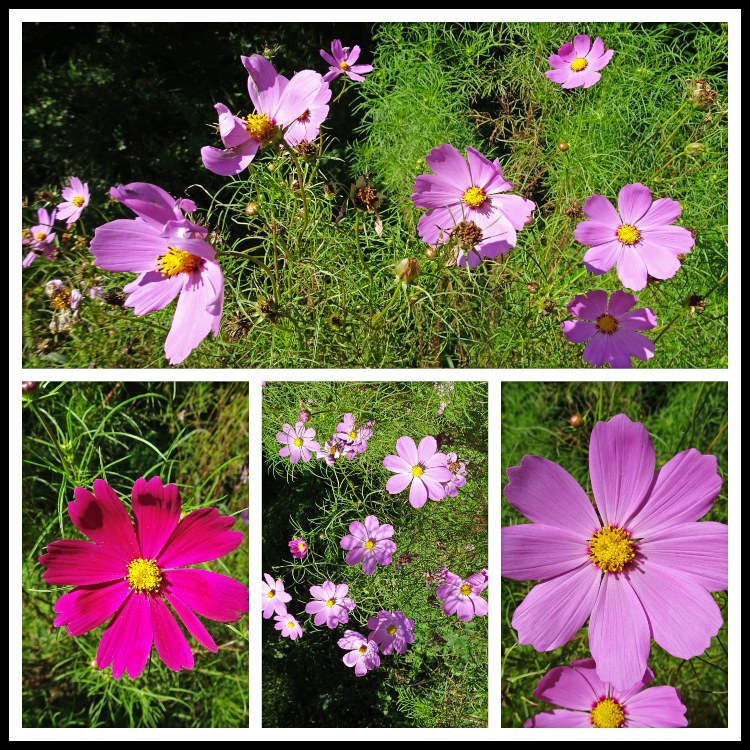 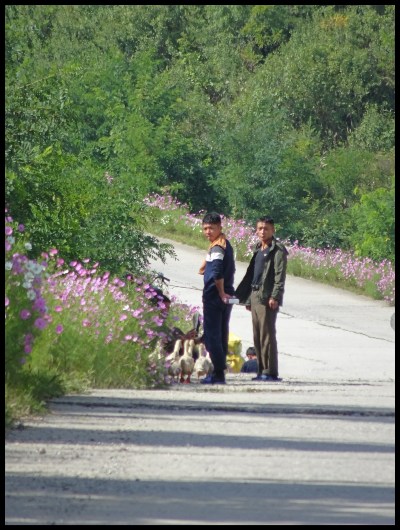 These flowers are found along roads and railway tracks throughout the country. Our guide informed us that the flowers are planted every year by loyal citizens as a summer-time treat and reward for Kim Jong-un as he travels around the country, working tirelessly for the people, as his father and grandfather did before him.

Outside thousands of roadside flowers the road was pretty deserted bar a few vehicles and highway workers/ cleaners here and there. This rather surprised my as I would have expected this to be a major supply route between the eastern industrial cities of Chongjin, Hamhung and Wonsan and Pyongyang. I can only assume that much of the freight would travel by train – slow and unpredictable though that process would be.

Soon it was time for our morning tea stop, at the beautiful Sinpyong Lake Resort.

In addition to stretching my legs and admiring the picturesque lake, I was able to get a cup of rather unimpressive coffee though I reckon it was probably better than the snake wine option also available.

While it didn’t look as if anyone one was staying at the resort it seemed that it was a regular stop for overseas, Chinese and local tourist buses and accordingly it was quite busy. By way of explanation, Chinese tourists are separately identified (counted) in North Korea and while only a few thousand non-Chinese overseas people visit North Korea annually hundreds of thousands of Chinese visit and that number is growing.

As we moved further east the hills and gorgeous scenery continued unabated.

Our final stop and where we would have a rather late lunch, about eight kilometres of the highway along a twisting road hewn into the mountainside, was Ullim Falls.

The falls, in this remote mountainous part of the country, were not discovered until the 1990s when soldiers stumbled across them. On hearing of the beauty of the falls, Kim Jong-il visited in 2001 and declared that the soldiers ‘had unfolded another fairyland in the Songun era.’ He decreed that soldier-builders should develop a resort and other tourist facilities here, as evidence of the Leader’s love for his people. Naturally, this was done though the observation building still looked somewhat unfinished in 2018.

To commemorate the Dear Leader’s visit the year of his visit ‘2001’, in a blown up copy of his handwriting, was engraved on the rocks to the right of the falls (visible in pictures below).

Kiosk at the Ullim Falls

Observation Building at the Ullim Falls

The falls have a total drop of 75m metres though this is split into two, approximately halfway down. When flowing somewhat stronger than when we visited the twin falls are said to make a thunderous echo sound, audible up to four kilometres away. This sound gave the waterfall its name,  ‘ Echo’ or ‘Ullim’ in Korean.

Having enjoyed the falls we moved downstream a hundred metres or so where we enjoyed a picnic lunch sitting by the river, soaking in the atmosphere and feeling the love that Kim Jong-il had for his people.

Our lunch box was courtesy of Air Koryo catering and included a famous (or is it infamous?) Air Koryo hamburger – in its 2014 livery! If you are not familiar with this delicacy do have a look at my review on Getting to North Korea by Air.

After our late lunch we continued on to the industrial east coast city of Hamhung (via Wonsan, on which I will write more in seperate reviews) arriving there a couple of hours later. Like everyone else I hoped that, after our ten hour bus trip, we would call it a day and head for our hotel. That was not to be. We still had a fertilizer factory to visit and visit it we did!