Nearly everywhere in the world it is courteous and common practice to bestow gifts upon leaders and dignitaries on official visits. Also, gifts are commonly given and received on important national days, birthdays and such like.

While the North Korean Leaders (here I mean Kim Il-sung, Kim Jong-il, Kim Jong-un and, oddly perhaps, Kim Jong-suk (wife of Kim Il-sung and mother to Kim Jong-il)) have travelled very little outside of North Korea and few leaders or high officials visit them from overseas they have managed to amass ‘hundreds of thousands’ of gifts since 1945. These have come from all corners of the world as well as from within North Korea – where the Leaders have travelled somewhat more, dispensing their trademark on-the-spot guidance on this, that and everything.

Being cognisant of their roles in working for, and serving, the people they do not (we were told) retain any gifts received for personal use and they are not hidden away in storage. Rather they are put on display for the people to see and enjoy. Having seen many of the gifts I too would not want them cluttering up my palace – if I had one!

Almost every visitor to North Korea will visit the International Friendship Exhibition in its two grand edifices built into the mountains at Mt Myohyang. Here you will be told there are three hundred thousand gifts, bestowed upon the Leaders by international admirers.

In 2012 the much less visited National Gifts Exhibition House, at the foot of Mt. Rongyak on the outskirts of Pyongyang, was opened to house gifts given to the Leaders by Koreans. This covers North Koreans, South Koreans and Koreans living overseas – in particular those in Japan who were living there in Japanese Colonial times (to 1945) and who chose to remain there after Kim Il-sung liberated the Korean Peninsula from Japanese rule.

The building was the brainchild of Kim Jong-il who offered it to the people as one of many gifts to honour the 100th birthday of his father, Kim Il-sung. Alas, for Kim Jong-il, he died some months before the building was opened so it was finished under the guidance of the current leader, Kim Jong-un. The building, like many others of the country’s museums and public buildings is finished in marble and polished granite and has a grand entrance hall sporting giant illuminated marble statues of Kim Il-sung and Kim Jong-il. This hall was the starting point of our visit and here we were required to pay our respects to the Leaders via a ritualistic bowing, from the waist.

As with the Mt Myohyang collection, photography within the building is strictly prohibited and access is via airport type security which misses nothing. Notwithstanding this ban I have been able to come up with a few photographs of the interior (from the Korean Central News Agency – KCNA) and of a couple of the best known gifts.

It is said that there are some 25,000 gifts in the four building with about 8,000 of them on display at any point in time, in the buildings 20 display rooms. Though we did not visit it, one floor is devoted to a library. While the gifts are similar to those in the International Friendship Exhibition – a large selection of pictures, pottery, petrified wood carvings, furniture, household goods, old Apple computers (the favoured brand of Kim Jong-il), a few vehicles and assorted bric a brac – the display holds much less interest for the average overseas visitor as they will not be familiar with the donors and will not get to see gifts from their own country unless they are South Korean, visiting on another passport.

Aside from a few South Korean presidents (including President Kim Dae-jung – who won a Nobel Peace Prize in 2000 for his Sunshine Policy on North Korea – and President Roh Moo-hyun) and corporations such as Hyundai I drew a complete blank in terms of donors.

As Kim Il-sung and Kim Jong-il remain the Eternal President and Eternal General Secretary of the Workers Party, respectively, gifts continue to flow in for both of them from both Korean and international admirers. I did, however, note a tendency for corporations and others seeking to do business with North Korea to now give gifts to Kim Jong-un – the actual living as opposed to the honoury living.

While all gifts are deemed important and have an important story to tell two in particular appealed to me (as they do to most people). I have been able to locate pictures of both.

Perhaps the best known exhibit (for all the wrong reasons) is a picture of Kim Jong-il, dressed in traditional Koryo dynasty battle attire, wearing glasses and riding a tiger on the sacred Mt Paektu.

Figuratively at least, tiger riding has long been associated with dictators and I have come across a book ‘Riding the Tiger: 100 years of Dictators’ featuring a caricature, by Barry Bruner, of Kim Jong-il riding a tiger with Hitler and Castro. 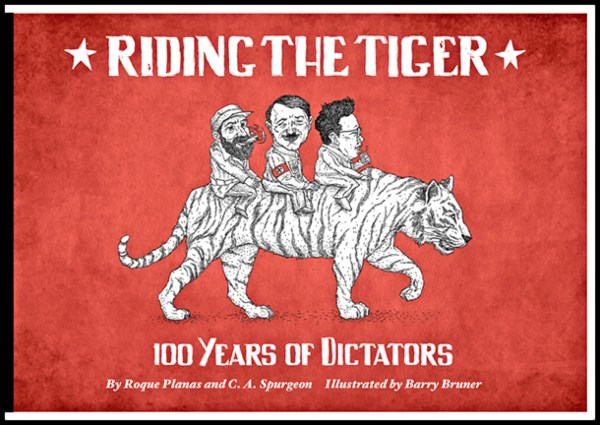 Additionally the book includes an interesting quotation by Winston Churchill:

“Dictators ride to and fro upon tigers which they dare not dismount. And the tigers are getting hungry.”

The Dokdo Islands (or Liancourt Rocks) in the East Sea (Sea of Japan) continue to be the centre of a diplomatic dispute between Japan and Korea that goes back more than 300 years. While South Korea maintain a presence on the remote islands Japan retains a claim over them.

Other somewhat peculiar gifts (though, each to their own) on display here included a cushion covered in seagull skin and feathers and stuffed with seagull feathers, a chair made totally from deer antlers and a marble tiger trampling on the United States.

While the stated purpose of the National Gifts Exhibition House is to display the gifts for the people to see and enjoy there were no ‘people’ there during our visit. In fact, when we arrived the building was locked up and the whole place appeared deserted, apart from a solitary soldier on guard.

We had to wait, in our bus (it was lashing rain outside), for over half an hour until security guards and staff arrived and readied the building such that we could be admitted. When we were finished our tour the lights were extinguished, the building was locked up and we gave the security guards and staff a lift back to the local village, from which they hailed. To be fair, we were there on a Monday morning and ‘the people’ may all have been working. Perhaps they visit on a weekend or on public holidays.

After our visit we returned to the city and the Potonggang BBQ Restaurant – a rather unprepossessing establishment serving what I feel was the best Korean bbq food we had on our trip.

The hearty lunch was most welcome and set us up well for our afternoon trip to Nampo via the Taean ‘Friendship’ Glass Factory.