Lunch, Revolutionary Dessert and a flight from Orang Airport

Our hearts and minds filled with the revolutionary spirit of Kim Jong-suk, it was time to eat before we started out for the airport to catch our charter flight back to Pyongyang. The Kyongsong Hotel, where we would dine, was only a short drive from the Jipsam Revolutionary Site, which half our group, including me, had just visited.

At the rather beautiful ivy clad hotel we were re-joined by the remainder of our group which had chosen to forgo tales of revolution for a hot spa.

Lunch was soon served in the rather colourful dining room, adorned by rather fetching curtains, if that’s your style, and a very agreeable painting of a rough East Sea (Sea of Japan) crashing against the cliffs of the dramatic Mt Chiblo range, somewhere apparently never visited by Kim Il-sung. We visited Mt Chiblo, not far from Kyongsong, a few days before.

Being close to the sea the restaurant specialises in seafood which featured heavily in our enjoyable luncheon spread. 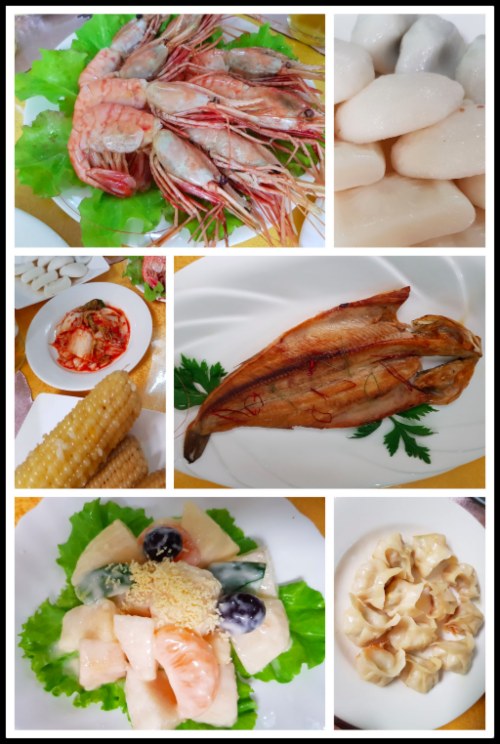 After lunch our waitresses, though as shy and reserved as any in North Korea, seemed keen that we should have a photograph of them so I obliged.

After this we set out for Orang (Chongjin) Airport via the scenic coastal route – no photographs permitted – so that we could make a brief stop at the Yombunjin Revolutionary Site, perhaps to instil some revolutionary spirit into those of our group who has missed out on the Jipsam site visit.

Like its Jipsam counterpart the Yombunjin site is along the rugged coastline but it is much smaller and, as far as I can ascertain, was not actually visited by any of the ‘Three Commanders of Mt Paekdu’ (Kim Il-sung, Kim Jong-il and Kim Jong-suk – lest you may not have guessed) prior to their liberation of Korea from the yoke of Japanese imperialism in 1945.

Post liberation, on 25 September 1947, the triumphant ‘Three Commanders of Mt Paekdu’ visited the nearby village (out of bounds for mere tourists) where Kim Il-sung dispensed on the spot guidance to fishermen and did a spot of fishing himself. If you have read my Jipsam Revolutionary Site review you will recall that the original plan was that Kim Il-sung would give on the spot guidance to fishermen there but he determined that that was not necessary due to exemplary guidance already provided in that village by Kim Jong-suk. Accordingly, he chose to dispense his words of wisdom here instead.

Afterwards he took a boat out to the rocky islet, which we accessed today by a subsequently installed rope bridge, where he posed for photographs. While the President was doing this the young Kim Jong-il climbed the nearby Kyesung Peak.

Looking at the image immediately above, the fishing village where Kim Il-sung gave his ‘on the spot guidance’ is just around the first headland and can be accessed via the tunnel depicted. Our bus was parked up on the hillside, above the tunnel, and we had to walk down a series of steps – and then back up them!

Site inspected, it was time to finally head to Orang Airport for our flight. Outside a picture of the exterior of the departure building, for which special permission was given, and inside the departure lounge which may not have been permitted (accidents happen!) photography from the point we left Yombunjin, about 10kms from the airport, until our flight approach into Pyongyang was strictly forbidden as Orang is primarily a military airport, run by the Korean People’s Army.

The airport building used by civilians is essentially a departure facility only. When we flew in a few days earlier we took a bus from the plane to the outside of this building where our luggage was delivered directly from the plane. Having picked up our bags we immediately boarded our bus and left the airport.

When we arrived to depart another group had just beaten us to it so we had to wait outside the building – no wandering off permitted – for about an hour while that group was processed. When we were finally admitted there was one check-in desk where we were matched to our passports which had obviously been brought across from Pyongyang for this purpose, weighed and asked to move into the salubrious departure lounge. It is worth mentioning that when we arrived into North Korea our passports had to be handed over to our guides for ‘safekeeping and to finalise our departure arrangements’ – as per standard practice.

Within the departure lounge there was a small shop and tea and coffee (instant) were available which we could enjoy seated on one of the rather quaint 1980s style green lounge chairs nicely lined up so that we could see, well nothing really, apart from the shop on the other side of the lounge.

Outside the lounge, actually back in the adjoining check-in area, there were rudimentary bathroom facilities.

When our flight was called we made our way to the nearby plane. I honestly cannot recall if we took a bus part of the way or not but I know we walked the last couple of hundred metres and were watched like hawks lest anyone accidentally or otherwise take any photos.

From a civilian aircraft perspective, we got to see Air Koryo’s very rarely seen Tupolev Tu-154B (P-552) departing, for Pyongyang, with the earlier group. We had actually seen it, a little further away, when we were waiting to enter the airport when one of my fellow travellers became very excited and was terribly disappointed when his requests to take a photograph of it or be allowed to transfer onto it for his return to Pyongyang were denied. Subsequently a photograph of the plane on the ground at Orang did appear!

Our pleasant and uneventful flight was on another Russian plane, the smaller twin turbo-prop Antonov An-24RV (P-532 – for any plane spotters that might be reading!). I took the photograph (below) of this plane at Pyonygang Airport, where photography is permitted. The second, internal, photo was taken by a fellow traveller en route to Pyongyang, when the photography ban was lifted.

As I indicated earlier, Orang airport is a military airport and, not saying anything that those interested would not already know, I saw numerous military planes (either, or perhaps both, ageing Russian MiGs or locally produced fighters together with various bunkers lining the main runway as we took-off (and previously when we landed). An early version of the MiG was one of the main combat aircraft used by the Chinese and North Koreans during the Korean War – 1950-1953. Anyone interested can have a look on Google Earth though perhaps to save you the effort I have attached a couple of Google screen shots here.

7 thoughts on “Lunch, Revolutionary Dessert and a flight from Orang Airport”