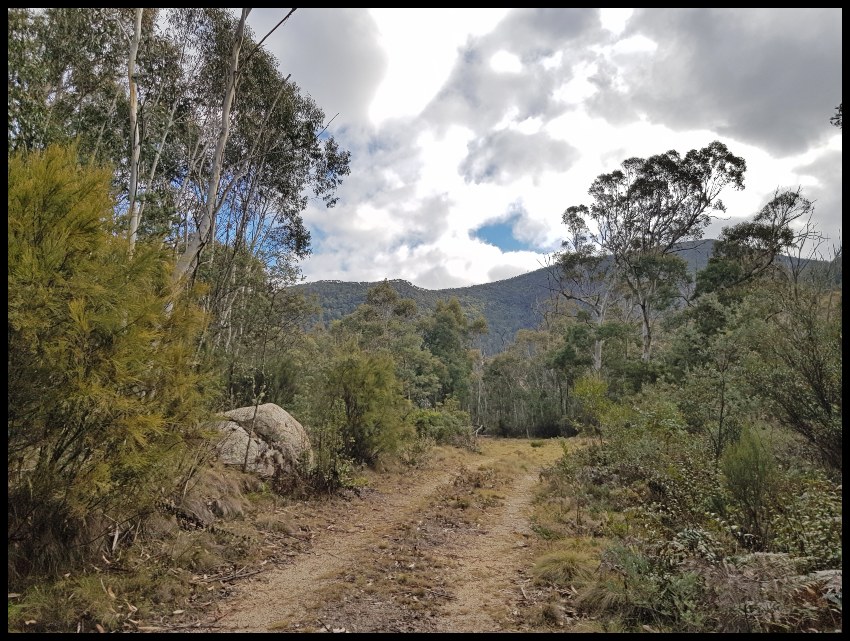 The Fishing Gap walk which, insofar as I can ascertain, has nothing whatever to do with fishing or fisherfolk is a moderate eight kms (return) walk within the Tidbinbilla Nature Reserve, just to the south of Canberra.

Inwards, the walk is all uphill with a reasonably gentle incline for the first three kilometres followed by a steeper section which you will certainly notice for the last kilometre. That said, it is still very much doable by anyone of moderate fitness, without undue pain, panting, moaning or groaning. Of course the return walk, via the same path is all downhill!

The ‘part of Mount Domain’ that I refer to in the title of this review was the first 1.2 kms of an unofficial trail which, if I had continued on for less than 2 kms more, would have taken me to the summit of Mt Domain at 1,506 metres altitude. For me this additional 1.2 kms turned an otherwise lacklustre walk into a much more enjoyable and interesting experience but I hasten to add that the extension will not be for everyone.

The walk to Fishing Gap took me one hour and ten minutes so a return trip just to it, with a short break, would have taken me around two and a half hours. Park literature suggests three hours and classifies the walk as hard (this classification – if not a little high – would only apply to the last kilometre). If coming from Canberra you will need to allow a return travel time of another two hours as the trail head is the furthest one away from the visitors centre, in the south west of the Reserve.

On leaving the small, though adequate, parking area (note there are no toilets or other facilities here or along the walk) the first thing I did, having crossed the road to the start of the walk, was to ‘sign in’ on the walk register. All walks that leave the valley area have a register.

It is critical that you sign in – and of course sign out on your return – especially if you are intending to walk beyond Fishing Gap towards Mount Domain and you are alone. You will thank yourself in the event that you do not return by the park closing time and you need to be rescued. While this is highly unlikely the Australian bush is deceiving and can be very unforgiving – particularly in the heat of summer or the cold of winter. Also, if going beyond Fishing Gap make sure you have a map, suitable footwear (i.e proper hiking boots with ankle support – your biggest risk is fracturing an ankle and being unable to walk) together with food and water. While a phone is useful for its gps / maps there are very few spots where you will be able to pick up a telephone signal.

If I had only been going to Fishing Gap, boots and other precautions such as maps would not have been necessary though I generally wear boots when hiking anyway, both for ankle support and as a protection against snake-bite (extremely unlikely if you stick to the paths/tracks) in the summer months.

The walk to Fishing Gap was along a fire trail, though thankfully one covered in leaves and other debris. This allowed me to get the feeling that I was actually on a bush walk as I made my way through the towering mountain gum trees with their vibrant green undergrowth and past fern gullies in this most peaceful and tranquil corner of the Reserve.

Walking through the gum trees

A fern gully along the way

Being winter there was not a lot of variety in the flora (outside gum trees and ferns) though I did come across some young Xanthorrhoea (commonly referred to as black boys), endemic to Australia, and a nice yellow flowered native which could be a variety of wattle or acacia or something completely different. If you know what it is please let me know and I will update my text.

Lurking among the Xanthorrhoea was a kangaroo, the only wildlife I saw today apart from a few camera shy birds. The various calls of birds was the only thing that broke the silence as I walked along.

On the early part of the walk there were only occasional views through the trees to nearby hills. While the shade along the walk would be very welcome during the summer it was not necessary on the winter’s day I chose to walk. 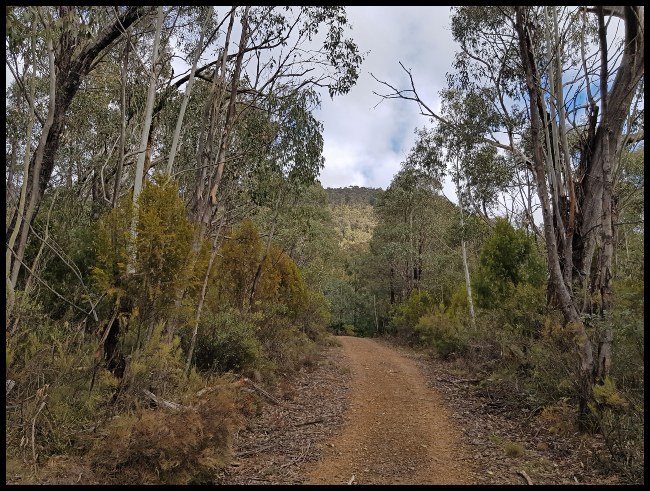 After about fifty minutes, when the trail got steeper, the views from higher up to nearby hills and peaks improved though they were still through trees making it difficult to get decent photographs. 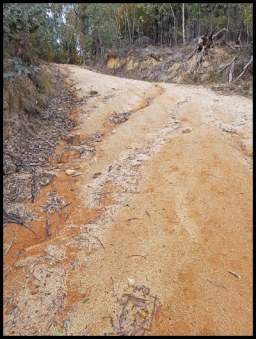 The start of the steeper section – steeper than it looks here 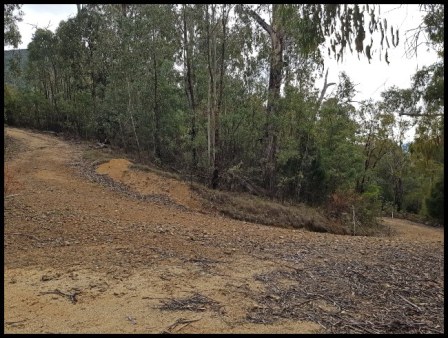 A hairpin bend in the track – steeper than it looks here 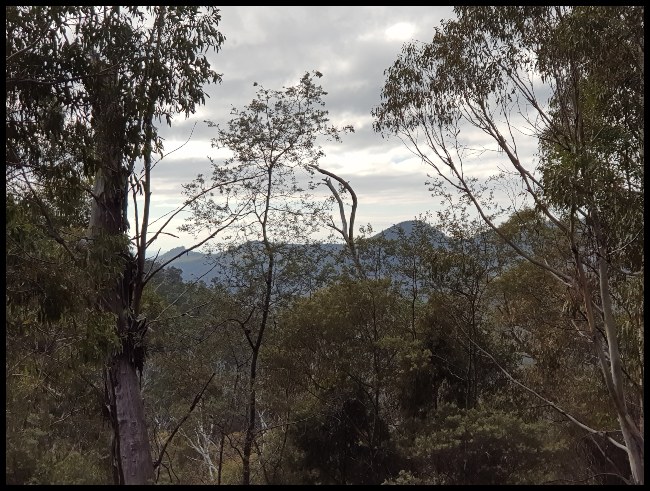 As I approached Fishing Gap I passed quite a few granite tors – a common feature in the Reserve more generally.

Fishing Gap soon appeared as a small clearing or saddle between two mountains and a small sign confirmed that I had arrived. This is a great spot for a picnic on on my way back down I stopped here for lunch, perching myself on the log you can see to the rear of the sign in the picture below.

Had I wanted to finish my walk here I would have turned around and retraced my steps to the car park and would have been happy enough though not elated by the walk.

I wanted to go a little further and from prior research I ascertained that there was a faint, though identifiable, track to a lookout just over a third of the way from Fishing Gap to the summit of Mount Domain. As I was alone and my time was limited I decided I would only go as far as the lookout, assuming I could find the track and be sure that I could later retrace my steps.

The unformed track to Mount Domain – off to your immediate right on arriving at Fishing Gap – is not sign posted and sensibly so, so as not to encourage people who are unprepared – i.e ill-equipped – for off- track walking.

Continuing on, the track was indeed faint though sufficiently visible to relatively easily follow though on a couple of occasions I had to confirm that I was on the correct route by reference to the track I had downloaded onto my phone. One tell-tale sign that I was on track was the ongoing presence of stumps of small trees and bushes that had been cleared to make the track.

The track to Mount Domain 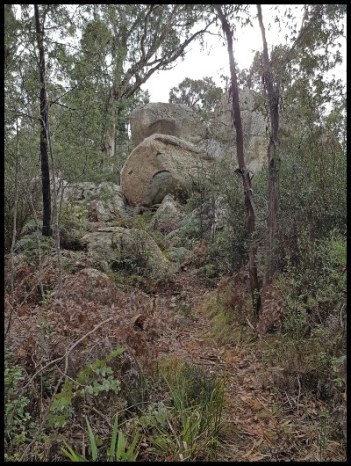 The track to Mount Domain

The track here was significantly steeper and much harder going than anything en route to Fishing Gap and scrambling across rocks, fallen trees and up very steep slopes with loose soil was a regular occurrence. For me this was fun, if at times hard work, and as indicated earlier this section turned an otherwise lacklustre walk into an enjoyable and rewarding experience.

As I gained altitude the views got better though, in the main, this section of the walk was also within a eucalypt forest so mostly there was no view out. 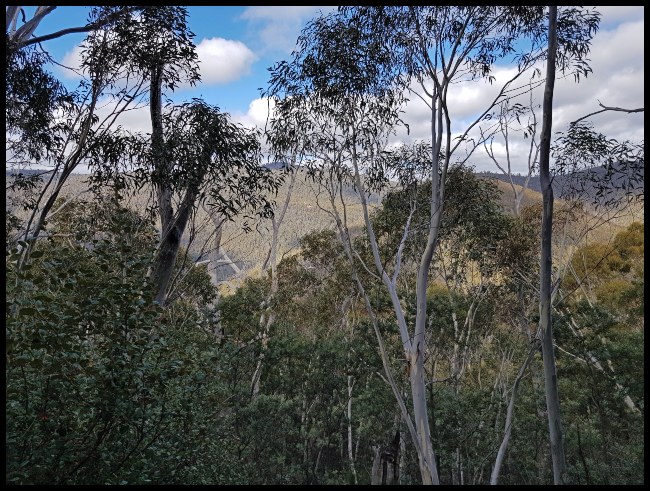 I was more than happy to admire the trees and vegetation that I was passing through. In addition to the ubiquitous eucalypts this included ferns, various types of fungi and another rather pretty flower that I have been unable to identify (Gravillea??).

After about an hour of strenuous walking from Fishing Gap, covering a distance of only about 1.2 kms with about 250 metres gain in height,  I arrived at the lookout (the edge of a ridge). From here I had pretty good views across the Tidbinbilla Valley towards Canberra and of the somewhat closer Gibraltar Peak – the walk to which is one of the most popular in the Reserve and deservedly so.

To be fair the views were obstructed by vegetation and it required a bit of effort to get into a position where they could be fully enjoyed. Having admired the views, I sat down for a short rest and a snack. Very soon it got rather cold, (I was in the shade and at a relatively higher altitude of around 1380 metres – a gain of around 530 metres from the car park) and I had to put on the clothes I had shed on the way up to the lookout. Lest I have shocked anyone I hasten to add that, despite shedding clothes en-route, I did arrive at the lookout still respectfully clad.

Prior to returning to Fishing Gap (45 minutes walk), where I shed some clothes again (!) and enjoyed my lunch lounging in the lovely warm winter sun, I had a look at the onward track to the summit of Mount Domain and it quickly became very clear that from here on there was a marked deterioration in the track and indeed it was very difficult to identify one at all. Perhaps by way of compensation the incline from here is significantly less than that of the section I had just completed. Personally I would not proceed beyond this point alone or without a  personal location device, more as an insurance against an accident as opposed to getting lost in this instance.

As it was the full walk was about just over 10 kms and with over an hour of breaks took me just less than five hours. Next time I will be aiming for the summit of Mount Domain!

This ( or more specifically the part to Fishing Gap) is walk 16 on the Discover Tidbinbilla guide which you can download or pick up from the visitors centre as you enter the Reserve.

For details on park entrance fees, other general information about the Reserve, and links to other walks see my introductory Tidbinbilla review.

This blog entry is one of a group (loop) of entries on Tidbinbilla Nature Reserve.  To continue with my next entry chick HERE.

To start at the beginning of this loop click HERE.

10 thoughts on “Fishing Gap Walk (and part of Mount Domain)”