Personally, I think Pyongyang’s Railway Station is one of the most beautiful buildings in North Korea but then again I have a thing about railway stations. While many of the high rise buildings built, at the speed of Chollima, in the city in the last five years or so may be as aesthetically pleasing, in their own ways, I wonder about their potential longevity.

The city’s first railway station was built in 1920 by the Japanese, who occupied Korea at the time. It was of similar style to that of the old Seoul station also built, a few years later, by the Japanese. Of course in those days it was possible to travel between the two cities by train, something that is not currently possible. Hopefully that will change soon.

The original station was destroyed, by bombing, in the Korean War. The current three story (plus basement) building, built in 1958, is classified as socialist style architecture but it is far from the boxy 1950s Soviet type buildings more commonly built in Pyongyang after the Korean War. The station is the central railway hub of North Korea both for domestic and international train travel.

Especially noteworthy on the exterior of the station are the classical type caps on the otherwise bland block columns, the stunning clock tower and the two bronze statues, one on either side of the roof of the central part of the building. Rather than being common-or-garden Roman goddesses or Greek nymphs more common in the west, the statues here have that great socialist feeling and are of two Korean workers. An additional two figures can be seen on the rear of the station. Again providing that North Korean vibe to the building, the slogans on the roof of the station read “Long live the Great Leader Comrade Kim Il Sung; long live the glorious Workers’ Party of Chosun.” 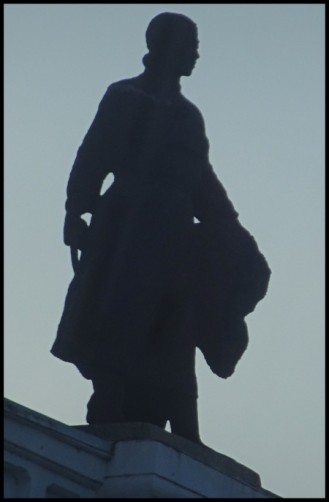 Whoops, I almost forgot to mention the omnipresent pictures of Kim Il-sung and Kim Jong-il which adorn the facade of the station, as they do every other public building in the country.

The area in front of the station, in addition to being a busy drop-off and pick-up zone is an important meeting place and it’s giant TV screen is in constant use for the dissemination of news, details of mementos events and other information – i.e. in the main they stream local television station news content. While we were waiting there one evening, obediently in our bus, nice sunset scenes were being displayed. Note also the inclusion of a billboard advertising a locally produced car in the first picture below – one of the few billboards in North Korea.

Of course more serious matters of the moment are also displayed on the TV screen. The images below (from Jon Chol Jin/AP and Ed Jones/AFP/Getty Images respectively) show, firstly, cadres watching the launching of a Hwasong-12 strategic ballistic rocket in September 2017 and, secondly, an attentive crowd watching a statement delivered by Kim Jong Un relaying China’s intent to limit oil supplies to North Korea, again in September 2017.

An excellent 360 degree image of the station and the square in front of it can be seen here:

Being a great fan of trains, when leaving North Korea in 2014 I jumped at the opportunity to take the Pyongyang – Beijing train though I did do a 24 hours stopover in Sinuiju on the border with China en route. This train trip from Pyongyang is the subject of a separate review on my North Korea 2014 – Introduction section – Getting out of the DPRK by Train. Suffice it to say here that the quality of this international train, internally and externally, while basic compared to international standards, was far superior to anything available to locals on trains plying the rails within North Korea. 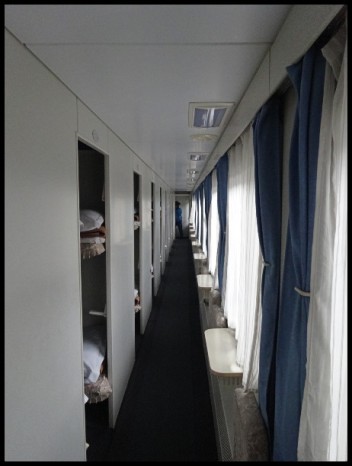 I was hoping that when we got to Pyongyang station for that trip out we would have had a good opportunity a look around. Sadly, that wasn’t to be and we were shepherded into what was obviously a VIP style lounge for international travellers, on the right hand side of the building (looking at it face on).

While jaded, the lounge was well appointed with sofas (complete with crocheted back and arm covers) and a small shop. The walls were decorated with a small amount of revolutionary artwork and yet more pictures of the Leaders. It was unclear as to whether photography was permitted inside the station or not hence my single rather poor quality picture.

Surprisingly, there was no problem whatsoever with taking pictures on the marble platform which was, not surprisingly, spick and span if, like the waiting lounge, a little dated. That said, everything ran very efficiently when the masses were admitted to board to train. 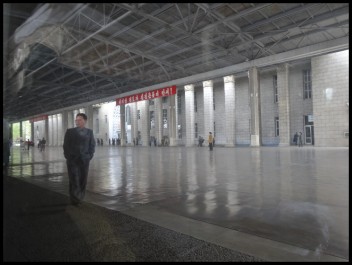 Noticeably missing from the station platforms were locomotives. I will mention these again in another more general review but will just say here they are not the most modern of things. This has been admitted by none less than Kim Jong-un who has identified the upgrade of locomotives, rolling stock and the railway system more generally as a priority in recent discussions with the South Korean President, Moon Jae-in.

Even our own train backed into platform 1, the most spacious and upmarket of the station’s five platforms, so we were not able to see what would be hauling it.

On leaving the station I managed to get a couple of photos of a locomotive engine, typical of others I saw in 2014 and 2018.

What was noticeable was that the carriages on our international train were much more modern than local carriages, a few of which could be seen on other tracks within the station. 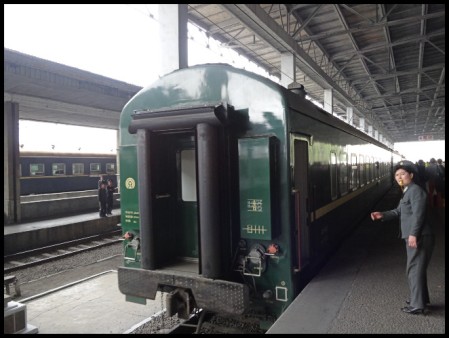 North Korean Railways emblem on the train to Beijing

I feel that until improvements occur the railways/trains will remain almost a taboo subject for visitors, while the rules around railway photography will also continue to be unclear, at least in practice. I found out the later when I was admonished, albeit by our bus driver, for taking the photo below in a street in Wonsan in 2018. Our guide subsequently assured me it was permissible to have taken the photograph and that the driver had been incorrect in his assessment. I do hope the driver still has his job!

In 2018 I flew into and out of North Korea so did not have access to the interior of the station or the platforms.

While many agents now offer tours with travel into and out of the country by train as standard I recommend that you fly in and take the train out. Even as a train buff, I think doing the trip by train once is (essential) sufficient and of course you should also experience Air Koryo – a must do in itself.