See a Camel Caravan on Eastcheap

Having admired what is reputedly London’s smallest sculpture of two mice duelling over a piece of cheese on Philpot Lane, literally cross Eastcheap to admire what to-day seems a somewhat out of place relief on the circular corner tower of No 20 Eastcheap.

The relief depicts a Bedouin Arab in his flowing robes guiding a train of three laden camels across the desert, passing the remains of a fourth camel lying in the sand.

This whole side of Eastcheap was demolished in 1882 to allow construction work to be completed on the Underground’s Metropolitan Line. When it was rebuilt in 1883-4 the Peek Building, as it was named, at No. 20 became the London headquarters of a company called Peek Brothers & Co, later Peek Brothers and Winch Limited.

Peek Brothers & Co were by the early 1880s running a very successful business importing tea, coffee and spice with one if its most successful brands being Camel Tea. My reader who may be familiar with civet coffee (kopi luwak), produced from beans previously consumed by and subsequently defecated by this small animal in the South East Asia (mainly Indonesia), need not be alarmed as here the word ‘camel’ was merely used for marketing purposes and has nothing to do with the source or constitution of the tea. The link here is that the picture depicted was the trade mark for Camel Tea (and Peeks) and much of the produce sold by the company was probably transported via this ship of the desert.

The relief was created by William Theed the Younger.

Tweed is perhaps better known for his much larger work on the Albert Memorial in Hyde Park for which he carved the marble ‘Africa’ ensemble, including a camel.

It is rather interesting, indeed peculiar, that Theed should have been invited to undertake or that he 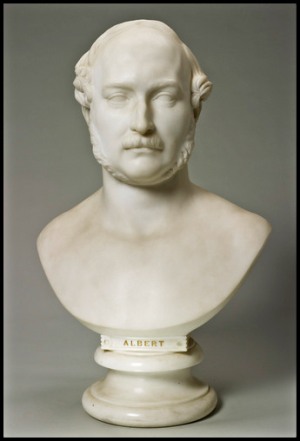 would have accepted a commission for this, in reality rather trivial, relief for Peek Brothers & Co as he had shown upwards of eighty works at the Royal Academy between 1824 and 1883, and from the 1840s he had enjoyed the extensive patronage of the royal family being particularly favoured by Prince Albert (whose death mask, together with a commemorative marble portrait bust, (pictured alongside), he produced after the Prince died in 1861). Perhaps the Royals didn’t pay very well!

That said, the Peek family was by this stage a highly respected and undoubtedly well connected London family …… possibly biscuit suppliers to Her Majesty, Queen Victoria though I have no evidence for this but I can imagine Queen Victoria dunking a Garibaldi in her Peeks supplied tea! Giuseppe Garibaldi, a guerrilla fighter and Italian patriot, was somewhat of a cult figure with everyone in Britain, that is except the Royal Family which shunned his visit to London in 1864.

I refer to this particular biscuit as it was one of the early creations of Peek Frean & Co (1861) another of the Peek businesses of the day, having opened in 1857.

Francis Peek was the marketing genius behind this company and was the first promote the view that tea and biscuits should go together. Who better to make those biscuits than Peek Freans?

Initially the company produced dry, tasteless ‘ship biscuits’ commonly referred to as ‘hard tack’ and used in army rations. It soon moved on to various other sweeter and more palatable creations including Garibaldi, Pearl, Marie and Golden Puff amongst others.

The company’s major breakthrough came in 1910 with the production of the famous Bourbon biscuit – the first ‘cream sandwich biscuit’. Soon the Custard Creme (a favourite of mine!) and the rather sweet Nice biscuits followed.

Peek Frean & Co did not invent the ‘cream sandwich biscuit’. That accolade goes to Harold Trixie, a housemaster at the King Edward VI Boarding School in Nottinghamshire who used to, given the poor school rations, bring in his own home cooked biscuits, including the cream sandwich biscuit, and other goodies and dispense them to his boys during informal afternoon teas disguised as demonstrations in good etiquette. Peek Frean & Co got wind of what was going on in Nottinghamshire and approached Trixie offering to pay a fee to reproduce his biscuits on a larger scale. Trixie sought no fee indicating that his recipe was free to whoever cared to bake it.

I fear I have somewhat digressed but feel sure you wanted to know about the origin of some of your favourite biscuits.

Sadly Peek, in none of its manifestations, exists today with the biscuit wing of the business being the last to close in 1989. Happily this relief, now listed, remains as an ongoing reminder of a great British Company.

20 thoughts on “See a Camel Caravan on Eastcheap”