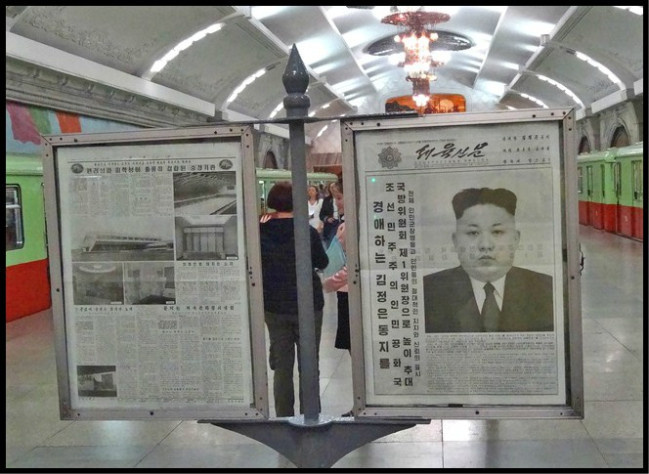 The Media and Freedom of Communication in North Korea

Because of these constitutionally enshrined freedoms North Koreans and their media have absolute freedom to say anything positive about the Leaders, the Worker’s Party and the country in general. In fact they are strongly encouraged (required) to do so. Why be negative when there is so much to be positive about? Who really wants to hear about economic hardship or famines?

Freedom of speech / of the press in no country permits people to say or print what they like. Most of us are not permitted to abuse others through racial vilification, slander, defamation, etc, etc.

In North Korea this restriction on absolute freedom is interpreted as not being permitted to say anything negative about the Leaders, the Worker’s Party or the country generally.

Consequentially, the North Korean media is one of, if not the most, strictly controlled in the world. In his ‘advisory’ book, the ‘Great Teacher of Journalists’, Kim Jong-il’s advice was that “newspapers carry articles in which they unfailingly hold the president in high esteem, adore him and praise him as the great revolutionary leader”. He was speaking of his father, not himself!

While the government may not directly run every media outlet in the country their only source of information is the State run, Korean Central News Agency (KCNA). Given this, all media outlets serve as mouthpieces for the regime and all are certainly monitored. Not only does the KCNA actively govern content it also governs timing as to when news is released. For example, the death of Kim Jong-il was not announced until two days after it occurred and, until Kim Jong-un’s recent trip to Singapore to meet President Trump, which was announced in advance, overseas trips made by the Leaders were never reported until the Leader was back safe and sound in Pyongyang. In general terms, good news (and that rather perversely includes updates on any threat to the country by wicked imperialists) is disseminated without delay while bad news is delayed to an opportune reporting time or not relayed at all.

Apart from the few officials charged with monitoring the external world, North Koreans trying to access foreign media, in any form, risk imprisonment and forced re-education.

Members of the local press must be ideologically sound and approved, as must their families. It is extremely difficult for non-resident foreign media to gain access to the country and when they do they are escorted by especially trained guides and minders. Tour companies who bring in journalists as ‘tourists’ are subject to severe penalties – including loosing their license to operate in North Korea.

Insofar as I could tell, and notwithstanding the introduction of the Intranet (North Korea’s Internet) and an explosion in the availability and use of mobile phones within the country very little, if anything, has changed in terms of press freedom, or the freedom of speech more generally, since my 2014 visit. The use of mobile phones (for the general populace) is restricted to within the country and is very closely monitored with the phones allegedly containing ‘sophisticated surveillance properties’ (Reuters).

Likewise, Intranet (the general populace have no access to the Internet) content is chosen by the authorities and its use is very closely monitored. Its approximately 5,000 web pages mostly contain propaganda.

In 2014 we came into relatively close contact with the press on one occasion, in the Kim Il-sung Stadium on the occasion of the Pyongyang Marathon, but what we saw was reflective of what I have seen in other televised events. The press officials all dressed in the same grey outfits, carried rather dated equipment and, it would appear, came equipped with a personal step ladder. In 2018 we didn’t get as close to the media though those we did see around Pyongyang during National Day celebrations and in the May Day Stadium for the Mass Games had the same appearance (and gear) that they did in 2014.

The gentleman on the left in picture below looks like an interloper of some sort – possibly a rare example of an official foreign journalist as there were a few at the Marathon. 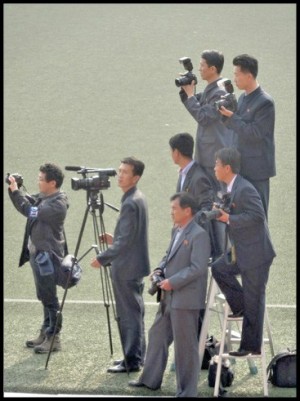 Contrary to the general assumption that foreign journalists are not welcome in, and are barred from, North Korea there are a handful of foreign media organisations with a permanent presence in the country. These include the Associated Press (AP), Agence France-Presse (AFP), Russia’s RIA Novosti, Japan’s Kyodo news agency, and China’s Xinhua news agency. Associated Press was the first foreign news agency to open in North Korea doing so in 2012 with Ms Jean H. Lee as bureau chief. Immediately after my return to Canberra from my 2018 trip I was fortunate enough to attend an informative talk given by Ms Lee on the trials and tribulations of setting up the bureau and operating from Pyongyang. What was heartening to see was that many of the locations Ms Lee was able to go to, as a journalist, in her early years in the country are now ‘open’ to tourists as well.

Shortly after the opening of AP’s bureau in Pyongyang, Reporters Without Borders, in its Press Freedom Index, moved North Korea from the world’s worst location for press freedom to second worst – just ahead of Eritrea. It has subsequently moved back into last position. Notwithstanding Ms Lee’s view, which I agree with, that having a foreign media presence within the country is a good thing, Reporters Without Borders sum up that ‘In reality, the regime continues to exercise meticulous control over the information available to the foreign media’.

Current UN sanctions on the country preclude any new foreign media organisation from setting up in North Korea though ironically that does not stop certain people lambasting the ‘quality’ of information coming out of the country. You can’t have your cake and eat it!

In terms of newspapers, there are a number of Korean language papers available in addition to one weekly English language paper – the Pyongyang Times. The most widely read and authoritative newspaper (though they all have basically the same news) is the Rodong Sinmun, the official newspaper of the Central Committee of the Workers’ Party of Korea.

Local papers, in addition to presumably being on sale somewhere, are displayed in public places such that the people can have ready and free access to the ‘news’. What a shame it would be if the masses somehow were not fully aware of the heroic exploits of their leaders and their latest revolutionary thinking or were unable to read about the latest on-the-spot guidance delivered! 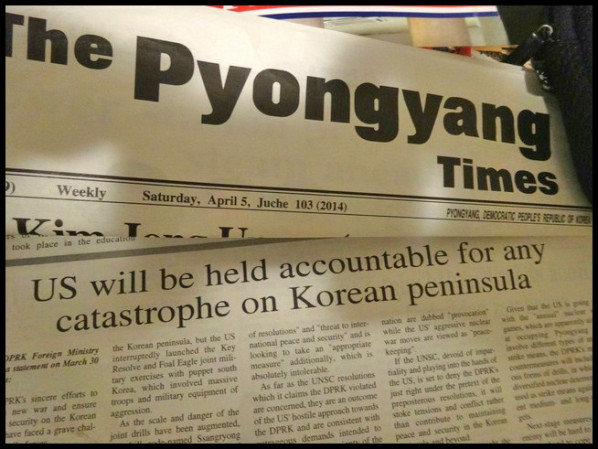 In 2014 all passengers got a copy of the Pyongyang Times on the flight into the country. Pictured above is the copy I received then (I will come back to the headline in this paper in a separate review on Americans in North Korea). In 2018, perhaps it is just a sign of the growing stinginess of airlines everywhere, papers were handed out during the flight and, as invariably happens, they were snapped up by people in the first few rows. Should you fly into Pyongyang from overseas and you are lucky enough to get a newspaper don’t forget to retain it as a souvenir. In the event that you do not get one from the plane do not panic as they cost less than a dollar and are readily available, as are back issues, in the Foreign Language Bookshop and in hotels (especially in Pyongyang).

One thing all papers, Korean and English, seem to have in common is that they almost always have a picture of the current leader on the front page (in addition to numerous more throughout). Given this, it is important that you treat your newspaper with respect. This means, no throwing it in the bin, scrunching it up or folding it in a way that results in a crease across the Leader’s face. Engaging in any of these actions constitutes insulting and disrespecting the Leader, something that comes with a severe penalty for a North Korean.

As a tourist, inadvertent mistreatment of a newspaper would generally go unremarked but do take care not to offend your guide by disrespecting images of their Leaders. I say ‘generally’ mindful of the 2016 Otto Warmbier case. Without getting into the details of that case  – the Korean and US versions differ – in North Korea the story goes that not only did Warmbier remove a political poster bearing the name or the image of Kim Jong-il he proceeded to stomp on it. This insensitive act would certainly have resulted in harsh punishment for a local person but, as per our Korean guide, the fact that he was punished and the severity of that punishment was largely the result of undue interference from the US Government in what was initially locally seen as a lessor issue, given that Warmbier was a tourist. Of course no-one, outside a few people, knows what really happened in this case.

My main photo is of a local newspaper displayed for commuters to read on a platform in the Pyongyang Metro. Hardly a very flattering picture of Kim Jong-un, and yes there is even a crease across his chin – probably breaches a couple of the rules I referred to above.