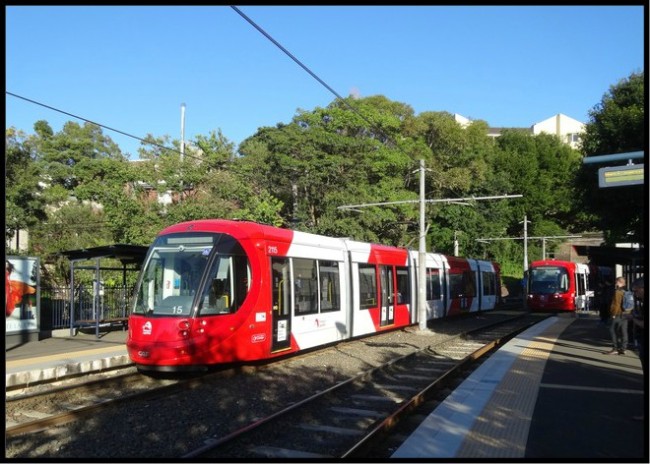 This is the simplest form of Sydney public transport to tell you about as there is only one line, though as I write (December 2017) construction of an extremely controversial line connecting Central Station and Circular Quay via a track down George Street is underway. It will be the world’s most expensive light rail system on a per kilometre basis – if that’s any claim to fame. And that’s before the budget blow-outs occur.

The current light rail system runs from Central Station to Dulwich Hill with a significant detour to take in The Star casino. It operates 24 hours per day with a late night focus on getting punters between the City and the casino. The frequency of trains varies a bit so rather than try and relay the detail here I invite you to visit the website below. Suffice to say that during daylight hours trains run at around 10-15 minute intervals. 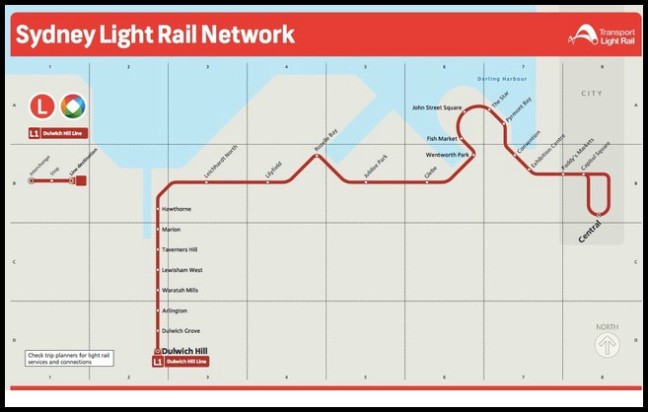 From an average tourist perspective you are unlikely to want to go beyond Rozelle Bay (a trip of 30 minutes from Central Station).

Glebe – to explore the trendy suburb of Glebe

The Star – The Star Casino

While there are stops at Capitol Square (lower George Street for the city) and Paddy’s Market you would be unlikely to want to walk up the hill to Central Station, basically past these stops, to catch the train back down to them! Of course if you arrived at Central Station you could use the light rail to go to these places but given the short distance to them it would be quicker and easier to walk unless you are carrying heavy luggage.

The trains themselves are all relatively new and in good shape.

All Sydney transport requires you to have an Opal Card (recommended) or to pay an Opal Single Trip fare (not recommended).

Light rail fares are based on distance travelled.

While officially paper tickets no longer exist for use on Sydney Transport the Opal Single Trip Fare is the (more expensive and restrictive) equivalent. For light rail they are available from machines at certain stops only with some machines only accepting credit cards. In short forget about Opal Single Trip fares and buy an Opal Card.

Please refer to my separate review on the OPAL Card.

In the event that you are using an opal card, ensure that you tap-on (validation) prior to boarding the train and tap-off once you leave the train using the machines you will find on the platforms (similar to the ferry machine one in picture 4). You cannot tap-on or tap-off on the train. If you fail to tap-off you will be charged as if you travelled to the end of the line. If you fail to tap on you will be travelling without a valid ticket and dealt with accordingly.