Opal Card – All You Need

Sydney has not long since moved into the 21st century and come up with its Opal Card – Sydney’s version of London’s Oyster card, if you like.

The Opal Card, which you pre-load with cash, works on Sydney Ferries, Sydney and metropolitan trains, the light rail system and Sydney Buses.

While paper tickets and all forms of passes and travel cards ceased to exist in August 2016 you can still buy what is now called a Opal Single Trip fare. Frankly, given the complexities of using these (and paying more for the pleasure of so doing) it makes no sense whatsoever for a visitor to even consider them.

With the Opal Card, the fare you ‘nominally’ pay is conditional on all sorts of things but I suggest you just ignore all published fares and the rules around them and you will be fine. Just understand the following (for a ‘standard adult’):

Note that in relation to point 6 that a journey does not equal one trip (though it can) but rather can be a sequence of trips on a single mode, e.g bus where the break between exiting one bus and entering another is less than 60 minutes (and 60 minutes on all other modes except the Sydney Ferries Manly service where the transfer time is 130 minutes). Unpaid journeys, after you have hit a cap other than the weekly cap don’t count.

In terms of budgeting use the information in 1-5 above and add credit accordingly. Unless you plan on returning to Sydney don’t overdo it in adding credits as getting a refund is painful – ‘You’ll need to complete the form, return it with your Opal card to Transport for NSW and have an Australian bank account and address’.

I have included specific fares for each transport type on my separate light rail, ferry and bus reviews. I have yet to add a train review (Max $3.46 per trip of less than 10kms using Opal Card). Two ferry (the most expensive form of transport) trips and a train/bus trip take you to about the daily cap.

Train travel to the airport incurs a surcharge but while not covered by the caps referred to earlier use of your Opal Card minimises the surcharge and the non surcharge part of the fare is included in the caps.

All costs stated in this review relate to ‘a standard adult’. Various concession fares are available with very good looking offers for the elderly (Australian residents only). Check the Opal website for detail.

Sydney Transport is expansive so you can use the Opal Card to get to the Blue Mountains, The Central Coast, The Hunter, Illawarra, Newcastle, Goulburn and many more places well outside the City.

Cards can be registered (but don’t have to be) and thus cancelled and money transferred to a new card should you loose the card.

Getting and using an Opal Card

Purchasing an Opal Card – The card itself is free though useless without a credit. A card with credit can be bought online or at loads of places throughout the Sydney region but not from Sydney Transport itself (so you can’t get one on a bus, at train stations, on the ferry etc, etc – with the important exception of the two Airport train stations where you can get a card). Top-ups can be done online, at card sales outlets as well as via machines at most train stations and ferry wharves. A full list of outlets can be viewed on the website. 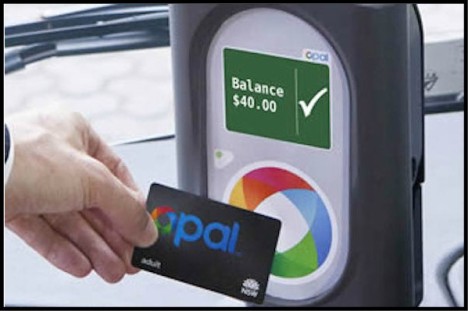 While lengthy, the above is a condensed version of Sydney’s Opal system. There is loads of additional detail on the Opal Card website. Pictures 2 – 4 attached courtesy of Opal.com.au

4 thoughts on “Opal Card – All You Need”