During Canberra’s centenary year, 2013, a free tourist bus service was introduced – Route 100. This was a great addition for visitors to the city (and locals) as it served all the main tourist sites within the city area. It was scrapped in 2014, primarily due to opposition from the, then $35/day, hop-on-hop off service which ran pretty much the same route, though much less frequently. Check out the new Tourist Loop bus service No 81/981 for a similar route coverage – noting that this is a standard pay service.

On 4 July 2016 a new free service started. This one, Route 101, runs a completely different route going nowhere near any of the city’s main tourist attractions. Rather, it runs a loop around the city centre, of little value to tourists or indeed anyone else apart from residents of New Acton wanting to get into the city centre or Australian National University students living in Braddon wanting to get into uni. As it operates only in one direction it would be faster for these folk to walk home than go round the full loop. 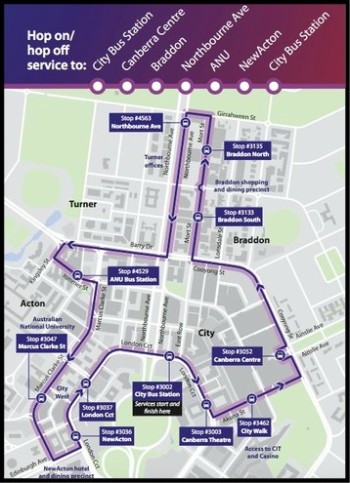 Anyway, as it is a free service, if you come across it and can use it for a stop or two within the city area (picture 2 attached), perhaps down to New Acton for lunch or a coffee – go for it. It is certainly not a substitute for a regular bus pass or tickets to visit the city’s main attractions.

Note that Route 101 does not operate on weekends. It runs in an anti-clockwise direction every 10-15 minutes between 7am and 7pm. The bus is of high quality, is easily accessible, and can accommodate wheelchairs, prams or strollers. Unlike some of the city’s other buses, the city loop buses do not have a bike rack but then again if you had a bike you would certainly not be needing to use the service.

I imagine the hop-on-hop-off operator won’t be complaining about this one. Indeed its nominal start and finish point is a very short walk from where the hop-on-hop-off service starts. I wonder if that is coincidental! This time it’s the turn of Canberra’s long suffering rate-payers to complain .

My first photo attached is courtesy of ABC News.