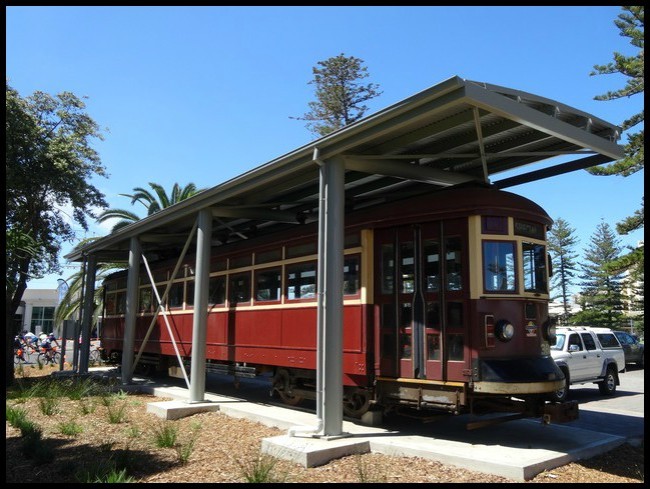 In 1873 the railway line between Adelaide and Glenelg was build by the Adelaide, Glenelg & Suburban Railway Company Ltd. Until 1899 the company operated steam trains on the line when it was acquired by the state owned South Australian Railways (SAR) which ran the trains until 1929.

In April 1929 ownership and operation transferred from the SAR to Adelaide’s Municipal Tramways Trust (MTT) which immediately closed the line and converted it to a standard gauge electric tram-line.

Thirty H-class trams (nicknamed Red Rattlers) were built for the line by a local manufacturer, A. Pengelley. The line re-opened on 14 December 1929 and the first “Bay Tram” completed its journey to Glenelg. The trams were 50 feet long, seated 64 and could reach a maximum speed of 40 miles per hour.

In addition to the standard H-Class trams, in the 1930s the line operated “horse trams” – specifically designed trams used to transport horses to and from the racecourse at Morphettville (which incidentally still operates today – the race course not the horse tram). One of its first horse customers was Phar Lap, a legendary Australian Race horse – the heart of which you can view in the National Museum of Australia should you visit my home town of Canberra.

Of all the trams that operated in Adelaide the “Bay Tram” was always the most popular with commuters, shoppers, race-goers and tourists. On the 28 December 1939 – Proclamation Day in the State’s Centenary Year – it transported 45,000 people in a single day.

A major review of the tramway network in the 1950s saw the whole network apart from the Adelaide – Glenelg line closed. 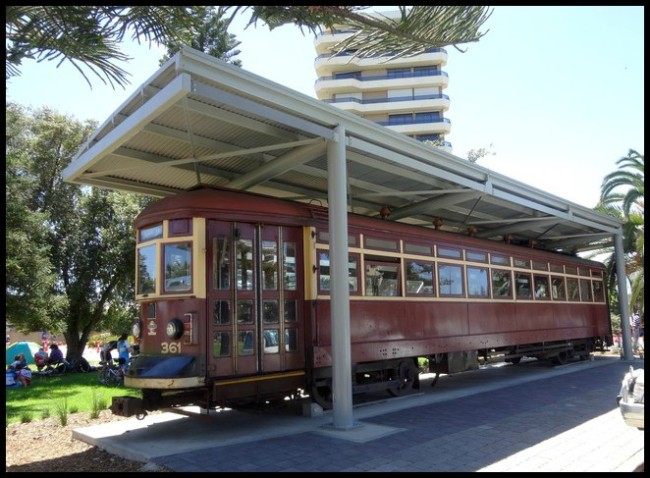 While the 1929 trams were updated a few times, in essence, they remained very true to the original design until there were totally replaced with the modern trams which operate today. The interiors remained varnished wood and the glass was etched with MTT logos. There was no heating or air conditioning and they continued to rattle! While most of the trams were replaced in 2006 a few continued to operate at weekends and on other special occasions until mid 2013.

Five refurbished H-class trams are still in the fleet, stored in depot awaiting a decision on their future.

I really do hope they are returned to service – I would certainly like to relive an experience I first had probably 20 years ago now.

In the meantime visitors will have to content themselves with looking at the old Red Rattler tram preserved here at Glenelg.