There is a saying – ‘familiarity breeds contempt’ and this certainly applies to me in terms of “the Port” as it referred to locally. For more than a decade now I have spent every Christmas within a couple of kilometres of Port Adelaide and visit it regularity – to such an extent that I became oblivious to its attractions. Many readers will be familiar with this condition.

On reflection, there is much to see and do here and I would certainly recommend a full day – spending the evening in nearby Semaphore, if time is tight. Indeed, if you visit Adelaide a visit to the Port is a must do – if only to visit the National Railway Museum which I rank as one of the best railway museums in the world – and yes, I am a railway buff!

In addition to the Railway Museum the Maritime Museum is also most worthy a visit. Port Adelaide is also home to the South Australian Aviation Museum which may also be of interest to some readers.

One of the best things to do in Port Adelaide is to have a stroll around the streets and take in some of the finest historic colonial and Victorian buildings in South Australia. Oh, if only the walls could talk – imagine some of the stories you might hear in this historic maritime port.

South Australia was established as a State in 1836 and Port Adelaide, shortly thereafter in 1840 from which time it played an integral role in the colonial development of South Australia. The area’s first migrants had to wade through the mosquito infected mud swamps of nearby “Port Misery” until facilities were built at Port Adelaide.

“This is Port Adelaide! Port Misery would be a better name; for nothing in any other part of the world can surpass it in every thing that is wretched and inconvenient”.

By the 1870s Port Adelaide was a thriving port with wharves, storehouses, chandlers, sail makers, shipping offices and homes as good as any in Australia. A significant number of these early buildings remain today and are likely to remain as in May 1982, a sizeable part of the town centre was declared a State Heritage Area.

Drop into the tourist office (open 7 days per week except Christmas Day) and pick up its “Walk the Port” brochure and go for a stroll. The three museums I have mentioned above are along the walk. If you just walk you can complete the walk in about an hour and a half. Fit in a couple of hours each for two of the museums and a few additional stops and there you have the makings of a very enjoyable day. The majority of my upcoming reviews are related to sites along the “Walk the Port” walk though for those not following the walk I have included full addresses and other relevant details in my reviews.

As one might expect of a port area there is almost literally a pub on every corner and I will refer to a number of these establishments in my reviews. Indeed the council has been very thoughtful (unwittingly so, I assure you) and pre-prepared a pub-crawl for those interested. It’s perhaps best if you ask for a copy of the “Heritage Pub Trail” at the tourist office rather than the “pub crawl guide”! 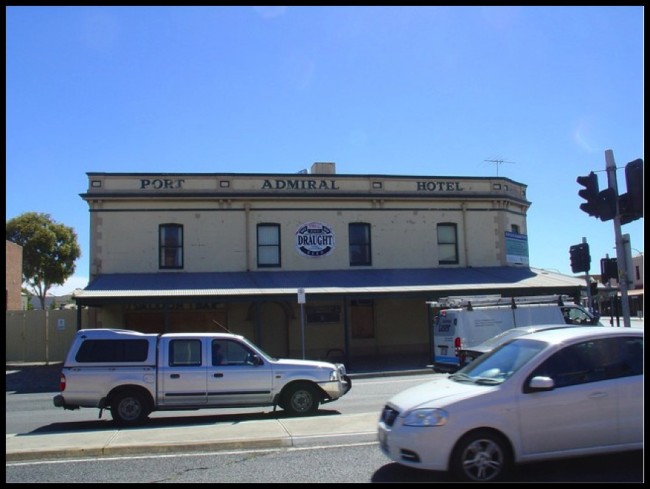 I should point out that you will find Port Adelaide much less frequented by tourists (a bonus!) and much more lacking in tourist facilities (aka fun parks, cafes, ice cream parlours, tourist orientated accommodation and the like) than nearby, and probably, more famous Glenelg. The reason for this is the local council’s absolute aversion to any form of development not to its overly conservative liking. The creators of the State Heritage Area in 1982 beat the developers!

It has been a long-time view of mine that the council’s essentially anti development policy (or not changing with the times) has adversely restricted and hindered the port area. The construction of the Outer Harbour, to handle larger ships and the introduction of containerisation in the 1960s both lead to a decline in size of the local maritime workforce. This coupled with a transfer of the retail sector to major shopping centres in nearby suburbs saw a significant decay in the port area. Port Adelaide’s heyday had past.

Otherwise beautiful buildings were left empty and let go to ruin (or vandalised) while shops in the main streets were vacated and boarded up as developers simply could not adhere to council development policy and at the same time make a buck in an area people were naturally leaving. This does not mean I am in favour of tasteless development, far from it. There is a balance that needs to be struck.

Thankfully there seems to be a change afoot and in recent years there has been significant progress in developing the historic prescient of Port Adelaide. While there are still a few buildings  to be restored now is certainly the time to visit before the pendulum swings to far in the other direction as it invariably will. The Port Admiral Hotel (picture above – 2015) lay vacant from 2006 until it was finally restored and re-opened in late 2017.

Anyway – of my high horse and let’s get on with our tour of Port Adelaide……….

This is the beginning of a series of reviews on Semaphore. For my next review click HERE.

2 thoughts on “The Historic Maritime Heart of South Australia – Introduction”