The Arch of Remembrance has pride of place in Brighton, on the foreshore right in front the jetty. Indeed, it is a grand and formal entrance to the jetty.

Rather different than the standard WWI memorial, this arch (or rather the original one) was designed by J. D. Lyons of Prospect (an Adelaide suburb) who won a competition run by The Town of Brighton and was constructed in 1926 (photo below) to remember the 114 people (of whom 22 died) from the Brighton area who served in the ‘war to end all wars’ (WWI).

The large central bronze plaque on the front of the Arch is the insignia of the Australian Imperial Force (A.I.F), better known as the Australian Army “Rising Sun” Badge.

Those with a good eye for detail will note that the dates recorded (within laurel wreaths on the front of the Arch) for WWI are 1914 to 1919. While WWI officially ended on 11 November 1918, members of the armed forces were not demobbed out of the services until their return to Australia which would not have been until some time in 1919. As such their service to Australia continued until 1919, the date recorded on the Arch. 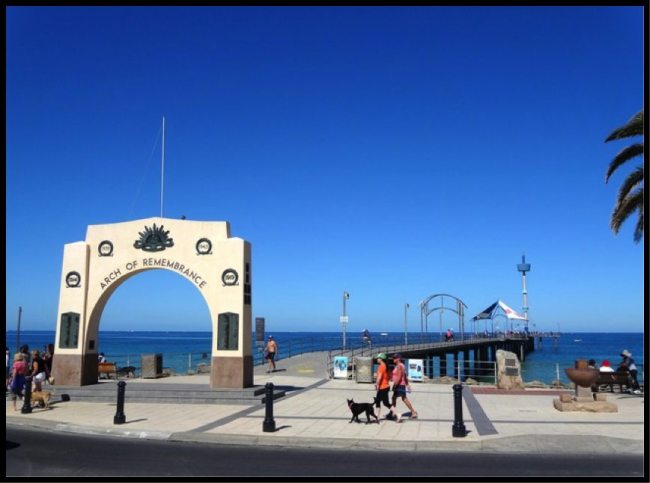 As intimated above, the arch you see today is a copy of the original 1926 Arch which was damaged in a storm in 1963. My final picture below was taken (though not by me!) on the day the original Arch was opened in 1926.

It is from the resources of the State Library of South Australia. The current Arch was constructed in 1964.

Address: Brighton Foreshore
Directions: On the intersection better Jetty Road and the Esplanade.