A Tribute to a Noble Woman 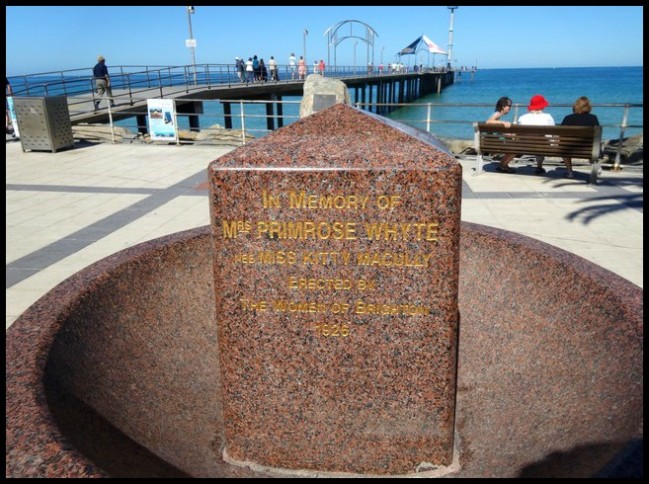 To the right (looking out to sea) of the Brighton Arch of Remembrance is this marble drinking fountain (non functioning), a memorial to a Mrs Kitty Primrose Whyte. It was erected in 1926 by the women of Brighton.

Kitty Primrose Whyte (nee Miss Kitty Macully) was the daughter of Reverend Alexander Macully (more on him, a bit of a character, in another review!), the Rector of St Jude’s Church, here in Brighton.

Kitty was an adept swimmer who regularly taught local children how to swim. In 1919 she won the Grand Diploma of the Royal Life Saving Society and was officially recognised for her role in saving a lady from drowning.

In 1926, aged 35, having just given a swimming class Mrs Primrose Whyte decided to go for a swim herself. She dived off the jetty and, in a cruel twist of fate, given her passion for water safety, was immediately dragged under the surface by a 12 ft shark. Badly mutilated, she died en route to the hospital and in so doing became South Australia’s first recorded shark attack victim.

This fountain was designed by John Tillett and was placed on display in 1927. There was no unveiling ceremony, as the committee did not wish to the recall the manner in which Mrs Primrose Whyte died.

The title of this review is how a local newspaper, the ‘News’, referred to the fountain in 1927.

To the left and rear of the Arch (again looking out to sea), a new and much more modern memorial ‘celebrating her life – not her tragic death’ by local sculptor, Gerry McMahon was unveiled in 2011. This stainless steel sculpture depicts a life-sized Kitty and two children, clad in 1920s swimming attire, frolicking in the water – between the lifesaver flags, naturally. 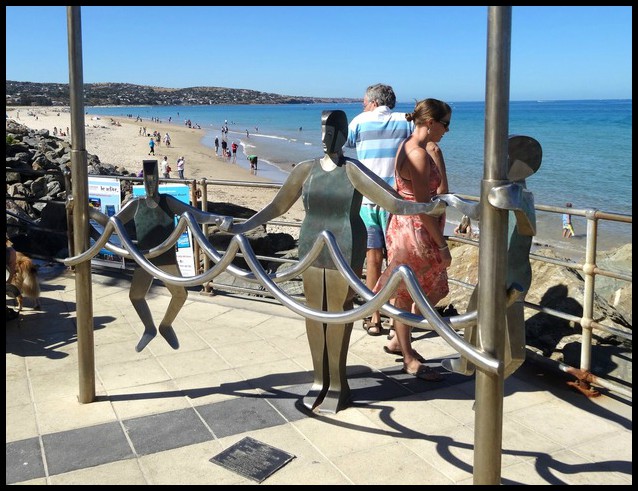 In another Adelaide review – Shark Attacks and Beach Safety – I refer to another much more recent memorial to Nicholas James Peterson, the victim of a fatal shark attack in 2004, a few kilometres north of Brighton, at West Beach. Without wishing to unduly labour the point, as the risk of a shark attack remains low, these two memorials and Peterson’s memorial do present a sobering reminder of the dangers of the sea.

Address: Brighton Foreshore
Directions: On the intersection better Jetty Road and the Esplanade. Adjacent to the Arch of Remembrance.

4 thoughts on “A Tribute to a Noble Woman”