Outer Harbor Station And Its Artwork 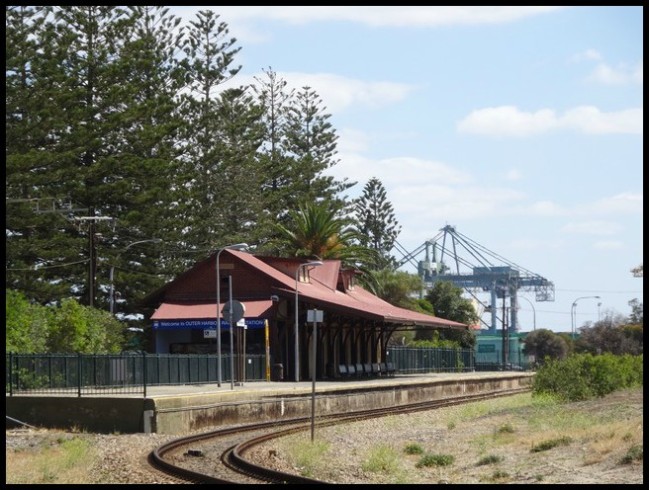 Outer Harbor Station, on the northern tip of the Lefevre Peninsula on the Gulf St Vincent, is the terminus of the Outer Harbor Line which starts in the city at Adelaide Railway Station.

I include a review on this specific station for three reasons:

1. Port Adelaide Passenger Terminal is at Outer Harbor. This is the terminal used by ocean going vessels, including cruise ships visiting Adelaide. As such, depending on your ships time of arrival / departure the train may present a very cost effective option to get to or from the city centre. Note that a day-trip ticket which covers all Adelaide train, bus and tram transport to 4.30am the following day costs about the same as a return fare from Outer Harbor to the City. The station is a 200m walk from the passenger terminal. 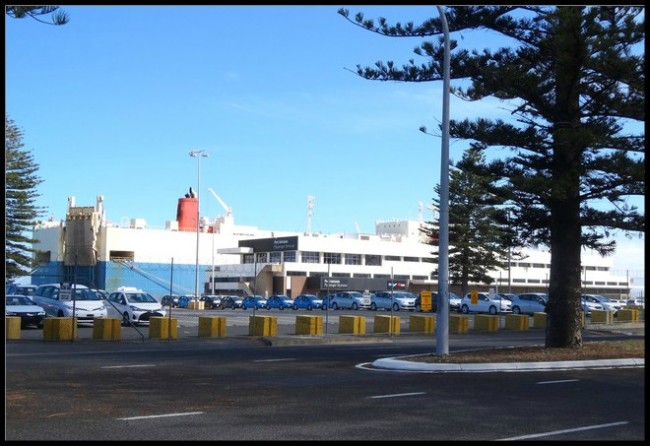 2. It is a perfect starting or finishing point for a cycling trip along the beautiful Gulf St Vincent coast. Please be aware that you cannot take bicycles on buses or the Glenelg tram but you can on the train.

3. It is home to a couple of pieces of nice artwork, worthy a look if you are in the area.

A timetable for the service can be seen at https://www.adelaidemetro.com.au/timetables/trains Select OUTHA for the Outer Harbor line.

On weekdays trains run every 30 minutes (slightly less late evening and very early morning). First train 5.20 am and the last, the following morning at 1am from Outer Harbor (from Adelaide 40 mins earlier). The trip takes 40mins.

Saturdays/Sundays – first train from Outer Harbor – 7am with trains hourly from 7pm, otherwise as per weekdays. 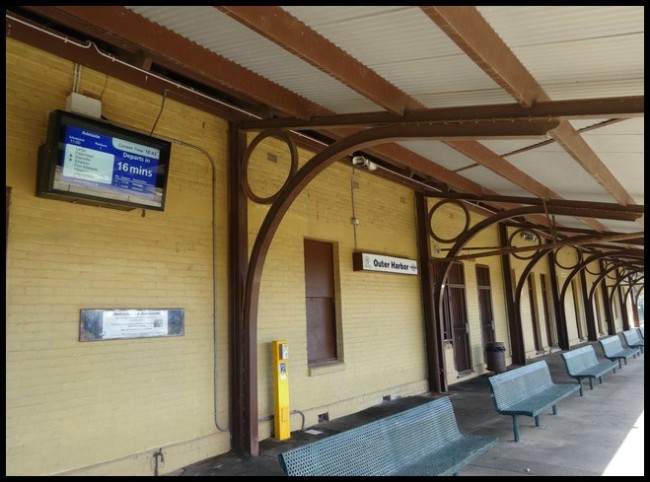 Please be aware that all four stations are unmanned and apart from being wheelchair accessible, having automated train announcements and offering shelter from the weather they offer no other facilities and that includes toilets. Tickets can be purchased from vending machines on the train – the machines accept coins and credit cards but not bank notes. 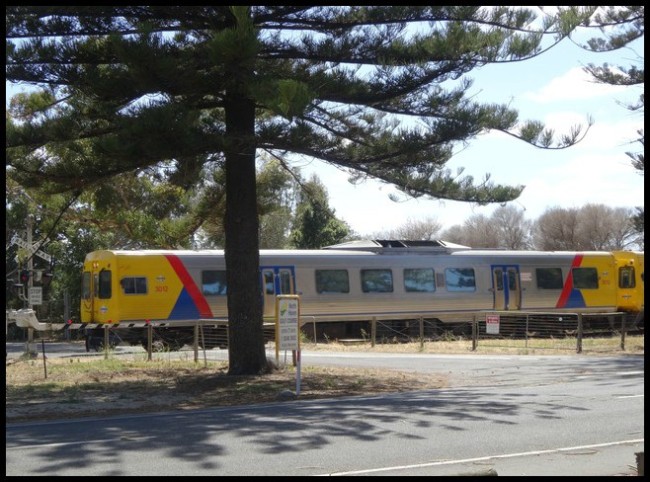 Now to the artwork. 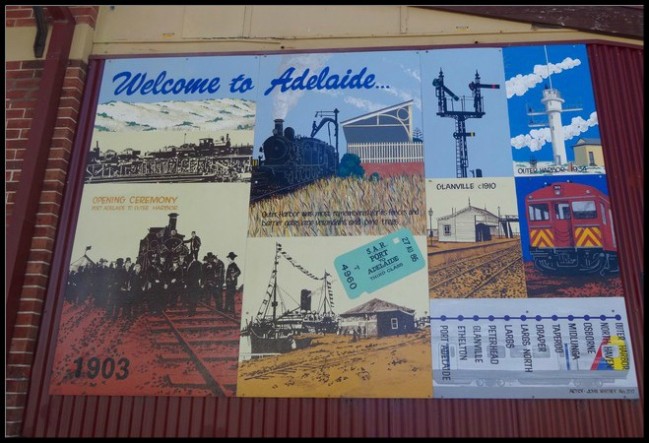 The first piece of artwork, on the exterior wall of the station, is a 2012 collage entitled ‘Catching the Boat Train’ by John Whitney. This depicts some of the history of the area with a focus on the history of the Outer Harbor train line and the special boat trains that used to run to and from this station.

In 1908 Outer Harbor opened to ocean-going shipping which previously anchored at Largs Bay, a short distance down the coast.

A train service to Adelaide commenced at the same time and, until the 1950s, special express boat trains connected with the arrival and departure of ocean-going ships. Indeed, many of the boat trains were shunted onto the wharf to enable passengers to transfer directly to and from their ships.

A significant number of South Australia’s post-World War II immigrants from the United Kingdom and mainland Europe would have taken one of these special boat trains and passed through this modest station en route to Adelaide and beyond.

With the switch to airlines and the consequential decline in people arriving by ship (now limited to those arriving on cruise ships) the last special boat train departed Outer Harbor in 1971. 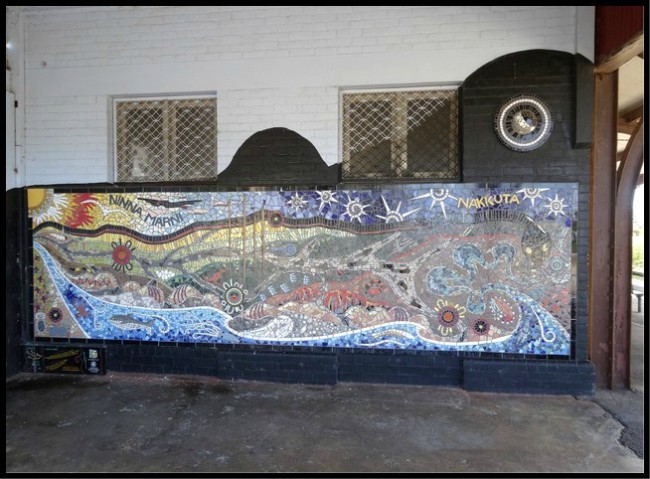 The Kaurna people are the original Aboriginal people of the Adelaide Plains (Kaurna Country) on which the modern city of Adelaide and its beachside suburbs are located. Today the Port Adelaide Enfield council area, which includes Outer Harbor, has one of the highest Aboriginal populations in South Australia, not only Kaurna people but also Narungga and Ngarrindjeri people from Country adjoining Kaurna Country. This mosaic is specifically designed to acknowledge, respect and honour all three groups. 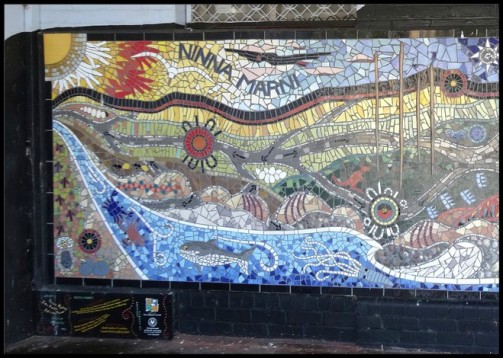 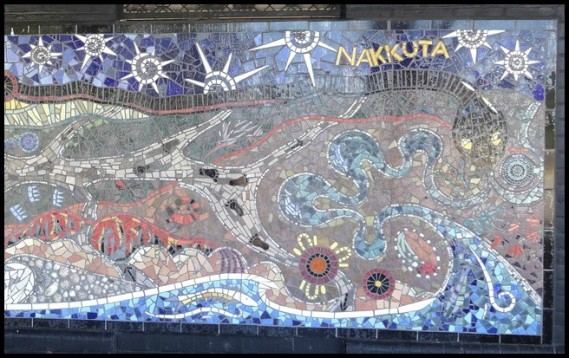 The mosaic, like much Aboriginal artwork, is rich in symbolism which is, thankfully for the visitor, related and explained on a board along side.

One thought on “Outer Harbor Station And Its Artwork”