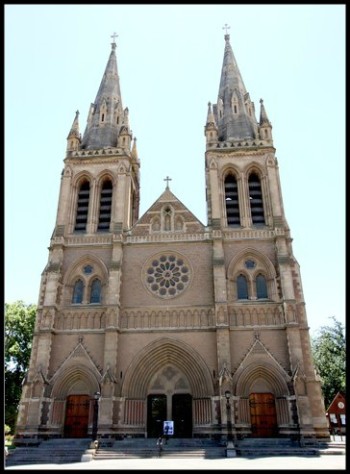 Given its abundance of churches, of all persuasions, Adelaide is frequently referred to as the City of Churches. St Peter’s Cathedral, a landmark on the city’s north side, is the most spectacular of all these churches and has, arguably, the richest history.

The Anglican See of Adelaide was constituted in June 1847 and a grant of land was shortly thereafter given by the Governor for the purposes of building a cathedral. In 1855 the Supreme Court held that the land grant (of public land) was beyond the power of the Governor to grant and as such it was invalid so construction could not proceed. 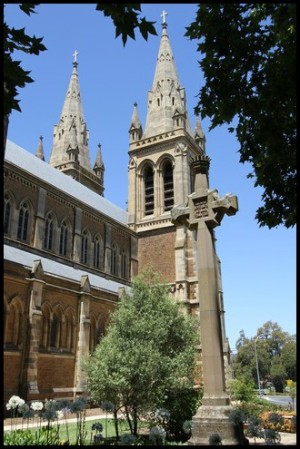 Bishop Short, the first bishop of Adelaide, purchased just over an acre of land, at the corner of King William Road and Pennington Terrace, North Adelaide in 1886. Piecemeal building began, in 1869 and the first part of St Peter’s Cathedral was consecrated on 1 January 1878. The rest of the current nave was completed by 1901. The towers were completed in 1902 and The Lady Chapel was completed in 1904. The last section to be completed was the front steps in 1911. The front of the building is believed to have been modelled on the front of the Church of St Jean-Baptise de Belleville in Paris which itself has many similarities with Notre Dame de Paris. An interesting pictorial history of the cathedral’s construction can be seen in the passage to the northern side of the Chancel.

While many of the windows were made in England, two of the earliest windows, the Rose Window in the eastern wall and the window of Edward the Confessor were made in Adelaide. The lower windows in the Nave depict contributors to the English Church from early times up to 19th century martyrs.

A Self guide tour by a free booklet is available in a number of languages – make sure you pick one up at the back of the church on entry it contains a lots of good information and points you to things like a piece of Westminster Abbey (London) masonry which you would otherwise most likely miss.

Address: Crn King William Road and Pennington Terrace
Directions: A short walk up King William Road from the city. As you cross the River Torrens you cantt miss the cathedral looming ahead.
Website: http://www.stpeters-cathedral.org.au/

This is my last Adelaide – NORTH ADELAIDE review.
For other Adelaide reviews click HERE.