While whether Bullocky Bill’s dog ‘sat on’ or ‘shat in’ his tuckerbox here at Five Mile Creek or at Nine Mile Creek is a matter of debate what is for real is that Five Mile Creek has long been an important rest stop for travellers. In the early 1800s it was a base and rest stop for pioneers making their way further into the then unexplored interior of Australia. Today it is a favourite rest stop for the modern traveller traversing the south-east tip of Australia via the 840 kms long Hume Highway which links Australia’s two largest cities, Sydney and Melbourne.

While there are numerous rest stops en route between Sydney and Melbourne this one is approximately half way (386 kms from Sydney) and is distinguished by the presence of the Dog on the Tuckerbox monument – derived from the Bullocky Bill story.

Having viewed the Dog on the Tuckerbox monument do have a wander around the small adjacent park area.

Near the monument you will find the remains of the old Five Mile pub opened as the Limestone Inn in 1858 by Joseph and Rosannah Carberry (both of Irish extraction) to cater principally, via its 12 rooms of accommodation, for passing trade on the old Sydney-Melbourne road (opened in 1836) which, like today’s Hume Highway, passed by the Inn. In the 1860s the Inn prospered from gold prospectors as the area was briefly caught up in the goldrush which hit many parts of Australia at that time. A large number of locals also frequented the Inn attracted, not least, by Rosannah’s adeptness on the pianoforte. 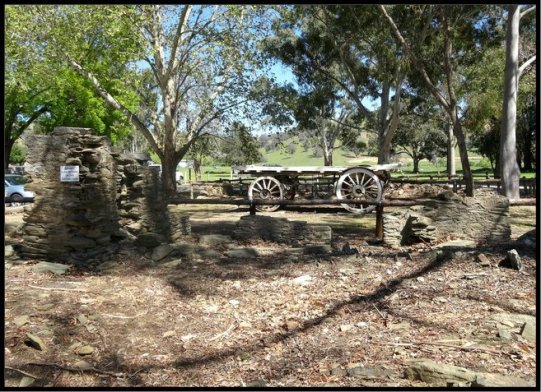 In April 1861 less welcome visitors – bushranger ‘Jack-in-the-boots’ and his accomplice dropped in and relieved patrons and staff of all their money prior to moving on.

After this the Carberry’s renamed the Inn, the Australian Arms, before divesting of their interest in it. A number of subsequent licensees operated the business as the Squatters Arms before it finally closed in 1876.

While not much of the former inn remains, it is one of the few surviving examples of numerous similar establishments, which sprang up along the Sydney-Melbourne road in the latter half of the nineteenth century.

Over time and notwithstanding a bit of farming and viticulture the importance and fortunes of the area declined, only to be revitalised in the 1930’s following the erection of the Dog on the Tuckerbox monument. 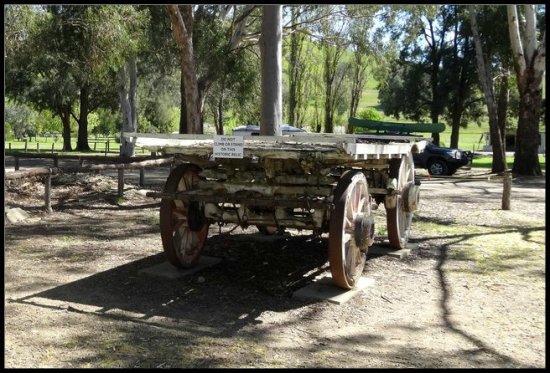 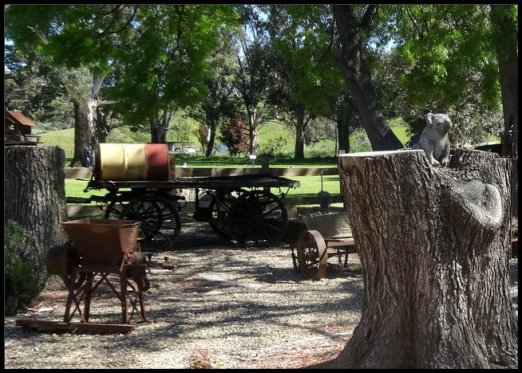 Scattered around you will also see various items of old farming equipment and a couple of bullock carts similar to those used by early pioneers. While well known for their ability to sit still, the koala on the tree stump (final picture) isn’t real, lest you become intent on waiting on it to move!

The adjacent large lawn area is a great spot for a picnic or a spot of impromptu footy (football of any type) or cricket to stretch your car weary legs.

Address: Five Mile Creek, Gundagai
Directions: Just of the Hume Highway on the Sydney side of Gundagai – well signed posted (Dog on Tuckerbox) as is the nearby modern service station.