I have driven past this very distinctive round-topped building for a number of years now and apart from knowing it was a church I knew very little else about it. While visiting a couple of other sites in the area – Mugga Mugga and Calthorpes’ House – I decided to stop for a closer look.

It is Canberra’s Macedonian Orthodox Cathedral, dedicated to St Kliment of Ohrid and opened in 1988. The cathedral was designed by Macedonian Australian, Vlase Nikoleski.

Both the Cathedral (though functioning) and the block on which it is located have a rather rundown feel. This is undoubtedly related to a long and ongoing legal issue with the ACT Government. While the Church seeks to develop the block – including part there-of for residential purposes – the courts have ruled this can only occur after a significant re-zoning fee (some $2-3 million) has been paid. Local residents have also raised objections to the proposed redevelopment. 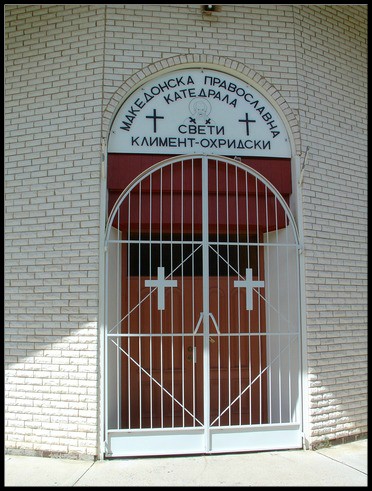 Most Macedonian Australians are of the Orthodox Christian faith and this Cathedral serves the spiritual needs of Queanbeyan and Canberra Macedonians. The first Macedonians to arrive in this area came in 1920s and 1930s and established market gardens or became eucalypt cutters. Larger numbers of (Aegean) Macedonians came to the region after World War II and the Greek Civil War.

I have been unable to ascertain when services are held in the Cathedral or if / when it is open to the general public. An interesting stop nonetheless if you are in the area.