Government House – The GG’s Pad – From a Distance

By way of an amusing diversion, if I may, His Excellency was one of three people to be made a knight or dame in 2014, following the honour’s reintroduction into Australia by monarchist Prime Minister, Tony Abbot, nearly three decades after it was abolished by the Hawke Labor government. The other two honour recipients were HRH Prince Philip and the then outgoing Governor-General, Quentin Bryce. Within months Abbot was ousted in an internal coup and one of the first acts of his successor, Malcolm Turnbull, was to abolish the honour again. The three recipients retained their titles. Talking of coups (non-violent – I should add), while few readers may have noticed, Australia has had five Prime Ministers in the same number of years – three gaining office through internal party coups.

Back to Government House. The current building, or rather the core there-of, replaced a stone hunting lodge built in 1833. Lest this may instil visions, in the mind of my reader, of big game hunting as in Africa, hunting here in Canberra was on a more modest scale. The owner, Francis Mowatt of the Customs Department, hunted kangaroos and dingoes with a pack of fox-hounds he had brought out from England.

The core of the current building dates from 1891 starting life as a three story red brick homestead built by Frederick Campbell who owned the 40,000 acre (16,000 hectare) Yarralumla grazing property. The Campbell family first moved to Canberra from Sydney in 1823 when Frederick’s grandfather, Robert, secured the first pastoral lease here as compensation for the loss of his ship, sent to Batavia (Indonesia) to obtain food for the then fledgling and starving Sydney.

As stated elsewhere in my entries, when Canberra was chosen as the capital of the newly federated Commonwealth of Australia in 1909 the Australia Capital Territory was carved out of the State of New South Wales and all property therein became leasehold, reverting to the Crown. In this process the wealthy Campbell family fared badly – though compensation was paid. The family lost this property, among others, in 1913.

While the intent was to develop the new capital immediately, WWI intervened and little happened. Government effort, and indeed the Yarralumla property itself, was diverted to the war effort. Post-war the Yarralumla homestead, with 54 hectares of lawns, gardens and parklands was chosen as a temporary residence for the Governor-General, previous Governors-General having lived in Sydney or Melbourne.

The house’s first royal guests were the Duke and Duchess of York (later King George VI and Queen Elizabeth, the Queen’s Mother) when they came to open Parliament House (now Old Parliament House) in May 1927. Prior to this the first Australian Government Cabinet meeting to be held in Canberra was held here on 30 January 1924.

Rumour has it that a large diamond stolen from an outback Queensland (cattle) station in 1826 lies buried within the remains of a ‘blackfellow’ under an old deodar cedar tree in front of the building. Supposedly, some years after its theft the convict accused of stealing it passed on details of its location to a groom. After the groom’s death, his son, with this indigenous servant (blackfellow – to use the then popular though now derogatory non pc term), set about recovering the diamond. On their return to Sydney with the diamond they were ambushed by bushrangers and separated. The blackfellow was shot by the bushrangers and later buried under a tree at Yarralumla by local Aboriginals. No-one realised that he had swallowed the diamond to prevent its capture.

While treasure hunts have occasionally been held at Government House, the area around the old deodar cedar has always been of bounds and to this day the ground around the tree remains unmoved, or so we are lead to believe.

Walter Burley Griffin, who designed the new city of Canberra had envisioned a very grand Government House in the Parliamentary area but this never eventuated and the temporary Government House became permanent. Over the years various additions and improvements have been made to Government House such that it now bears no resemblance to Campbell’s 1891 red brick house though, no longer red, it does remain as the core of the building.

Today in addition to being home and office of the Governor-General, Government House is used for receptions, investiture and credential ceremonies, state dinners, digs for visiting royalty and heads of state and various community functions. 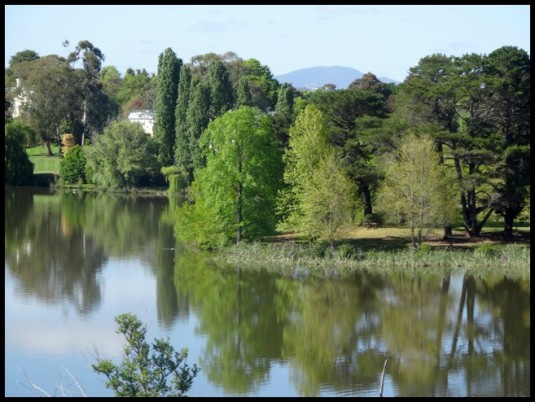 Given this, it, or actually part of it, is only open to the public on special open days, a couple of times per year. While I have been of a mind to visit the house on several occasions it seems to only be open when the GG (an affectionate term for the Governor –General) and myself are out of town – albeit on separate business! When I eventually get in (or am invited in) I will write a separate review from the inside, as it were.

If you are not in town on one of the open days you can still get a decent view of Government House from a lookout on Lady Denman Drive (a short distance from Scrivener Dam). The view from here is across nicely manicured lawns on which you may be lucky enough to see a kangaroo or two grazing (best chance early morning or in the evening). How Australian is that?

Coincidentally I cycled past Government House the morning I wrote this review and noticed about 20 kangaroos lying in the grounds to the east of the house. 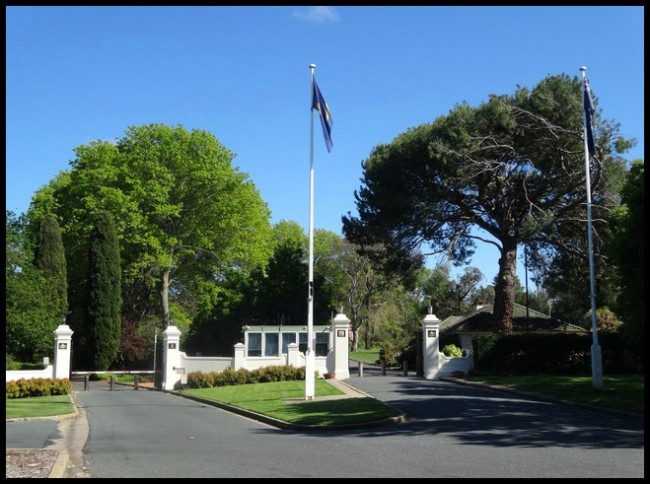 The official entrance to Government House is on Dunrossil Drive. While you can admire the property’s iron gates, decorated with the Royal (British) and Commonwealth of Australia coats of arms, the Governor-General’s cipher and a gatekeeper’s cottage you cannot see Government House itself so best to head of the look-out on Lady Denman Drive.