In my review of the former East End Market, I related that it had outgrown its site by 1900 by which time William Charlick, proprietor of a fruit, potato and grocery store within the market area, had acquired the adjacent large block of land between Rundle and Grenfell Streets.

Charlick attempted to do a deal with the East End Market Co Ltd such that it extend its market onto his land, to his gain of course. Negotiations failed and Charlick with the support of various growers, merchants and the City Council sought leave (an Act of the Colony Parliament was required) to set up his own market of 4 acres in area. He got permission, though the Council was given an option to take the market over at its market value at any time in the future (an option it never exercised), and the Adelaide Fruit and Produce Exchange (most commonly referred to as the New Market) opened for business on 2 May 1904.

By 1910 the New Market had 390 stalls, 20 large packing stores, 11 small stores, a refreshment room and a blacksmiths and was one of the most modern and best equipped markets in Australia at the time.

The two East End markets soon reached full capacity, growing as Adelaide grew, and by the 1960s there were calls to relocate both markets which had outgrown their sites and spilt out into the surrounding streets which became gridlocked on market days. The end was nigh, but bureaucracy, as it often does, got in the way and it wasn’t until Friday 30th September 1988 that both the Adelaide Fruit and Produce Exchange and the East End Market closed for good in the east end, to reopen, three days later, on Monday 3rd October as The Adelaide Produce Market in the northern suburb of Pooraka.

While the old market area remained vacant for some time it has since been fully developed with higher end apartments, restaurants, offices and boutique shops replacing market stalls and stores. In terms of the original market, all that remains are its ornate decorative facades and ground floor shop-fronts, designed by architect, Henry J. Cowell, with ornate gables and cornucopia motifs, all providing a very distinctive streetscape along East Terrace, Grenfell Street (pictures 1 – 3 attached) and Union Street (the least decorative).

The ornate and indeed decadent facades can be attributed to the air and feeling of optimism in Australia at the time – just after the 1890s depression and Federation in 1901 but before WWI. The Biblical inscription on the Grenfell Street frontage (picture 2) expressed the moral virtue to which the exchange aspired: “The Earth is the Lord’s and the fulness [sic] thereof” (Psalm 24:1). Perhaps it was a direct message to the ‘fallen women and girls in the East End Market’ that this market was above the ‘brazen conduct and imprudent profligacy’ complained about at the East End Market (see my East End Market review). 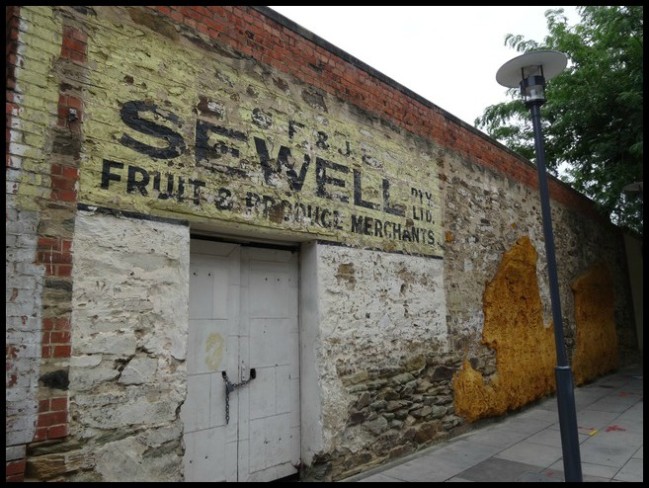 The painted (though flaking) wall and storeroom in picture 4 is the only evidence that I came across to confirm that real businesses once operated behind the ornate facades we can see today.

In the centre of the old market area, in front of the Oostende bar, is a sculpture entitled, The Apron, by sculptor Karen Genoff. The sculpture is a reflective piece on the old East End markets. Its centrepiece is a bronze reconstruction of an old market apron – a metaphor for ‘the end of the working day’ and the markets closure.