Where can we put that, without causing offence? 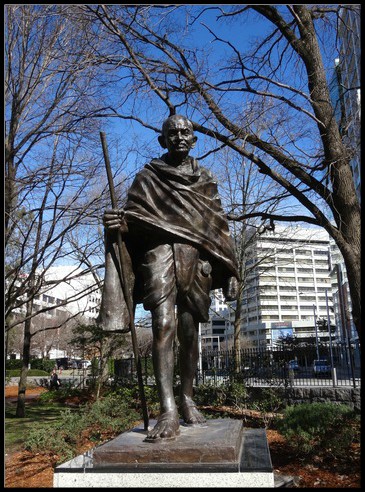 Being a capital city, albeit a small one of only 400,000 people, Canberra is host to nearly 80 Embassies and High Commissions in addition to numerous other international organisations, foundations, philanthropic organisations and the like.

The one thing all these erstwhile institutions have in common is that they like to bestow gifts on their hosts, all with good and noble intent, naturally. Many of these gifts take the form of statues and works of art which have to be displayed somewhere.

A few of these gifts, for no particular reason that I can ascertain, have ended up in Glebe Park. This makes me wonder if, when contemplating the display location of each gift, some official scratches his or her head and wonders ‘Gee where can we put that, without causing offence?’

Having so wondered, I am sure all gifts are gratefully received and it is indeed a great pleasure for our officials to judicially place them in an appropriate place.

I have digressed somewhat.

Having extolled the virtues of visiting the park in my separate review – Glebe Park -Ye Olde English Park in Civic – a look at the statuary and artwork therein is also worthy a little of your time.

The bronze statue of Gandhi (pictured above) was funded by the local Indian community, very intricately sculpted by Ram V. Sutar and dedicated by the then Governor General, the Reverend Dr Peter Hollingworth in 2002. The statue is a tribute to Gandhi, the ‘apostle of non violence (Ahisma) and truth (Satyagrah)’.

A plaque on the sculpture lists Gandhi’s guidelines on various aspects of life including, ‘no politics without principles; no wealth without work; no commerce without morality; no pleasure without conscience and no science without humanity.’

The World Peace Flame Monument (picture 2), a 2001 donation from the Life Foundation, depicts the wish of the foundation, ‘May all beings be at peace”, and invites visitors to walk around the monument and make their own wish. While I wholeheartedly agree with sentiment expressed, the monument in itself did little to excite me.

The nearby, and rather more appealing, bronze statue of Elge – the Queen of Serpents, by Ieva Pocius, was presented to Australia by the Lithuanian community as a bicentennial gift in 1988, (pictures 3-4). 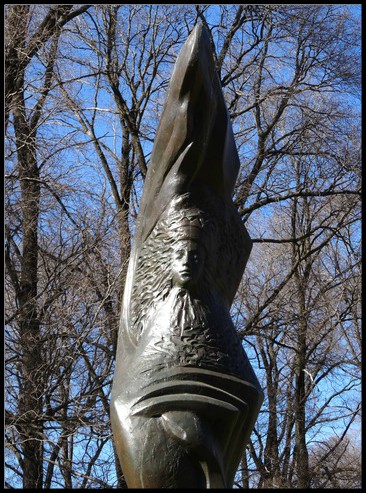 According to the Lithuanian folk tale, a young girl, Egle, became entrapped by serpents and ended up marrying Zilvinas – the handsome human Serpent Prince – with whom she then lived happily and in great luxury at the bottom of the sea. Eventually she became homesick and wanted to visit her family. Zilvinas denied this wish until she completed three impossible tasks he had set her. With the assistance of a sorceress, Elge completed the tasks. When she then visited her family, her brothers did not want her to go back to Zilvinas so they summoned him from the sea and killed him. When Elge discovered that she had lost her beloved husband and her underwater kingdom, as punishment for her brothers’ betrayal, she turned herself and her children into trees – herself a spruce.

While I rarely understand what the artist is getting at when it comes to modern art and abstract sculptures I am finding both more palatable with advancing years. This may just be an indication of insanity taking a grip of me but, that be as it is, I found this piece of art, ‘Glebe 2002’ by Hew Chee Fong and L.M.Noonan (picture 5), pleasant enough to hold my attention for a couple of minutes.

It comprises a single block of granite, segmented to represent the sub-division of the original glebe allotment (see my main Glebe Park review). Each part then respectively represents the church, reflection/contemplation and time. Why the latter two? Who knows!

7am -10pm during daylight saving and until 8pm during other months.

Address: Intersection Bunda St and Akuna Street There are other entrances too, Canberra
Directions: Less than 5 minutes walk from Civic – via Bunda Street