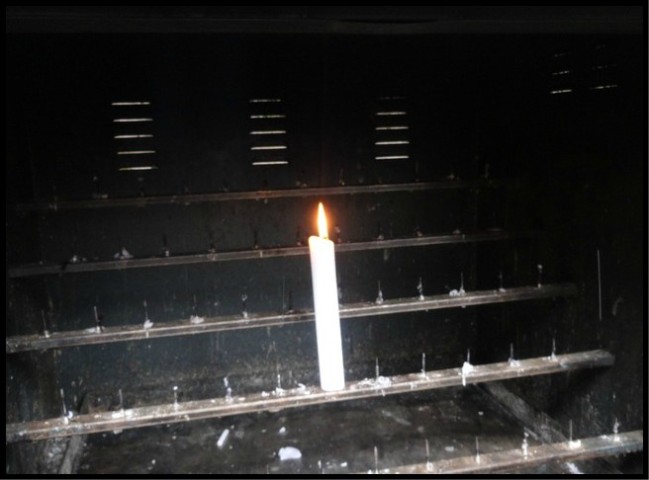 Having made our way along the sacred path, lined with tombstones and stone lanterns (many moss covered) and tall cedar trees, for almost two kilometres from Ichinohashi Bridge through the Okunoin Cemetery we arrived at the Gobyonohashi Bridge.

Crossing this bridge brought us into the most sacred part of Okunoin, an area where photography, eating and drinking is prohibited – a very holy place for the Japanese.

The first building we encountered was the the stunning Toro-do or Lantern Hall where 10,000 permanently lighted lanterns hang, donated by the faithful in memory of their departed loved ones. The gold coloured lanterns and yellow glow in this room was a sight to behold. As we looked around in amazement we did so to the melodic chants of golden robed monks going about their business. Two of the lanterns here are said to have burned continuously since 1088, one donated by the former Emperor Shirakawa and the other by an anonymous penniless peasant women who sold her hair to buy the lantern so that she could pray for her late parents. You too can dedicate a lantern to someone, but this comes at a cost of between Y500,000 and Y1,000,000.

Leaving the Lantern Hall and passing by the Miroko-ishi stone, which I have written about in a separate review, we entered one of the most atmospheric temples I have ever been in. Listening to monks softly chanting in the low light of this temple was truly amazing. We were invited to, and did, sit down to relax and reflect for a while before making our way round to the rear verandah of the temple to see Kobo Diashi’s simple cave/mausoleum – the Gobyo.

It was in this cave, now sheltered by lofty cedar trees, that Kobo Daishi, performed the ultimate of penitent training in which he practised austerity to the point of death. It is here that he still rests in eternal meditation awaiting the arrival of Miroku Nyorai (Maihreya), the Buddha of the Future. On this Buddha’s arrival, the former monk Kukai looks forward to salvation and entry to Nirvana, as do his followers buried in, or memorialised in, the Okunoin Cemetery. 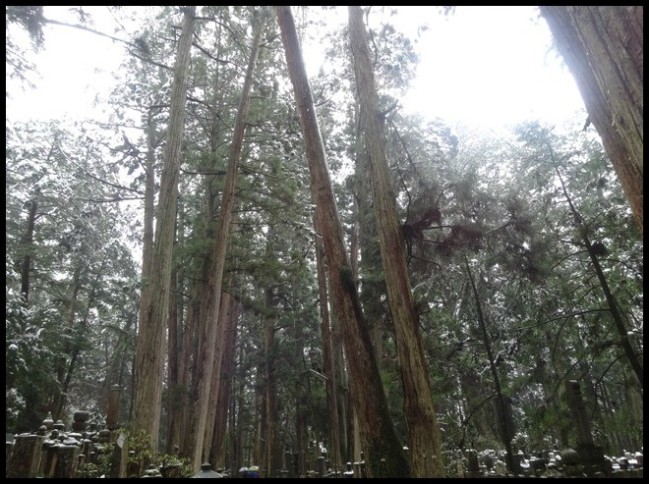 When arrived onto the vernadah we joined a large number of monks and lay people assembled before the Gobyo, some in silent reflection and others reciting sutras in low voices. Absolute peace and calm pervaded. By chance, we found ourselves witnessing the 10.30am ritualistic offering of food to the resting Kobo Daishi. He is ‘fed’ daily at 6.00am and 10.30am. The monk in my picture below is returning to the Gokusho Offering Hall after visiting the shrine.

More lanterns, though less ornate than those in the main hall, decorate the veranda while gorgeous metal gilded flowers line the short (non accessible) path up to the Gobyo. Also around here, in the temple basement and worthy a look, is a large room where we found, on shelf after shelf, 50,000 identical small statues of a smiling Buddha. These were donated to Okunoin on the occasion of the 1,150th anniversary of Kobo Daishi’s entrance into eternal meditation in 835.

All in all, the most amazing of experiences and while I would have liked to have some photos, taking them would have been a major act of irreverence and would have taken away from the magical experience. It is proper that photography is prohibited is this sacred area.

Okunoin is free to enter and open at all hours. The main cemetery entrance, via Ichinohashi bridge, is about 15 minutes walk from the town centre (tourist office) or a short bus ride (during daytime only). From here it is a 2km walk to Kobo-Daishi’s mausoleum.

For my next KOYASAN review click HERE.
To start reading at the beginning of my Koyasan reviews click HERE.

2 thoughts on “Okunoin – The Inner Sanctum”