The vast majority of the many temples in Koyasan are square or rectangular in shape, dark coloured (with the notable exception of the Konpon Daito Pagoda in the Danjo Garan) and have some form of courtyard. As such the brightly coloured octagonal Jufuku-in Pagoda Temple (Manihoto) by the side of the town’s main street really stood out as I made my way from Okunoin Cemetery towards the Garan.

The other thing that makes this temple stand out is the dearth of information that I could find on it and the fact that, despite its peculiarity among the town’s temples, it does not feature in tourist literature (save for the fact that its lodgings are advertised). I suspect the reason for this lies in its World War II history. Personally I feel history is history and should not be hidden though I understand modern Japan’s reticence in actively promoting anything with links to that War lest it be seen as condoning things it now otherwise wishes to leave behind. Others see the reticence as Japan not wishing own up to, or acknowledge, its aggressive past. 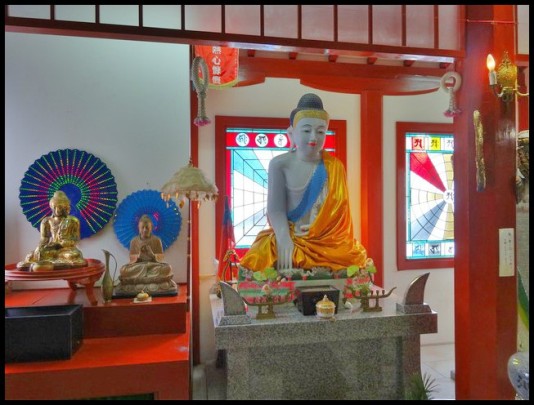 Juguku-in, otherwise known as the Burma War Veterans Memorial is a requiem honouring Japanese Imperial soldiers who died in Japan’s ‘liberation’ of Burma from Western imperialism, in World War II. A small display of military uniforms and other wartime memorabilia including a small photographic exhibition within the temple reminds the visitor of this role.

From the time of its introduction to Japan, by the monk Kukai, in the early ninth century, Shingon Buddhism has cast itself in the role of “spiritual protector of the state” (chingo kokka). This is, of course, no different than religious orders elsewhere in the world so it came as no shock to me that links to the Japanese military, including many war memorials in the Okunion cemetery, should exist in Koyasan, the centre of Shingon Buddhism.

The Juguku-in temple was built by a monk who went to Burma to study Burmese Buddhism so this accounts for its distinct south-east Asian architectural style, the bright colours of the temple and the preponderance of typically south-east Asian Buddha statues and other artefacts, including two beautiful Buddha footprints found in the temple today.

Aside from this strong south-east Asian influence in the temple, what I found most intriguing was a short subterranean tunnel/ passageway. I am not sure what enticed me down for a look – but down I went. There must have been an arrow, as while there were lots of written explanations, etc in the temple none of it was in English.

Using the light from a mobile phone, as the passageway was in total darkness, I could discern that along it were niches containing deities, icons and what had all the appearances of two miniature terracotta warriors – one at each end of the passageway, perhaps guarding the other icons.

Entry to the temple is free. When visiting walk around in an anti-clockwise direction.

For my next KOYASAN review click HERE.
To start reading at the beginning of my Koyasan reviews click HERE.