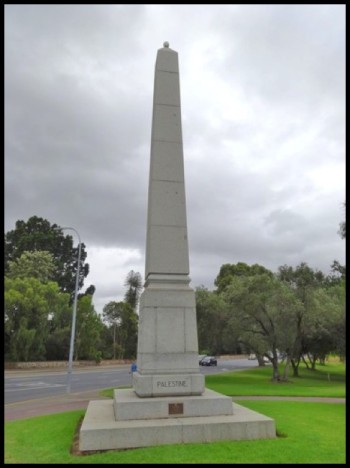 The Light Horse Memorial is dedicated to South Australian Light Horsemen who paid the supreme sacrifice in World War I, specifically in three theatres of war – Egypt, Palestine and Gallipoli.

Australia’s Light Horsemen (mounted infantry, as distinct from cavalry) had previously served with distinction in the Second South African (Boer) War of 1899–1902. In WWI  two regiments, the 3rd and 9th Light Horse Regiments and a squadron of the 11th Light Horse Regiment represented South Australia. At Gallipoli the Light Horsemen served dismounted (including in the bayonet charge at ‘The Nek’ on 17 August 1915). In Egypt they served as part of the ‘Desert Column’ against Turkey and in Palestine, in 1917 cavalry charge at Beersheba. 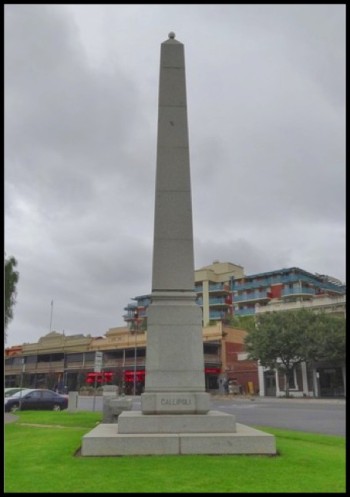 The original intent was that the memorial be a bronze horse and rider but funding proved difficult to secure and a granite pyramid was proposed – ‘for it was to the pyramids that the men first went, and then on to Palestine’. Ultimately the 11 metres high grey Harcourt Victorian granite obelisk, styled on ancient Egyptian columns, that one sees today was settled upon.

Look up and you will note a light on the apex of the memorial – this used to be lit from sunrise to sunset as a sign that the dead are not forgotten day or night – or in Laurence Binyon’s famous lines (quoted on the monument): – ‘At the going down of the sun, and in the morning, We will remember them’.

The Light Horse Memorial obelisk cost £1200 excluding the light which the organising committee could not afford. The Adelaide City Council came to the rescue and the light was installed. It is rather sad the same Council (which now maintains the Memorial) cannot extend itself to donating the electricity necessary to operate the light.

The Memorial was unveiled by Governor Bridges on 5 April 1925.

In 1995 a small rectangular granite memorial and Cyprus plane tree were respectively erected and planted close by ‘to commemorate the service of those members of the Royal Australian Armoured Corps who, as successors to the Light Horse Regiments, served in WWII 1939-1945’.