In 1840, not long after the founding of the State of South Australia, Henry Ayers arrived from England intent on making his fortune in the new colony.

Ayers certainly made his fortune in Adelaide and during his life there he held countless positions not least of which included Premier of the State (7 times), State Cabinet Minister (11 times), Governor of the Botanic Gardens Board, founder of the Bank of Adelaide, Chairman of the Adelaide Gas Company, director of the Burra Copper Mine (the most lucrative position, I suspect) and treasurer of the University of Adelaide. In 1872 he was knighted for his role in bringing the overland telegraph service from Darwin to Adelaide and thus opening up communication with the Motherland, England.

His grand colonial Regency/Victorian mansion, built in 1876, was designed by Sir George Strickland Kingston (architect to the well healed in Adelaide) and inspired by the work of Robert Kerr a leading English architect of the day, whose book “The English Gentleman’s House” gave the ‘New Rich’, like Ayers, clear direction on how to live and entertain like a gentleman.

Ayers’ good lady wife certainly knew how to throw a party and the Ayers’ twice yearly parties in September and October were the talk of the town and the place to be.

After Ayers’ death in 1897 the house stood vacant until bought by Austral Gardens Limited which turned the grounds into an open air theatre (and a rather stylish one at that –  picture courtesy of the State Library of South Australia) and adjoining Palais de Dance. 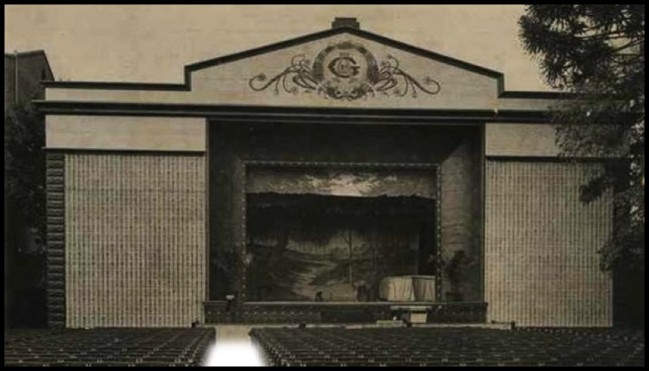 The house was occupied by the Returned Soldiers League with “A member of the Executive in attendance to assist Members in their difficulties every Evening” according to the RSL Magazine (Sept 1918). From 1929 to 1969 it was a nurses home and training centre for the Royal Adelaide Hospital which you may notice across North Terrace from the House.

After this the then State Premier, the rather flamboyant Don Dunstan, set about returning it to party central. After a refurbishment it reopened in 1973 as a fine dining restaurant. With clientele like Her Royal Highness, The Princess Anne and Her Majesty, Queen Elizabeth II it quickly became the place to be seen again.

Today the main part of Ayers House is a stylish function centre catering for weddings, business functions and the like. It no longer operates as a restaurant for the general public

Public entry is now via means of a tour – which I have not partaken of yet. Ghost tours and (perish the thought) after dark dress-up tours – I think it’s the staff and not the tourists that dress up – are also available, though must be booked in advance through the Ayers House Historical Museum, managed by the National Trust. The latter is a good thing if you are a member as you get free access on the basic tour.

And yes, Ayers Rock (now officially called Uluru) in the centre of Australia was named after Sir Henry Ayers.