Nowadays we regularly read of the antics of the younger British Royals as if it were news. Far from it, the royals have always lived it up.

King Edward VII (1841–1910), eldest son of Queen Victoria, in addition to his role as a peacemaker in foreign affairs was a renowned philanderer with a well developed taste for the high life. Even after his marriage to Princess Alexandra of Denmark in 1863, Edward persisted with his luxurious lifestyle and had a series of long-term mistresses, including actress Lily Langtree. Well, I guess this was one way of keeping himself occupied as he waited (60 years) on his turn to be King. Interestingly, the current Prince of Wales, Prince Charles is in his late 60s as I write this review.

Given Edward’s fondness for the ladies, I find it rather amusing that a Government of South Australia website describes this memorial statue as comprising ‘a cast bronze statue of King Edward VII standing erect in full coronation regalia.’ I wonder if the King’s affliction is due to the presence of the three scantly clad damsels at the base of the statue’s pedestal? 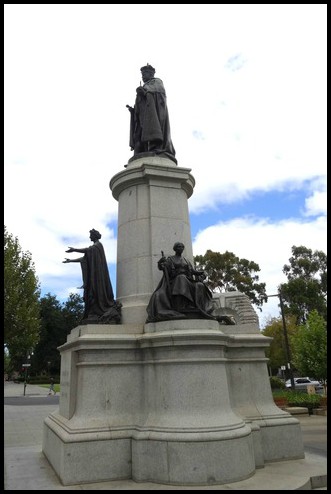 The memorial statue was sculpted and the pedestal designed by Sir Bertram Mackennel, the first Australian sculptor to be elected to the Royal Academy in London.

Conceived in 1910 at the first meeting of the Adelaide City Council after Edward VII’s death and paid for by public subscription, the statue was not unveiled until 1920. 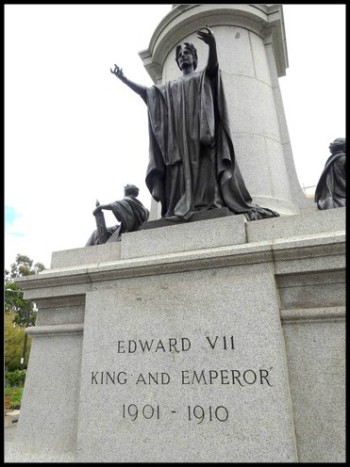 The first reason for the delay was a protracted and heated dispute between Mackennel and the design committee which actually resulted in work coming to a standstill in 1913. Mackennel first cast the King in field marshal attire. The committee demanded a more regal appearance necessitating a recasting – in full coronation regalia. Having agreed that the King would be accompanied by two smaller figures representing Peace and Justice the committee then requested a third, ‘ South Australia’ – standing with her arms outstretched welcoming the world. Mackennel refused to make this change to his work and only acceded to the rather peculiar addition after much persuasion and on the agreement that he be paid and extra £250.

Having agreed on everything in 1915, World War I intervened and work was again delayed as memorial statues, even those of ex-kings, were demoted in importance as foundries shifted to war production. 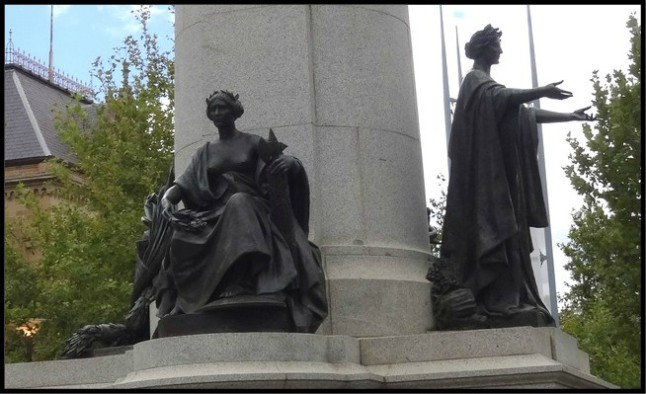 The unveiling, in front of what was described as one of the largest crowds Adelaide had ever seen, was by the Prince of Wales, later King Edward VIII, in a hastily arranged ceremony coinciding with his visit to Australia for other reasons.

Perhaps given the lengthy delay in getting the statue completed, the Prince did not want to deny the good and patient people of Adelaide their memorial statue one second longer than necessary. Lord Mayor, Frank Boulden spoke briefly before the Prince hurried up the stairs, said ‘Thank you’ and unveiled the statue of his grandfather. The whole ceremony took all of ten minutes.