Migration into Australia has been, and continues to be, an emotive topic for many.

A brief history of migration to Australia

Migration to Australia began around 50,000 years ago when the ancestors of Australian Aborigines arrived on the continent via the islands of Maritime Southeast Asia and New Guinea.

In terms of migration from other sources not much happened for the next 49,800 years. European sorties in the form of coastal landings began in the 17th Century and in 1788 permanent European settlement began with the establishment of the British Crown Colony of New South Wales. Having lost the United States, Britain needed a new penal colony to which it could dispatch its undesirables – the convicts. From about 1815, due to pressures exerted by free settlers who began arriving in increasing numbers from Britain and Ireland (sparked by the rapid expansion of the Australian wool industry) convict arrivals were phased out. South Australia, with Adelaide founded in 1839, had no convict settlers.

The commencement of the 1851 Gold Rush saw a significant increase in arrivals – this time from not only Britain but also from other European countries, North America and China. The next decade saw the population of Australia rise from 400,000 to around 1.1million. The remaining decades of the 19th century saw subsidised or assisted passages offered to incoming migrants.

Resistance to Chinese and other non-European immigration began in the 1890’s leading to the adoption of the Immigration Restriction Act 1901, which has in later years been dubbed, The White Australia Policy , which basically excluded all non-European people from immigrating into Australia – one control mechanism being a dictation test in a European language selected by the immigration officer.

This policy remained in placed to the 1950s, and elements of the policy survived until the 1970s. Post World War Two European immigration was stepped up – a safeguard against another Japanese invasion. Minister of Immigration Arthur Calwell stated in 1947, “We have 25 years at most to populate this country before the yellow races are down on us”. Prime Minister Ben Chifley declared, ‘a powerful enemy looked hungrily toward Australia. In tomorrow’s gun flash that threat could come again. We must populate Australia as rapidly as we can before someone else decides to populate it for us.’ Calwell expressed a preference as to who should populate Australia by declaring, ‘It is my hope that for every foreign migrant there will be 10 people from the United Kingdom’ – essentially Australia must be kept British. Approximately 3 million Europeans settled in Australia between 1945 and the 1960s. This included 1 million British Subjects who arrived under the Assisted Migration Scheme, and who colloquially became known as Ten Pound Poms.

In the 1970s Australia embraced a policy of multiculturalism. The Australian Citizenship Act of 1973 declared that all migrants were to be accorded equal treatment and in that decade and the next 120,000 South Asian refugees settled in Australia. This new multicultural approach and economic and humanitarian events around the world (the Vietnam War and the fall of Saigon, the takeover of East Timor by Indonesia, the increase in brutal dictatorships in Latin America and many others) triggered significant economic and refugee migration to Australia. In 1975 the first boat people arrived in Darwin – 40 years later boats were still arriving.

The issue of immigration remains a political hot potato. In August 1988, John Howard, then opposition leader, launched the One Australia policy , stating that he believed the rate of Asian immigration into Australia should be slowed down for the sake of social cohesion. In 1996 Pauline Hanson was elected to the federal seat of Oxley. In her maiden speech in Parliament she expressed her concern that Australia “was in danger of being swamped by Asians”.

More recent world events in the Middle East and Africa have shifted the focus on Asian immigration to this new arena. Opponents remain as virulent in their opposition.

Irrespective of why or from where they came, the Migration Museum promotes the preservation, understanding and enjoyment of South Australia’s diverse cultures through letting visitors discover the evolving story of migration to South Australia from colonial times to the present day.

The exhibits and displays relay the stories of immigrants’ courage, heartbreaks, struggles and successes. The story is told through sight and sound to reveal: the early settlers in the 19th century and their impact on Indigenous Australians; post-war migrants and the ‘ten pound Poms’; the White Australia Policy of the 20th century; refugees, asylum seekers and the multicultural debate of recent years.

Many of the stories are heart wrenching and gaining an awareness of why people came to Australia, their often horrific stories, and learning about who and what they had to leave behind can only be a good thing. In the main people came to Australia (some voluntarily, many not) seeking a better life for themselves and their families. Some certainly got this but one wonders if sacrifices made lead to dreams fulfilled for everyone. 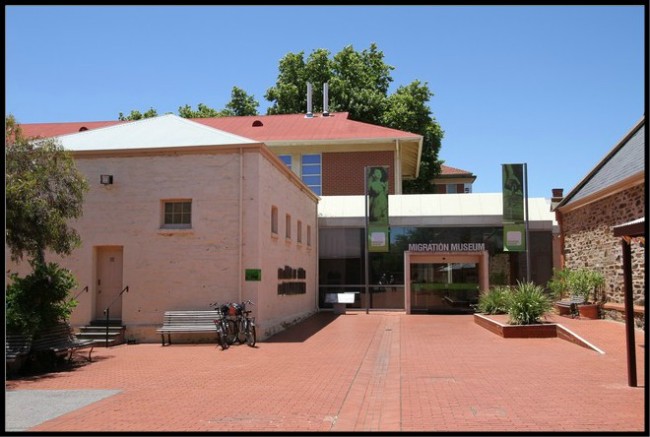 The Museum site was formerly a part of Adelaide’s Destitute Asylum housing the poor and homeless from 1852 until 1918. A display called Behind the Wall tells this often tragic story.

Opening times
The Museum is open daily with the exception of Christmas Day and Good Friday. Opening hours are 10am – 5pm Mon-Fri and weekends and public holidays 1pm to 5pm.

Address: 82 Kintore Avenue, Adelaide
Directions: Located just behind the State Library and the South Australian Museum and can be accessed from the back of either as well as from the main entrance in Kintore Avenue. Kintore Avenue is off North Terrace
Website: http://migration@history.sa.gov.au