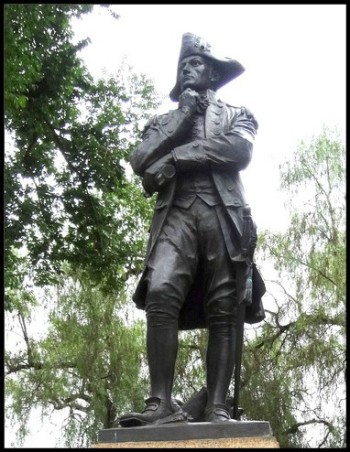 Captain James Cook is most often credited as being the person who discovered Australia, in 1770. In actual fact, Cook claimed the eastern part of the continent for Britain in that year and it was Dutch man, Willem Janszoon, who first landed on the continent on the Cape York Peninsula (in Queensland) and met with Aboriginal people in 1606. It wasn’t until 1803, almost 200 years after this initial European discovery, that someone proved that Australia was an island continent.

That someone was Captain Matthew Flinders (1774-1814), one of the most successful navigators, explorers and cartographers of his age.

His first voyage was as a midshipman on the H.M.S. Reliance, the ship on which the newly appointed governor of New South Wales, Captain John Hunter, came to Australia. Having deposited the Governor in Sydney, he and George Bass, another English sailor and explorer, explored Botany Bay and Norfolk Island before heading back to England. On his second trip in 1798 – 1799 he and Bass circumnavigated Tasmania (then Van Diemen’s Land) in the sloop Norfolk thus proving it to be an island.

While these were important voyages it was his third voyage for which Flinders is best remembered. On this voyage, as commander of the H.M.S. Investigator, he was under instructions from the British Admiralty to study, in detail, ‘the Unknown Coast’ – the southern coastline between the Great Bight and the Victorian border. It was while doing this that Flinders had his friendly encounter with the French corvette, Le Géographe, under the command of Captain Nicolas Baudin – at a spot he named Encounter Bay. More on Baudin later.

After completing his Admiralty remit, Flinders headed north from Port Jackson, South Australia, towards Queensland, mapping the coastline as he did. Despite numerous difficulties with the Investigator he continued on, anticlockwise, returning to Port Jackson on 9 June 1803 having circumnavigated the continent.

Having tried to complete his survey work with a couple of other ships, Flinders determined to return to England in the schooner Cumberland. The Cumberland proved totally unfit for the task leading Flinders to seek assistance en-route, in Mauritius, where he arrived on 17 December 1803, shortly after Baudin had died on the Island.

By this stage England was at war with France and Flinders was arrested by the governor, General De Caen. He spent the next seven years prisoner in Mauritius despite Baudin having asked that assistance be given to any English ship calling into the Island, in return for the hospitality his expedition had received from Flinders at Encounter Bay.

On 11 March 1806 Napoleon approved Flinders’ release but De Caen let it be known that he did not intend to follow the Emperor’s order, claiming that Flinders was a very dangerous man. De Cain held firm until France’s defeat on the island became imminent. Flinders was let leave Mauritius on 14 June 1810.

Despite a British defeat in the Battle of Grand Port -Mauritius (the only French naval victory during the Napoleonic Wars), Britain took the Island on 3 December, 1810. By this time Flinders had arrived back in Britain where, in failing health, he wrote his most famous work – A Voyage to Terra Australis – published on 18 July 1814, the day before Flinders died.

A map of the island continent dated to 1804, on which is transcribed the word AUSTRALIA, was also published on Flinders’ return to England. Based on this map Flinders is credited the honour of having named the continent. 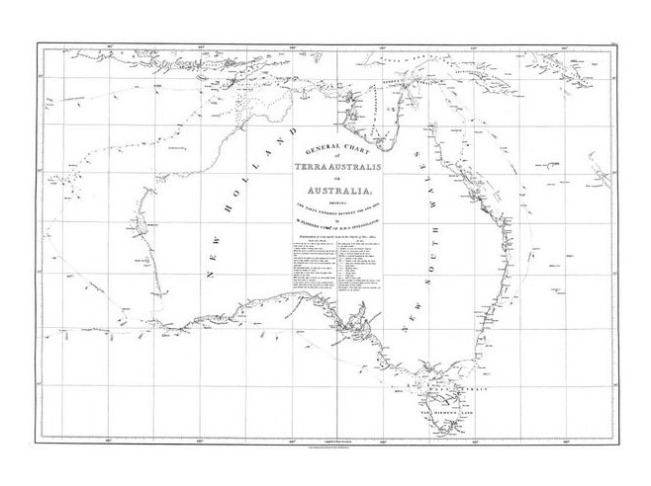 This bronze statue of Flinders, by English sculptor Frederick Brook Hitch, was unveiled in 1934 in recognition of Flinders’ achievement ‘in making known to the world the coasts of the Australian continent, especially those of the State of South Australia.’ – The Advertiser.

The Adelaide Advertiser (13 April 1934) went on to report Hitch as stating that the statue represented Flinders ‘in a calm attitude, contemplating in a general sense the accomplishment of his work of exploration. The telescope and the sextant symbolised his calling of the sea, and the broken mast and strained cables at the back of the base of the statue his misfortunes by shipwreck’.

Two bronze relief panels of Flinders’ journeys can be seen on the statue’s plinth. One shows his route around Australia while the other (right above) depicts his explorations of South Australia and major locations named by him.

Today not only is Flinders remembered by this statue but numerous landmarks in South Australia are named after him including The Flinders Ranges, Flinders Chase National Park on Kangaroo Island, Flinders Street in Adelaide and Flinders University.

In July 2014, His Royal Highness, The Duke of Cambridge unveiled a memorial stature of Flinders, and his cat Trim, at Australia House in London. This statue is destined for a new concourse of Euston Station, in north London, where Flinders’ remains are rumoured to be buried under one of the train platforms (views vary as to which one though 15 is oft touted). One to look out for if you are passing through London – hopefully I will remember to have a look on my visit later in 2017.

One thought on “Captain Matthew Flinders”