The Boer War (1899 to 1902) was the first overseas war in which South Australians fought.

In 1899, the Orange Free State and Transvaal declared war on Britain. South Australia, “fiercely” loyal to the British Empire and still a colony, joined the other Australian colonies in sending troops to support the Empire in the conflict.

1531 men and 1507 horses where sent from South Australia. By the end of the war on 31 May 1902, at least 59 South Australians had been killed. No horses returned to Australia and only a few survived to live out their lives in post Boer War South Africa.

Immediately after hostilities ended it was decided to construct an equestrian memorial which Captain Adrian Jones, a London veterinarian, military officer and sculptor who had an “affinity for animals” was commissioned to build. The 12ft high granite pedestal was separately acquired. The bronze plaques on the sides of the pedestal list the names of 59 South Australians who died in the conflict.

When it was unveiled on 6 June, 1904, the memorial was referred to as the South Australian “National War Memorial”, but the name was later changed to the South African War Memorial after the 1931 completion of a new memorial on the corner of Kintore Avenue and North Terrace, which was built to remember those who served in the first World War. See my separate review on the WWI National War Memorial.

The South African War Memorial is located in front of Government House on the corner of North Terrace and King William Road. It is sited to face in a south-westerly direction so that the setting sun falls on the face of the horseman (modeled on Regimental Quarter Master Sergeant G.H. Goodall, a member of the Australian Coronation Corps in London at the time for the coronation of King Edward VII). 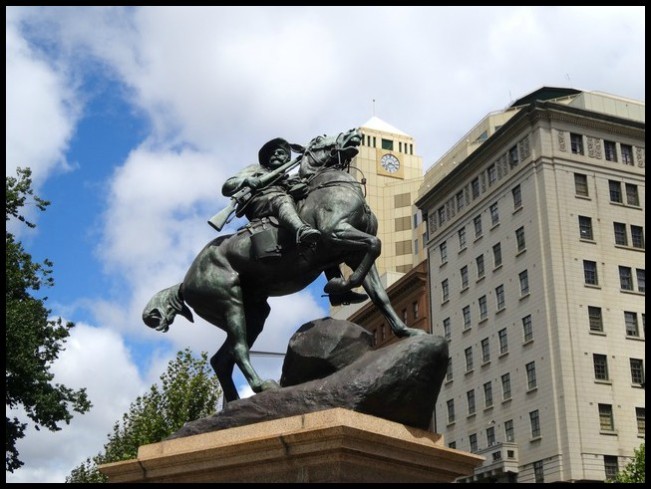 On a visit to Adelaide in December 2013 I read that there are plans afoot to add a ($A47,000) audio system to this memorial such that the horse will talk and relate Boer War stories. This seems a rather tacky plan to me given that this a war memorial but it does remind me of the rather charming talking dog out side the Queen Victoria Building in Sydney (see my seperate review – “Did that dog just talk to me”).

On a more recent visit I heard no mention of this tacky plan and the horse and rider remained quiet as I passed by.