This review is hopefully a logical continuation of my separate review on Old Parliament House – located adjacent to this building. If you have not read it, I suggest you have a look at it before reading this review.

Despite the additional space for members when the new (now Old) Parliament House was built in 1857 members remained unhappy but a shortage of funds meant not much could be done. In 1872 when it was necessary to increase the size of the House of Assembly by ten members, architect E J Woods was engaged to extend the building and, finally, in 1883 work began on this building.

After much delay and controversy (attendant, it seems to me, on all new buildings in Adelaide at the time) the West Wing of the building was completed in 1889 at which time the House of Assembly (Lower House) moved in. It would be another 50 years (1939) before the remainder of the building (the East Wing) was completed and the Legislative Council (Upper House) also moved in. A planned great dome for the building has never eventuated.

I have not yet had the opportunity to take one of the short tours of the building on offer so cannot comment on the interior.

The building itself is in the Classical style and constructed of local South Australian materials – Kapunda marble and West Island granite. I have to say that while it is imposing and reflective of a burgeoning State (burgeoning pride more than burgeoning finances!), I find it a rather dull and dour building. Added to this, given its location on the corner of a very busy intersection and the row of trees in front of it, it is a pain in the proverbial to photograph! 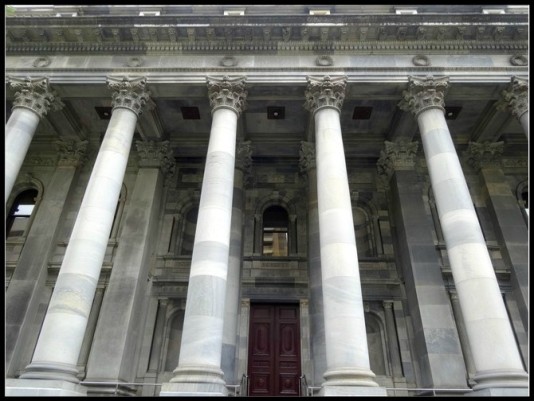 In my second picture you can see, still in place, two cast iron gas lamps (green) made by the Adelaide firm of GE Fulton & Co. Close by, though not visible in that picture, is a carved stone lion (pictured below) from the Palace of Westminster in London – a gift from the United Kingdom Branch of the Empire Parliamentary Association to mark the completion of Parliament House in 1939.

While, as noted earlier, I have not been inside Parliament House I include, below, details on visiting for completeness sake.

The sittings of both Houses are open to members of the public – see website for timings.

When Parliament is not sitting, per the website, a guided tour is available at 10am and 2pm on week days.