Today dwarfed by high-rise buildings on the shore and massive cruise ships on the Harbour, Fort Denison was a barren rocky out-crop when the First Fleet arrived into Sydney Cove in 1788. Called Mat-te-wan-ye by local Aboriginals, Governor Phillip renamed it Rock Island. The island was soon informally christened Pinchgut, in memory of the convicts who were, in the early days of the colony, put there on starvation diets as a form of punishment for their misdemeanours.

On 1 December 1839 two American naval sloops-of-war anchored in Sydney’s inner harbour, unannounced and undetected. This unexpected event which highlighted the vulnerability of one of Australia’s most important cities, stirred Her Britannic Majesty’s representatives in the antipodes into action. Well, not too much action as it was. While they quaffed their gins and tonic, convicts were put to work, in 1841, on flattening Rock Island with a view to building a fort thereon.

Concern about an attack soon diminished and work on the fort languished until the outbreak of the Crimean War in 1854. This brought with it the concern that the Russian Pacific Fleet might invade so work on the fort restarted. The Fort was completed in 1857, by which time the Russian threat (if it ever existed) had evaporated.

Though the fort, named Fort Denison after Sir William Denison, the then Governor of New South Wales, continued to be manned until the 1880s, advances in military technology had made it obsolete from a defence perspective by 1865. 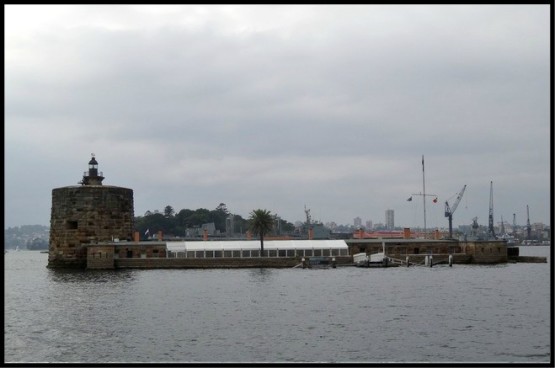 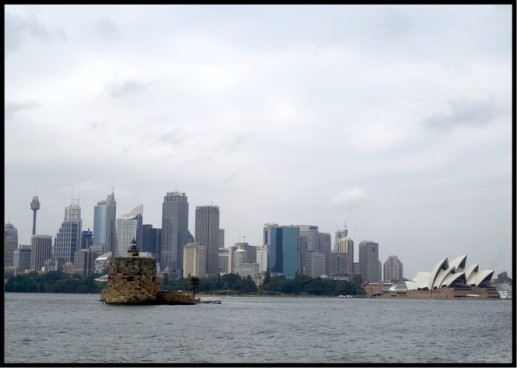 Between 1906 to 1942, the Fort’s cannon was fired daily at 1pm to let sailors correctly set their ship’s chronometer to the local time. The firing ceased in World War II lest Sydney-siders think they were being attacked. Firing of the cannon was not resumed until 1986 by which time sailors had alternative means of verifying the accuracy of their chronometers. The cannon is still fired at 1pm so if you are nearby listen out – especially if you are in Royal Botanic Gardens opposite.

Today the Fort is managed, as a tourist attraction, by the New South Wales Parks and Wildlife Service. Additionally, it operates as a Harbour Navigation Facility.

Unless you have a very specific interest in the military history of the Fort then I suggest you view Fort Denison in passing from one of the many Sydney Ferries which pass by (maximum cost for full day’s travel on all of Sydney public transport is A$15 – $2.50 on a Sunday). I make this recommendation because Sydney Ferries do not stop at the island and the alternative ways of getting there (see below) are a bit on the pricey side if you have only a cursory interest. 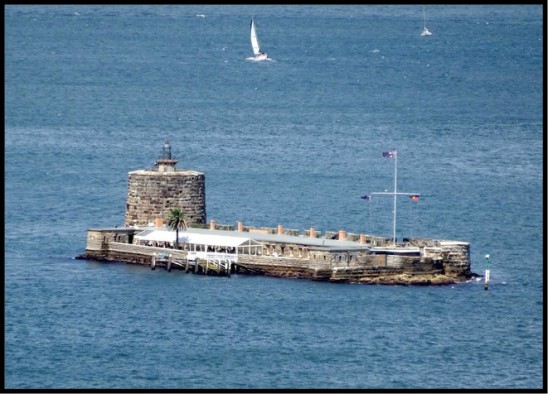 Getting onto the Island

There are three options:

1. Captain Cook Cruises – operate a daily ferry service between 10.30am and 4.00pm from Circular Quay, Wharf 6 or Darling Harbour or Manly or Watsons Bay, Cost A$20 – or A$37.50 with tour included. https://www.captaincook.com.au/sydney-harbour-cruises/ferries/fort-denison-ferry/

2. Use Sydney Hop-on-Hop off Cruise Service (which has 9 stops in total). $45 for a day pass plus an additional island and tour fee, the amount of which I cannot readily ascertain. Also run by Captain Cook Cruises (I suspect the same boat as 1). https://www.captaincook.com.au/sydney-harbour-cruises/hop-on-hop-off/

Lunch (expensive) used to be available on the island but the restaurant closed mid 2017. Check Website below to see if it has reopened.

Note again that Sydney Ferries do not stop on the island.

This is my last Sydney – SYDNEY HARBOUR AND ISLANDS review.
For other Sydney reviews click HERE.