Sighisoara – Let’s Do The Time Warp 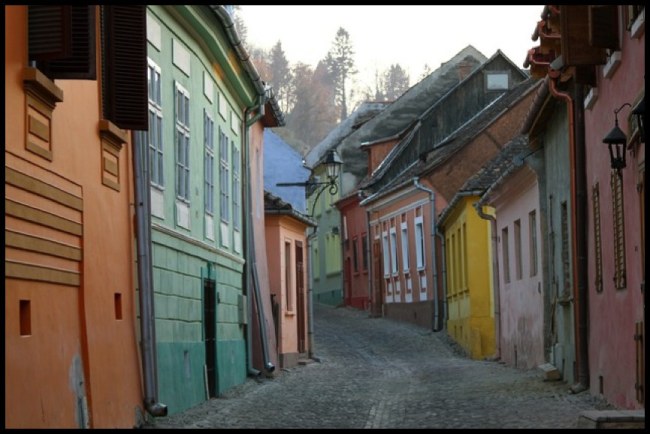 Having watched the Rocky Horror Picture Show the other night and the 2006 Rocky Horror Tribute Show last night I was reminded of my own visit to (transsexual) Transylvania a few years back and the fact that I had not yet shared with my dear Reader here a series of reviews I wrote on delightful Sighisoara.

Located in the famed region of Transylvania, for me Sighisoara is one of the prettiest towns in Europe and while having quite a significant tourist trade it’s still not overrun by them. It is sufficiently far away (unlike Brasov) from Bucharest not to be overrun by weekenders from the city (though some do make it there). Don’t pass it by even if it does mean disembarking the train at 4.30am on a freezing late autumn morning.

Sighisoara was founded by Transylvanian Saxons (German craftsmen and merchants) in the 12th century. The surviving (old) town or citadel is renowned for its nine towers, cobbled streets, burgher houses and churches. Sighisoara is one of the most beautiful and best-preserved fortified medieval towns in Europe and is a UNESCO World Heritage Site.

While one of Brasov’s (or rather nearby Bran’s) claim to fame is being the location of the famous “Dracula’s Castle” – the subject matter of many recent travel shows in Australia (my home) and doubtless elsewhere – Sighisoara claims to be the birthplace of Vlad Dracula, aka Vlad Tepes, aka Vlad the Impaler, ruler of the province of Walachia from 1456 to 1462. Vlad inspired Bram Stoker’s fictional creation, Count Dracula.

While the town certainly cashes in on this association with Dracula it is definately not overdone and such as there is here relating to Count Dracula is tacky to the extent of being fun.

While not personally a major Dracula fan I was however rather hoping though that I might run into Dr. Frank N Furter, Riff Raff, Magenta, Colombia, Eddie, Rocky Horror or even Brad Majors or Janet Weiss – Dammit!

Anyway, so now with apologies to Richard O’Brien and the many narrators of the Rocky Horror Show down the years ———

I would like, ah, if I may, …to take you on a strange journey. It seemed a fairly ordinary night when I and my partner, two not so young, ordinary, healthy chaps, left Budapest that late autumn evening on a night train, bound for Transylvania. It’s true there were dark storm clouds, heavy, black, and pendulous, towards which we were heading. It’s true, also, that the food we might have been served would be lacking and badly in need of some taste, but, uh, we were not going to let a storm or bad food spoil the events of our evening, were we?… On a night out… it was a night out we were going to remember… for a very long time.

Do join me next time on that Night Train to Transylvania… and from which point you will hear no more of Rocky Horror, unless, of course, you ask!

This blog entry is the first in a group (loop) of reviews on Sighisoara, Romania which I recommend you read in a particular order starting with my next entry – HERE.

5 thoughts on “Sighisoara – Let’s Do The Time Warp”