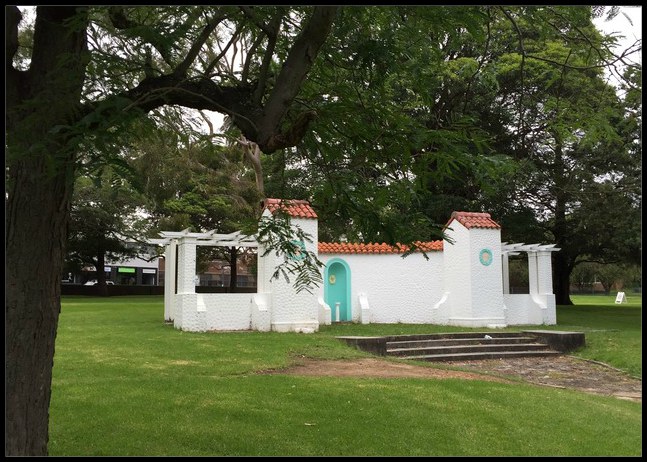 This war memorial, in the grounds of the former Callan Park Hospital for the Insane (later the Rozelle Hospital and now the Sydney College of the Arts and part of the University of Sydney) stands out from all other Australian War Memorials that I have seen.

Its appealing Spanish/ Mediterranean rough white rendered walls with tile coping immediately caught my eye when I first entered Callan Park for a stroll. Ok, I was taking my dog out for a pee. I came to be here as I was staying nearby at the excellent Darling Street Apartments.

The memorial, constructed in 1925, was designed by Raymond McGrath, son of the assistant manager of the park, who had, at the time, not long graduated from the University of Sydney. In 1926 McGrath moved to the UK and later to Dublin where he eventually became Principal Architect with the Office of Public Works.

Try as I might, I have been unable to determine why the Memorial was built in the style it is. Indeed, I could find out very little about it more generally.

In terms of dedications, there are two plaques, each surrounded by a moulded concrete garland of Australian gumnuts, leaves and flowers. One plaque is located on each side of a central fountain which, sadly, appeared to have been vandalised and was inoperable when I visited.

The plaque on the right hand side (picture 5 above) is dedicated to ‘To Those Who Served’ – I presume during WWI, as below this is a short citation from Rupert Brooke’s sonnet, ‘The Dead’. Brooke was an English poet known for his idealistic sonnets, written during WWI.

Getting there by bus
While there is a bus stop close to the entry on Balmain Road buses from here follow a very circuitous route into the city taking the best part of an hour. About 500m metres walk from Callan Park/ Memorial is a bus stop (Victoria Road after Darling St) on Victoria Road which services numerous buses all of which will take you into the city, at least as far as Town Hall in about 10 minutes.