Church of St John the Baptist 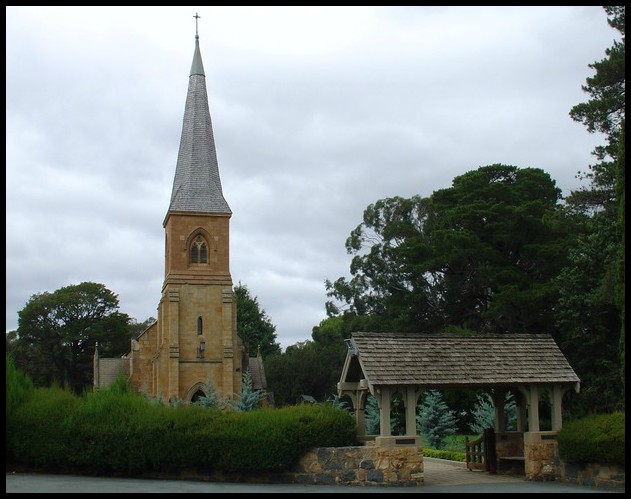 The Anglican Church of St John the Baptist in the inner suburb of Reid is Canberra’s first church and actually pre-dates Canberra by around 70 years. The Church (with adjacent graveyard and school) are built on land donated by the Robert Campbell of Duntroon (one of the first European settlers on the Limestone Plains) to serve the spiritual, education and social needs of the pioneering farming community. A cradle to grave support. 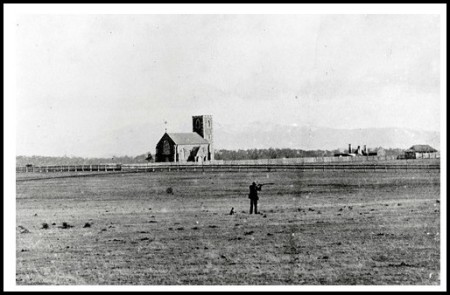 The foundation stone for the church as laid on 11 May 1841 by the Rev. Edward Smith of Queanbeyan, who was the first resident clergyman in the district and who, according the Sydney Morning Herald, interred a “Bible and Prayer-book, a vase containing papers, bearing a date and a plate (metal?) ……” It is not known where this was laid so I guess it has become a time capsule without an opening date – something for future archaeologists to discover.

The second picture above is an early photo of St Johns taken prior to the addition of the spire in 1878.

Acknowledging its role in meeting the needs of pioneer settlers the Rev Smith remarked:

The Church, built in the Gothic Revival style using a combination of local bluestone and sandstone from Mt Pleasant and Black Mountain was consecrated on 12th March 1845 by the Rev William Grant Broughton, the first and only person to hold the title of Bishop of Australia. 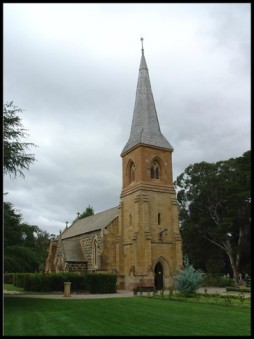 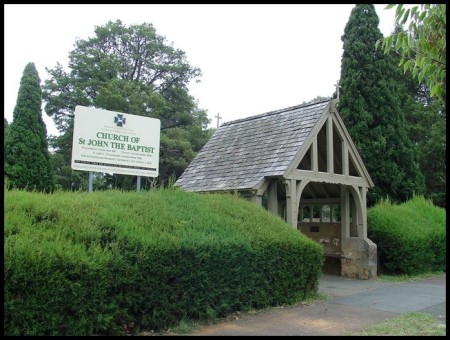 The original church tower developed a two-foot lean and was dismantled in 1864. A new tower, designed by Edmund Beckett a distinguished New South Wales architect, was erected between 1865 and 1870 and the current spire was added in 1878. 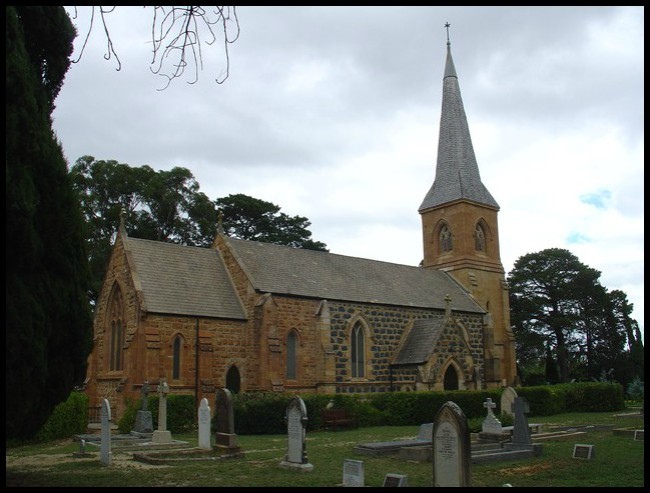 Internally the church is small (though it would have been considered massive in 1845 – even without its 1874 extension) and has a very homely and restful feel – good attributes for a church. It is packed with memorials commemorating not only local parishioners but also many others active in the life of Australia. Other things to have a look at include: 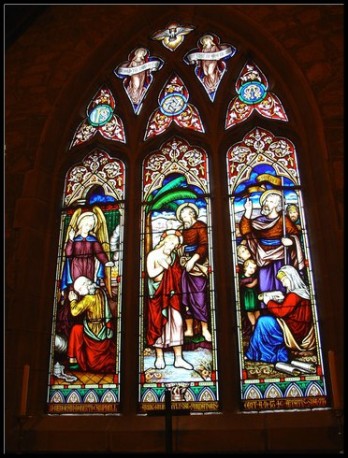 Designed by William MacLeod and made by the Sydney firm of John Falconer, it is one of the earliest Australian stained-glass windows. It was a prize-winning window at the Sydney Exhibition in 1873 before its installation here the following year.

The three main panes depict scenes in the life of John the Baptist, On your left is St John’s father, Zechariah, priest in the temple, as he heard the angel’s announcement of John’s birth in the coming year. In the centre is John baptising Jesus in the River Jordan. On your right is John proclaiming Jesus as the Lamb of God.

Directly underneath the centre pane you can see the Campbell Family crest and motto ‘AGITE PRO VIRIBUS’ – ‘work with all our might’. The window is a memorial to Robert Campbell of Duntroon who inspired the building of St John’s and who was a generous benefactor of the church. 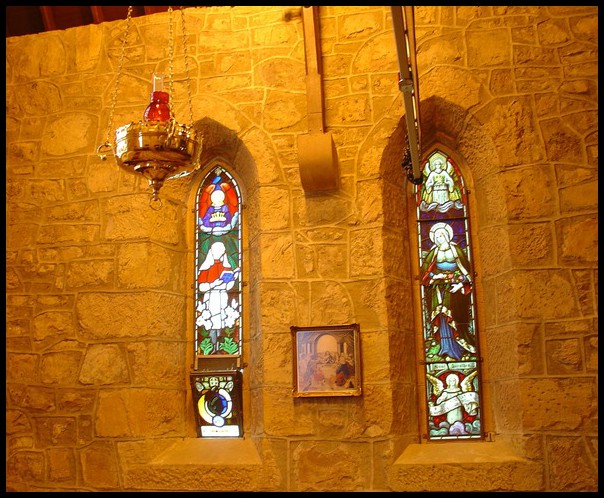 The smaller window to the right of the altar is a memorial to Sister May Hayman who was regular parishioner of St John’s before joining the New Guinea Mission in 1936 where she was killed during WWII.

Located on the walls on either side as you enter the church are three stones as depicted in the montage below. 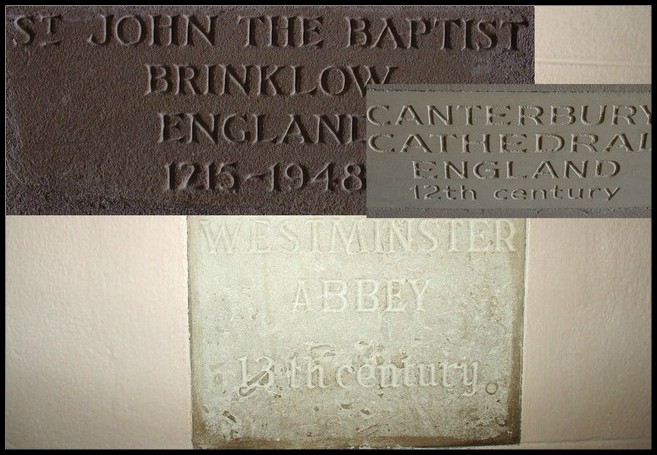 The stone on the right (top left in montage) is from the Church of St John the Baptist in Brinklow, Warwickshire, England. A stone from St John’s, Canberra, rests in the Brinklow Church. The stones were exchanged in 1948 when the Bishop of Goulburn visited Brinklow.

On the left (bottom in montage), is a stone sent from Westminster Abbey,  London serving as a reminder of the church’s  links with other parts of the Anglican Communion. It was set into the wall just prior to Her Majesty, Queen Elizabeth IIs visit to St John’s in 1954.

The third stone (right in montage), from Canterbury Cathedral was presented to Canon Ward of St John’s at some stage between 1913 and 1927 from the Dean and Chapter of Canterbury. 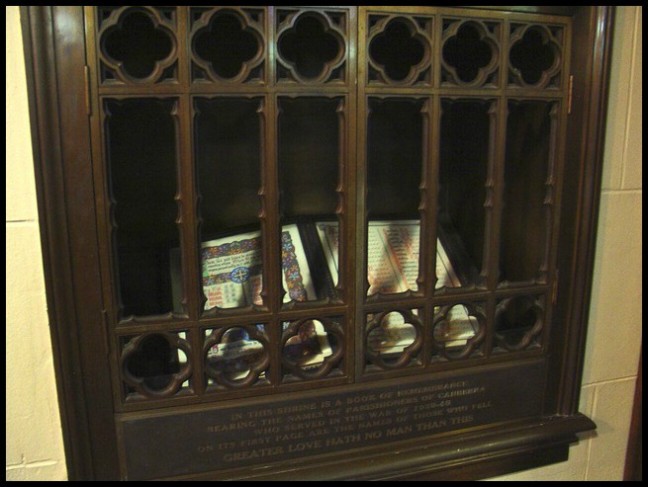 This book includes the names of Anglicans from the Parish of Canberra who served in World War II. 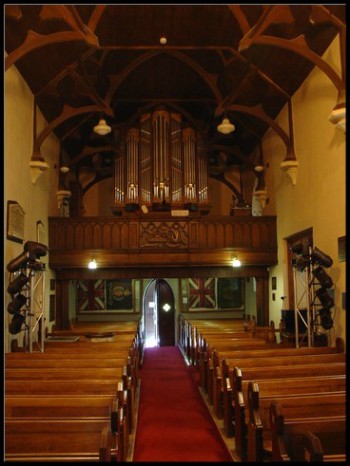 In the gallery as the rear of the church is the organ installed in 1981. It was designed and built by Ronald Sharp, the creator of the Sydney Opera House Organ.

The Font was a gift of Charles Campbell (son of Robert Campbell).

While the exterior of the church and the graveyard can be viewed at any time the interior is open daily from 9am to 5pm. Admission: Free.

I have to admit to having a fascination for visiting graveyards. Nothing morbid I assure you. It is just that one can learn so much about an area just by wandering around a graveyard and that at St John’s is no different. 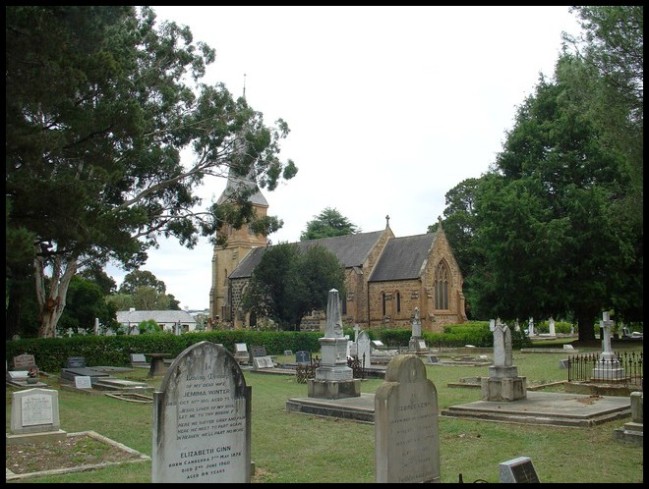 This immaculately maintained graveyard was consecrated in 1845 – the same time as the church – and contains the mortal remains of many of Canberra’s pioneers together with many latter day notables. Since 1845, over 900 burials have taken place in St John’s graveyard. The cemetery was closed for new burials in July, 1937 though burials still occur for families who own Exclusive Rights to burial plots.

Readers who have read others of my Canberra reviews will have noticed constant references to the Campbell Family – one of the first settler families in the Canberra area and certainly one of the largest landowners. The land for the graveyard, church and schoolhouse (separate review) was donated by Robert Campbell – the first of the family to call Canberra home. While Robert is actually buried in Sydney a large number of his decedents found their resting place here (below left). 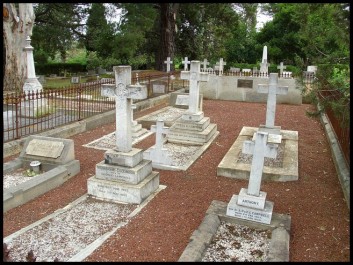 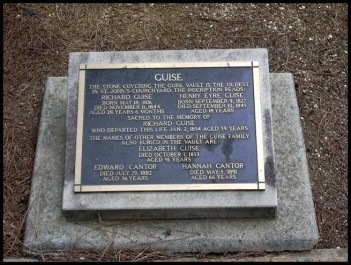 Richard Guise, aged 28, who died in 1844, was re-interred in the Guise vault in 1845. This is the first marked grave in the graveyard The original headstone became unreadable and a bronze plaque listing the six members of the family buried in the vault was installed in 1991 (picture above right).

Sir Robert Garran died on 11 January 1957 and is buried here. He was Solicitor- General of the Commonwealth from 1917-1932 and played an important role in the framing of the Australian Constitution (picture below left). 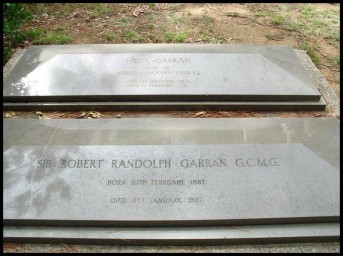 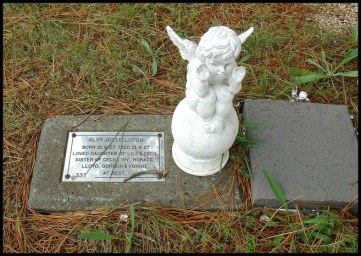 My final picture reminds us that not everyone gets to make it to old age. Little Alvy Joyce Luton died at less than a month old. A beautiful little tombstone (about 30cm high).

Address: Cnr Constitution Avenue and Anzac Parade West Reid
Directions: Can also be accessed via the rear entrance from Anzac Parade. Combine a trip to the Church, Schoolhouse and graveyard with a visit to the memorials on Anzac Parade
Phone: (02) 6248 8399
Website: http://www.stjohnscanberra.org

10 thoughts on “Church of St John the Baptist”