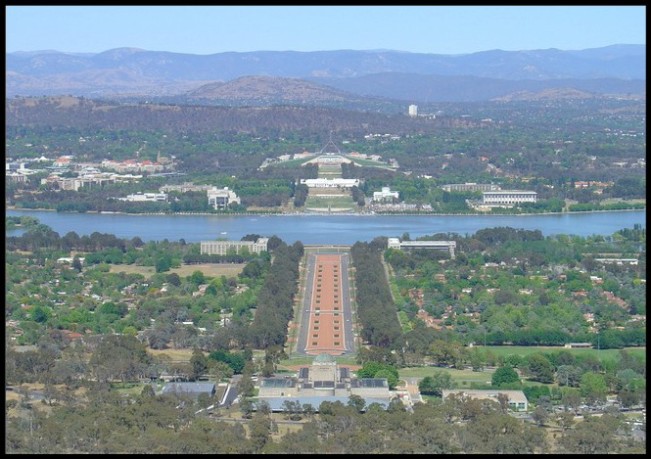 This lookout on the top (approximately 840m above sea level) of Mount Ainslie is the best place for a stunning view of Canberra. Great at dawn or dusk but good any time of the day. It affords an excellent view from the Australian War Memorial, across Lake Burley Griffin and on to the Brindabella mountain ranges in the background.

Mount Ainslie is named after James Ainslie, a 19th century settler who was the overseer at Duntroon, a large pastoral property in the area. The lookout marks the northernmost point of a land axis, planned by Walter Burley Griffin, which takes in the Australian War Memorial and the Old and New Houses of Parliament.

Beauty of location was a key factor in choosing a location for Australia’s Capital city and this location was chosen by Surveyor, Charles Scrivener. It was Scrivener’s vision that the demure Molonglo River be dammed and transformed into an ornamental lake for the new city. Walter Burley Griffin incorporated this vision into his plan, but it wasn’t until the 1960s when the dam (bearing Scrivener’s name) was constructed to convert the vision to reality.

You can clearly see from the lookout that Canberra is a planned city. You can also see, from the abundance of greenery in the city and surrounding suburbs, why Canberra is often referred to as the Bush Capital.

The structure on the actual summit, behind you as your admire the city view, is a rotating aircraft beacon.

Apart from ample car parking and a viewing platform there are no amenities at the lookout. In terms of getting there you drive, cycle (difficult ride), take a taxi or walk. There is no public transport to the summit.

I recommend, if you are of average fitness, walking. The track is safe and in very good condition. It begins at the back of the Australian War Memorial – allow an hour for the walk up – less for coming down. Along the way there are a number plaques commemorating World War 2 battles. If you’re an early riser start your walk in the early morning (increases your chances of seeing kangaroos) and aim to be back down at the War Memorial at 10am when it opens. Refer to my review Walk up Mt Ainslie.

So as not to mislead you with the kangaroo picture – It is unlikely you will see kangaroos on the summit or from the summit track – you need to veer of the summit track to one of the other less used tracks and go up early morning or around dusk.

Other good views of Canberra can be had from Red Hill and Black Mountain Tower.

One thought on “Mt Ainslie Lookout – Best View Of Canberra”