Gibraltar Falls, one of the highest in the Australian Capital Territory, is a 50m high set of cascading falls in the northern part of Namadgi National Park, best combined with a visit to Tidbinbilla Nature Reserve rather than other parts of Namadgi, due to logistics of getting there.

The Falls are easily accessed by a short (150m) though rough, rock strewn walk down from the well signposted car park, just off the Corin Rd. The falls are not wheelchair accessible. The path down is fenced so keep to it for your own safety and do not leave the Falls’ viewing platform. There is no safe access to the base of the Falls from here. Given the relative proximity of the viewing platform somewhere in the middle of the Falls’ overall descent, I found it difficult to capture the full drop of the falls without a wide angle lens but hopefully the attached pictures give you a flavour of these picturesque falls and the surrounding area.

Water flows here all year round, unless you hit on a time of extreme drought. Given the permanent water supply one can find a few plant species here which are not common in these parts including Mother Spleenworm, Varnish Wattle, Creeping Bossiaea and Black She-oak. 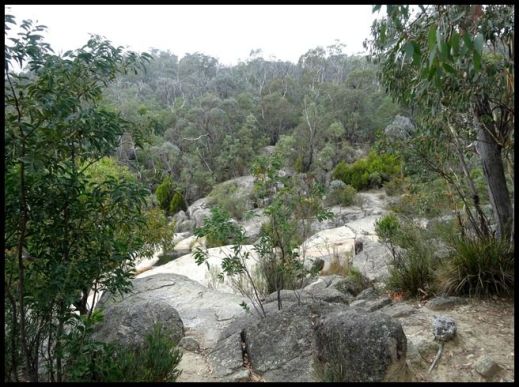 At Top of Falls

In addition to the short walk to the Falls there is a 1.2km walking track, again from the car park, down to Woods Reserve Camping ground (named after the first European family to settle in the area in the late 19th century) further down the Gibraltar Creek. Please note that again this track does not give you direct access to the base of the Falls. Access to the base of the Falls is best left for more experienced and properly equipped bushwalkers.

There is a small picnic area adjacent to the car park which offers limited seating, a gas (pay) barbeque, and pit toilets. This is not a bad spot for a picnic, but you might also want to consider the nearby Corin Forest Mountain Retreat which also has a picnic area and a reasonable café offering great pizzas though it has restricted opening hours.

This blog entry is one of a group (loop) of entries on Namadgi National Park.  To continue with my next entry chick HERE.