Ring Barking in the Bobeyan Valley 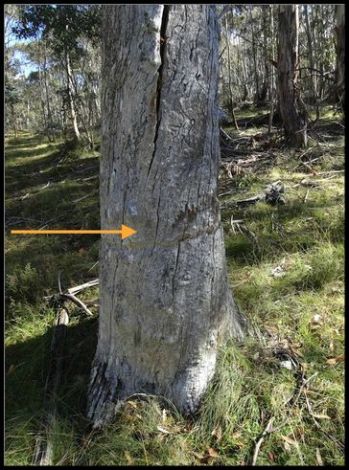 One of the wonderful things about travelling is that one continually comes across, and learns new things. As I was making my away around along the Settlers Track in Namadgi National Park I noticed that many trees, all dead, has ‘rings’ around them, about a metre up from the ground.

When pastoralists settled in this area from the 1830s it would have been a lot more wooded than it is today. The flora would have taken the form of grasses, shrubs and trees. While the grasses, shrubs and smaller trees were relatively easily removed to open up/ increase land for cultivation and grazing, larger trees presented a more significant problem, in these pre-chainsaw and bulldozer days. While a certain amount of land clearing here would have been at the behest of the settlers some of it was driven by the government of the day. Land reforms in the 1860s and 1880s required a more intensive land use necessitating an increase in land clearing. 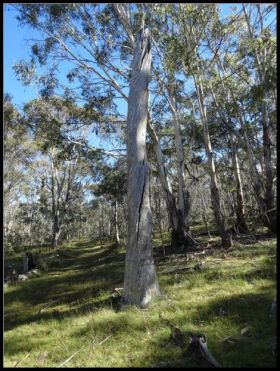 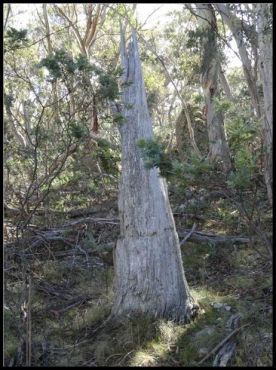 In addition, native trees, and in particular gum trees, suck up a significant amount of moisture from the ground and their canopy prevent light from getting through to a wide area around them.

The early settlers approach to getting rid of an unwanted large tree was to chop a ring around the base of the tree with an axe, removing the bark the whole way around the tree – ring barking (or girdling).

This removal of the bark caused the tree to die as the inner layer of the bark, the phloem, is, as I understand it, the only living part of the tree trunk. The phloem carries nutrients in the leaves down to the roots. If that path is cut by removing the bark in a ring around the trunk then no nutrients can reach the roots, and the tree dies.

Of course, European settlers also used (and continue to use) fire as a means of clearing land in much the same way as Aboriginal people have used it for thousands of years.

Were it not for the fact that it would be illegal to do so, I would be tempted to apply this newly learned technique to the gum trees on the nature strip (roadside verge) outside my house!

Keep an eye out for these remnant ring barked trees as you make your way around the Settlers Track. They are particularly prevalent between Brayshaw and Waterhole Huts.

This blog entry is one of a group (loop) of entries on Namadgi National Park.  To continue with my next entry chick HERE.