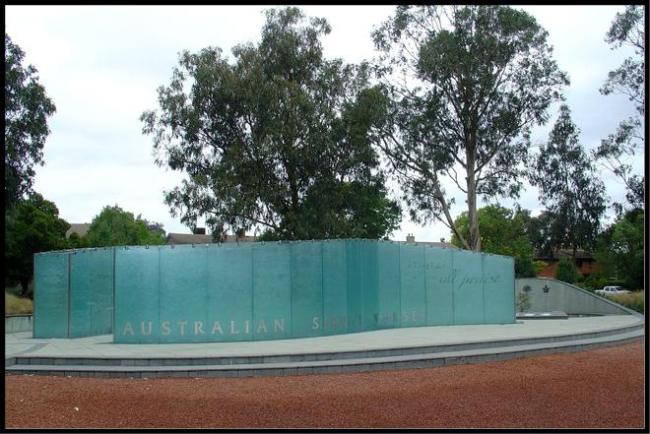 This Anzac Parade memorial was unveiled by Governor-General, Sir William Dean on 2 October 1999 to mark 100 years of military nursing and to honour those who served, died and suffered in war.

Military nursing in Australia was established in 1899. In January 1900 fourteen nurses left Sydney for the Boer War. Since then, service nurses have played an important role in every major conflict in which Australia has been involved.

The memorial, designed by Robin Moorhouse and unlike all others on Anzac Parade, is horizontal, flowing in form and nurturing in character with two curving lines based on the female form. A time capsule containing the names of the many service nurses who have died in war lies beneath the entrance to the memorial.

This memorial is made of cast glass with text and images etched and cast into the inner glass walls, in a timeline sequence, portraying the history and contribution of Australian Service Nursing. Some panels are intentionally blank reminding us that the work of Service nursing is incomplete and ongoing.

How do we measure the value of the service nurses over the years – their human dignity and worth, their dedication in bringing succour and care, their commitment beyond self, their courage, their companionship and their fortitude? For me it is well and simply summed up by the narration on the front wall of the memorial – “beyond all praise”.

Do sit down in the area set aside for private contemplation and think about these unsung heroes.