National Aboriginal War Memorial or Not?

Each year on ANZAC Day (25 April) thousands of veterans, serving personnel and members of the general public attend the dawn service at the Australian War Memorial in Canberra to remember those who have served and those who have paid the ultimate sacrifice for Australia in various wars and conflicts down the ages.

When the dawn service is over a small group of veterans and others make their way into the bush to a small clearing on the slopes of Mt Ainslie some 300 metres behind the War Memorial. A second service of remembrance is held here (and has been for nearly 20 years), at the Aboriginal War Memorial plaque, to remember Aboriginal people who have served in the Australian forces.

Until 1967 Indigenous Australians did not have the right to vote and were not included in Australia’s census counts.

This effective non-recognition of Indigenous Australians as Australian citizens was particularly troublesome for the authorities when it came to them serving, or not, in the armed services.

At the outset of WWI Indigenous Australians who tried to enlist were rejected on grounds of race though some slipped through. As the war progressed and more servicemen were needed (a conscription referendum was defeated) restrictions were eased and a new Military Order permitted that “Half-castes may be enlisted in the Australian Imperial Force provided that the examining Medical Officers are satisfied that one of the parents is of European origin.” It is thought that over 1,000 Indigenous Australians fought in WWI. Prior to WWI and Australian Federation in 1901 many has served in colonial forces, most noticeably during the Boer War between 1899 and 1901.

I should point out that the difficulty in determining the number of Indigenous Australians who have served in the armed forces is due to the fact as ethnicity of enlistees was not documented.

Australia’s main national war memorials are on Anzac Parade and are, in the main, rather grand affairs. I have written separate reviews on each of them with a summary review ANZAC Parade – Memorials. These memorials which are focused on particular wars, campaigns or parts of the Australian armed services represent and commemorate all Australians – indigenous and non-indigenous.

There have, nonetheless, been and are ongoing calls for a specific Aboriginal war memorial to be erected on ANZAC Parade. Regrettably, this is as much a political hot potato as it is anything else – and as such I leave it to my readers to draw their own conclusions.

The current privately erected non-official (though accepted) memorial plaque was erected in 1994 and is a very simple, though moving tribute and certainly worthy the short detour from the Australian War Memorial to see it. In many senses the simplicity and the bush setting of this plaque makes it even more poignant than the much larger and more formal memorials on ANZAC Parade. 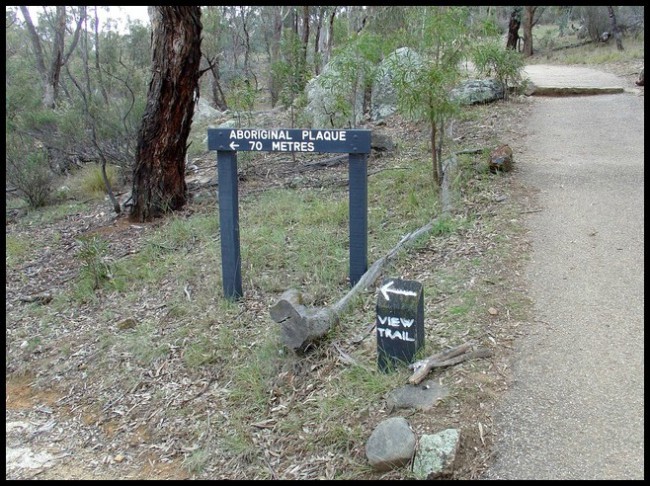 To get to the memorial plaque, take the summit path to Mt Ainslie from the back of the War Memorial for about a hundred and fifty metres and you will come across a sign directing you to the Aboriginal Plaque, 70 metres to the left of the summit track.