The Aircraft and ANZAC Halls at the Australian War Memorial are especially built additions to the main War Memorial building to house the Memorial’s larger exhibits.

Making your way through the Memorial, and having passed through the Hall of Valour, you will first encounter the Aircraft Hall where you will find a number of aircraft on permanent display. These include a Mosquito, Kittyhawk, Mustang, Zero, Wirraway, Sea Fury, MiG-15, Avro Anson, and a Japanese Oscar (wreck). Of particular interest in this Hall is a permanent exhibition ‘Air power in the Pacific, 1941–53’ which details the use of air power during World War II and in the Korean War.

Moving on into the cavernous ANZAC Hall you will encounter yet more aircraft, a Japanese midget submarine and various other pieces of military hardware.

The primary difference between this Hall and the Aircraft Hall, and indeed the rest of the Memorial, is the use of light and sound here to bring the exhibits to life. There are currently four sound and light shows which take place as various times during the day (watch them from the balcony level for best effect). The timings for the short shows, detailed below, are extracted form the Memorial’s website and are current as at 25 April 2015.

This show (it and the Sydney Under Attack are my favourite shows) features the Lancaster bomber ‘G for George’  (main picture above) and three German Messerschmitt fighter aircraft in the recreation of a night-time operation over Berlin in 1943. G for George, one of the Memorial’s most popular exhibits, took part in ninety operational missions over Germany and occupied Europe between 1942 and 1944. 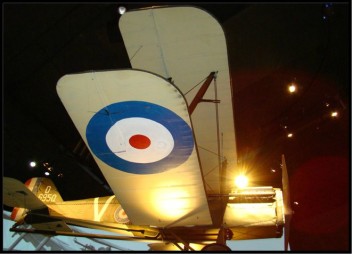 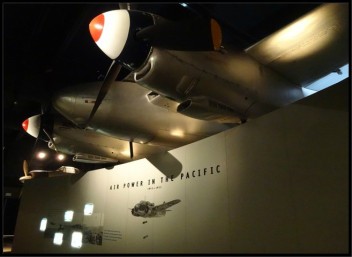 Over the front: the Great War in the air

This show brings to life five of the Memorial’s WWI aircraft (for those more learned than me – three Allied planes (SE5a fighter, Airco DH9 bomber, Avro 504K trainer) and two rare German fighter planes (Albatros D.Va. and Pfalz D.XII)). I am always amazed how these flimsy flying machines of wood, canvas and wire could even fly let alone aid in the war effort.

Sydney under attack alternating with Our first naval victory

Australia’s first and only direct enemy attacks were in World War II – the Japanese bombing of Darwin in the Northern Territory and an attack on Sydney Harbour using midget submarines. This show brings to life the Memorial’s midget submarine, which is actually an amalgam of two of the three submarines which attacked Sydney, resulting in 21 deaths, under the cover of darkness on the night of the 31 May 1942.

I have not seen this show so cannot comment on it and indeed do not know what is it about. Something to put right on my next visit!

For those feeling peckish, or indeed hungry, ‘The Landing Place’ cafe is located in Anzac Hall on the upper balcony level. It is open from 10:30 am – 4.30 pm daily and is fine if a little overpriced. I prefer it to the much larger Poppy’s Café located in a separate building beside the War Memorial.